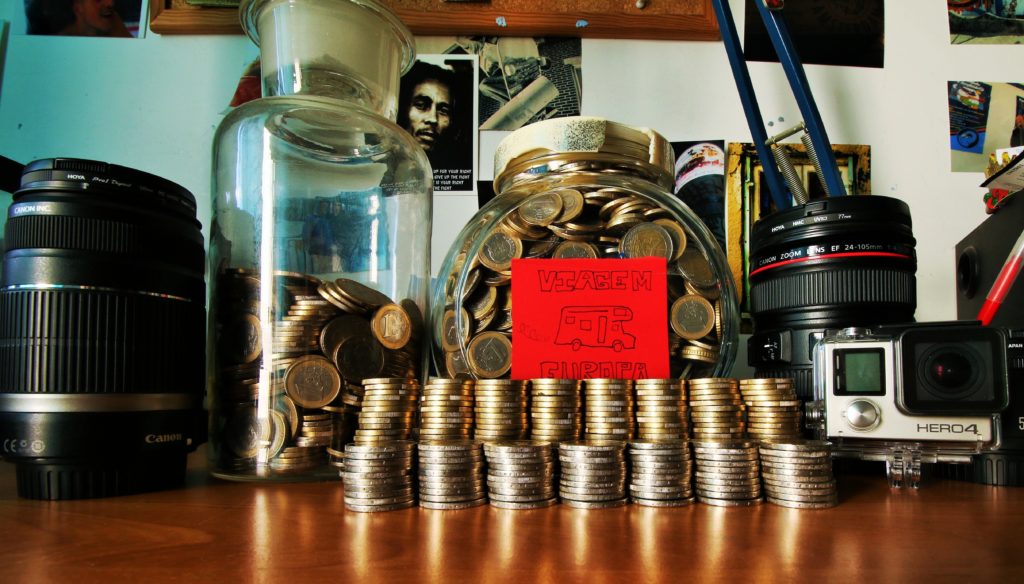 Money, whether we like it or not, turns out to be an important part when you are thinking about making a trip of this type-

Is many months to travel, many kilometers and the costs turn out to be high for most people. It ends up being the main impediment and the main excuse for many people, unfortunately not all people have the possibility, nor the luck in life to be able to fight for their dreams, or for illness, or for the thousand and one turns that life gives , but for the others everyone has a chance to fight, why not?
We officially started to raise money for this trip in January 2015, and we decided to raise € 20,000, € 10,000 for the caravan and € 10,000 for the trip itself. At the time we had practically no savings, Miguel had stopped college and Rita was studying, and since we do not have rich parents or the lucky to win the euro millions, we had only one chance… work as hard as we could and save money.

Well, that’s what we did and after a year and 10 months we were leaving Portugal, in another article we will explain better how we saved € 20,000 in two years, now let’s talk about the expenses that we had on the trip.
The value of € 20,000 came up almost automatically at the beginning of the planning of the trip, we thought we would spend about € 5,000 on fuel, € 5,000 on others and € 10,000 on the caravan and in the end it was more or less.

That’s what we spent. It is important to say that we were almost always ” low-cost ” only in the end that we spent a bit more because we had to anticipate our arrival in a month, so we decided to go to some restaurants more often and that sort of thing.

However we could have spent less 2000 €, because only in mechanical arrangements during the trip we spent 1500 €, outside other expenses that could have been avoided, although all these expenses are normal to happen in a trip of this type so what we spent turns out to be near the minimum possible for who wants to travel from autocatavana 9 months through Europe.

This can make a lot of difference, for example we were 1 month in the Nordic countries, if we had to make purchases in these countries for this period we could have spent a few hundred Euros more.

The consumption of the caravan was 10.5L / 100km which is very good for a truck of this kind, out of curiosity the average price of diesel was 1.15 € / L. The most expensive place where we put fuel was in Switzerland at € 1.81 / l and the cheapest in Ukraine at € 0.70 / L.
Then the second part where we spent more money was in the supermarket, where we spent € 2170 for 9 months for two people, which gives € 241 per month, € 8 per day, this value is only possible because we traveled by motorhome, if it was another way it is almost impossible for two people to survive traveling through Europe spending only € 8 a day on food.

In the heading ” supermarket ” the greater weight goes to food, which represents almost the total value, we ate normal food, I mean that we have not eat pasta and rice the whole time we had traveled, the only thing we cut was in the meat, and we rarely bought, but this by personal choice.
The following line where we spent the most money, was in the heading ” others ”, this item encompasses everything that is: Eating in restaurants, entrance to monuments, tolls, bridges, amusements, souvenirs and all extras that are not in the other lines .

The money we spent here could have been much higher or a little lower, it all depends on what people want and can spend, being of all the headings to which it is most subjective.
The last place where we spent more money was in the caravan, in total we spent 1943 €, of which 1553 € were in mechanical arrangements. These mechanical arrangements were the result of the 27000 kilometers we made, many of them on poor roads, and due to the age of our van.

The mechanical problems were nothing special, the most serious was a spoiled clutch in Krakow that cost us 500 €, then the rest were small things that in total gave the value of 1553 €

The last big expense we had was in the ferries, in total we caught 7 ferries for the value of 539 €.

We honestly did not find the ferry prices expensive, since there was always a caravan and two people. The longest ferrie was from Stockholm to Turko which lasted 11 hours and the shortest one from Hjelmeland to Nesvik in Norway which lasted 10 minutes.

During the trip, we spent only another 104 € in LPG, which we used to heat the water of the caravan, the heater and the stove.

The total amount we spent in the 263 days was then € 10136, however we would like to leave here another value that is the total of the money that we spent on this before, during, and after the trip,

Litle arrangements when we went back to Portugal – 400€

5 thoughts on “The money stuff”