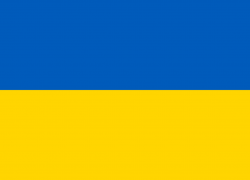 Ukraine was one of the countries that caused us more impact, even though our stay was short.

Ukraine is a very large country. In fact, the 38 countries we have visited this one are the largest, unfortunately we have only been in a very small part of the country, we have only traveled in the western part and in total we have made about 400 kilometers.

We entered the country on a rural border from Slovakia, and it was the first time we passed a proper border (motorhome), they searched the motorhome, and they thought our registration was false because of a misunderstanding in the paper, but nothing that can not be solved later, then they asked us a few questions and stamped our passports …

As soon as we entered, the differences were notorious, the roads were all potholes and there wasn´t a single kilometer with tar in good condition, most of the cars and all buses / trucks were old.

There were no new houses and all the houses / buildings were a bit old, we saw many people living in rural environments, the level crossings were all old, some still with someone to serve as a signalman.

We were in two cities Uzzohord and Mukacheve and were quite different from the rest of the European cities we went to, either in the supermarkets or in the shops.

Only the youngest people speak the minimum of English and the people were nice .. we had a problem with the motorhome and some Ukrainians were concerned about us and help us and they were with us immense time.

Most people looked at our motorhome, either whene we were on the road or parked, some, probably because they had never seen one.

It was also the country we saw the most poverty, people in the middle of the road selling potatoes, in the market many sold food from the land, everything a little “rudimentary”, sell meat on stone benches, milk in water bottles ..

We did not feel insecure or see people with looks or attitudes that could give us problems, but when we are in poorer countries, we are always more insecure and apprehensive to leave the caravan alone.

It was undoubtedly a very different country, both in people, customs, way of being, and visually, practically every place we were in, had some differences with us.

Some photos of Ukraine