The kitchen was a fundamental part of the transformation of the van and we wanted to make it possible to cook what is cooked in a normal kitchen.

Due to the layout of the van, our bench was limited to 140cm. We wanted the kitchen area with a divider for the bed, and it turned out to be the bathroom doing that role, and as we got there the skylight the food smell doesn’t spreads to much inside the van. 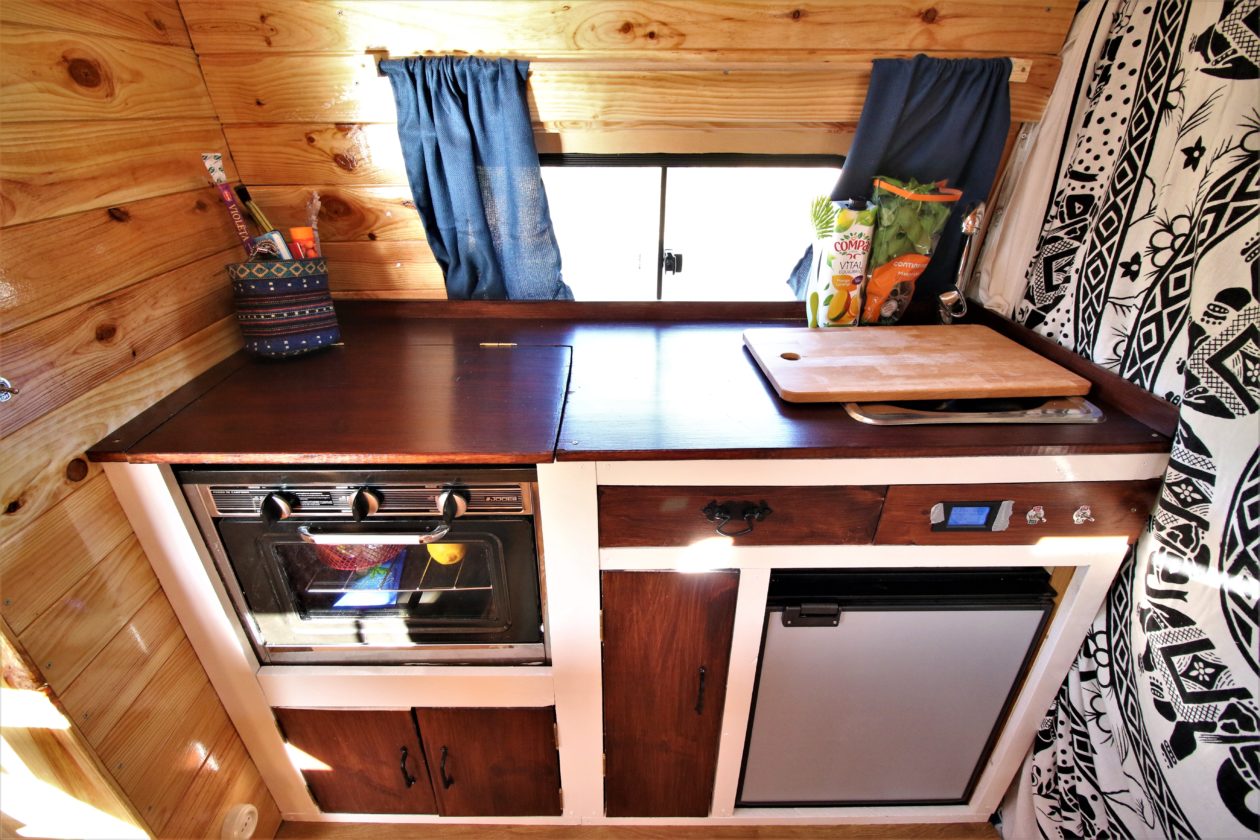 When we decided where we were going to make the kitchen the first thing we thought was to make a window, but when we did, we realized that the work bench to stay at a functional height would have to cover a little of the window itself.

This happened because due to the shapes of the van the window could not go higher, in the end everything was normal and neither inside nor outside you notice anything special.

Having a window in this zone is very important because of the air circulation, if possible one should make a nearby skylight, which is what we did. 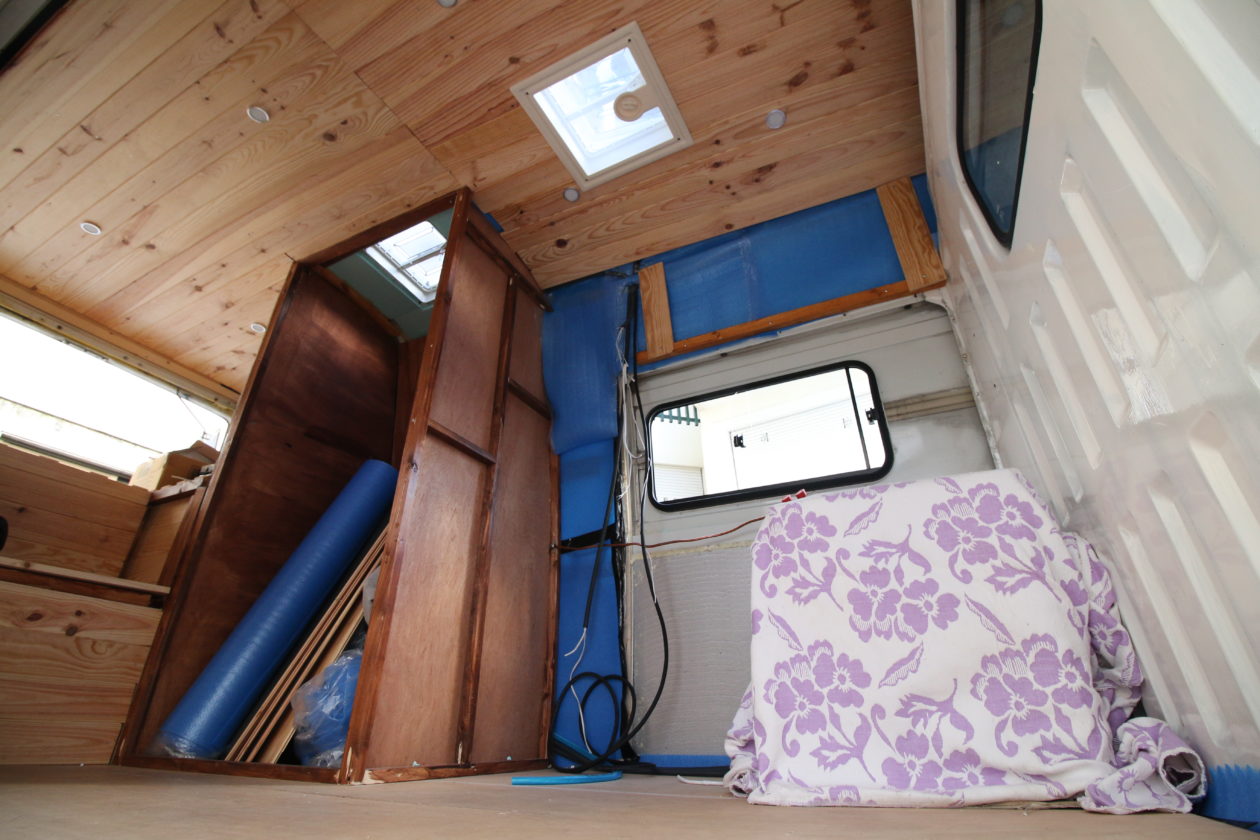 The bench turned out to be 85 centimeters high and 50 centimeters wide which is enough to accommodate the fridge, dishwasher and stove / oven.

Something we wanted very much to have in this van, was an oven because it allows us to make other types of cooking, something that we lacked when we traveled 9 months in a motorhome. 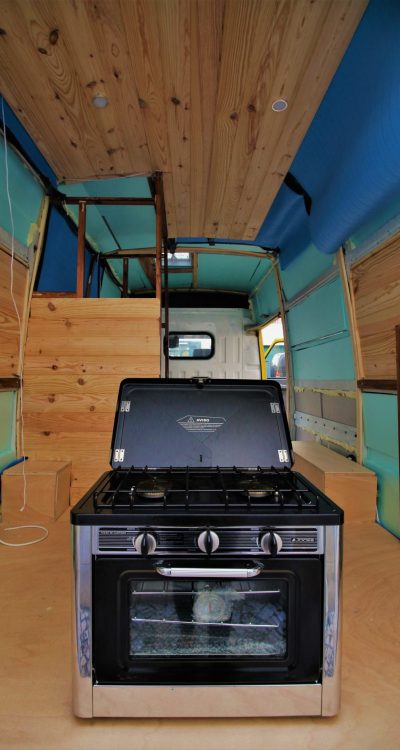 We bought a stove / stove from Jocel, and honestly we are very happy with the purchase.

The cooker nozzles work perfectly, just like the oven, in addition it has the ideal size / weight, the only thing missing is the oven to have Grill.

Note: If you want to legalize the truck and have to go to an inspection, this stove can not be used as it is not supposed to be use inside. In our case we did not have to go to any inspection, but if we had gone, we had tried to arrange a normal one for caravans for inspection only and then put this on. 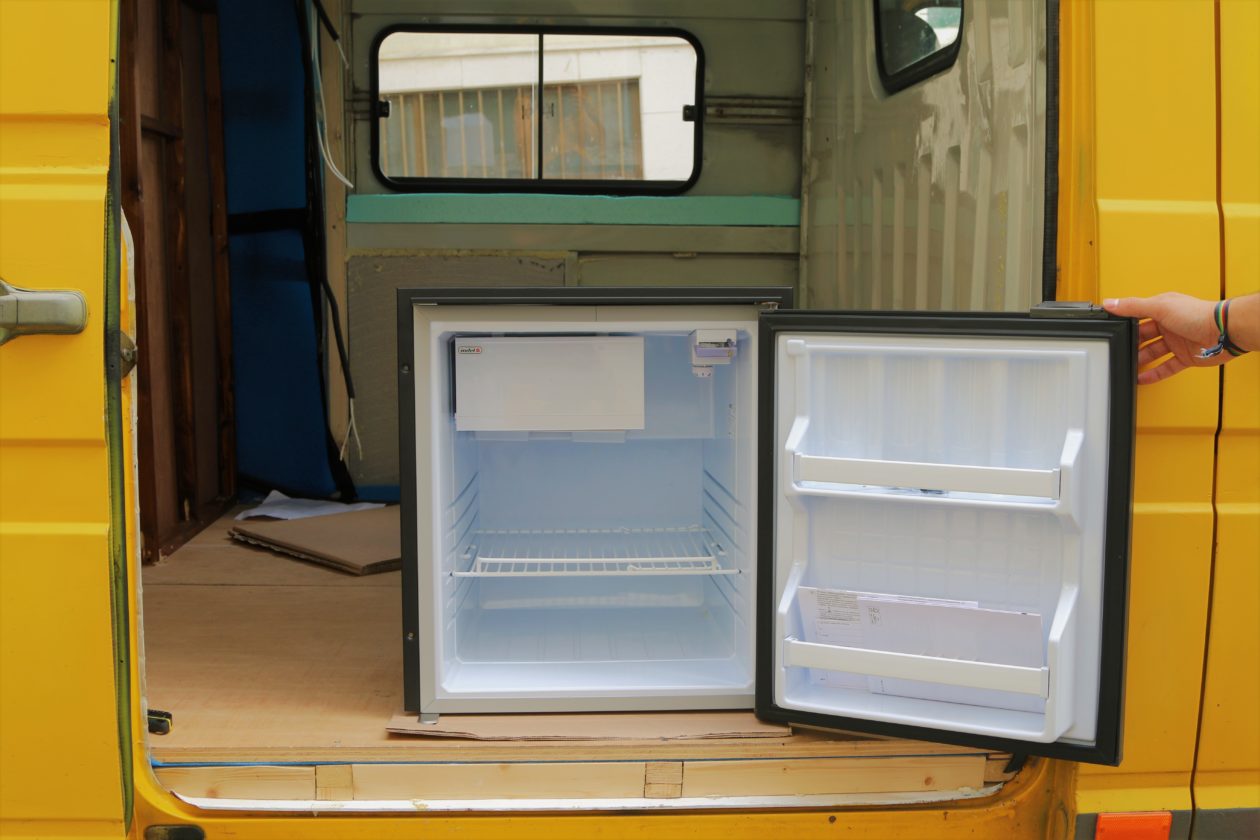 At the refrigerator level we bought a eletric 12v (50w) 65L compressor. We opted for this fridge unlike what we had in our motorhome, which was a trivalent (gas / 12v / 220v) for several reasons.

The first is that so we do not have to be constantly on with the gas on and a flame on, which makes us more comfortable, although we have been practically 9 months with one running that way, no problem.

Finally, performanc.  Cools much more quickly / effectively than absorption, there may be heat inside the van and the sun banging on the back of it, things keep cool. Unlike the absorption (trivalent) ones that heat up.

Another important factor is that if the van was not straigth it works the same, something that does not happen again with the absorption ones. This refrigerator almost requires no ventilation, ie it is not necessary to grill the exterior of the van, nor install extra fans. 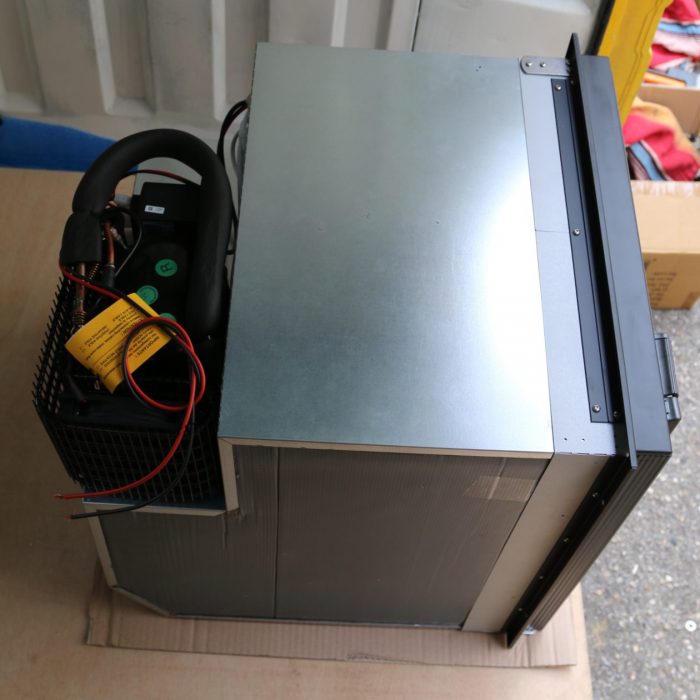 On the other hand there are two drawbacks. One of them is that it makes some noise, if the van was smaller and we slept right next to it we probably already sold it, but since we are in opposite places at night, that’s okay.

Another problem is that although it does not waste gas, it spends electricity, which means that you will need a second battery and a solar panel.

What we have noticed is that it is also difficult not to have a relay that allows the second battery to charge with the movement of the car, so that we have enough energy.

We were already going to install it, but in any case in the two weeks we traveled without the relay, we had a few days of clouds and the battery with the refrigerator turned on, lights, PC charging, mobile phones … tried hard to give reason to consumption what we were doing.

Note: In winter we are not having this type of energy problem, although we do not have the relay, because the refrigerator works much less so we hardly hear it and it spends much less energy. We have had days with rain, and with little sun and even then we managed to be self-sufficient only with the panel if 100W.

The construction of this part was not much planned, what we did was to simply build slowly, starting with the vertical structures. 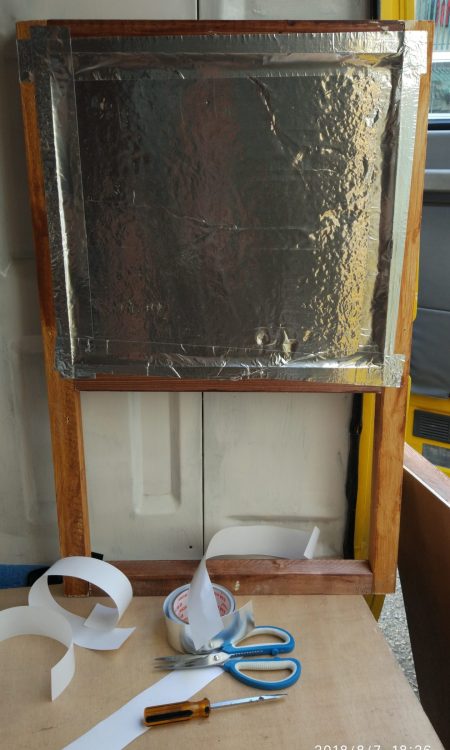 We started by the stove area. As the stove is not too high we made a raised structure with storage underneath. The oven eventually warms up everything around  so we had to protect this area with appropriate anti-flammable materials.

We used rock wool with aluminum foil that holds up to 600º, and we put everything together with aluminum glue tape to be uniform. 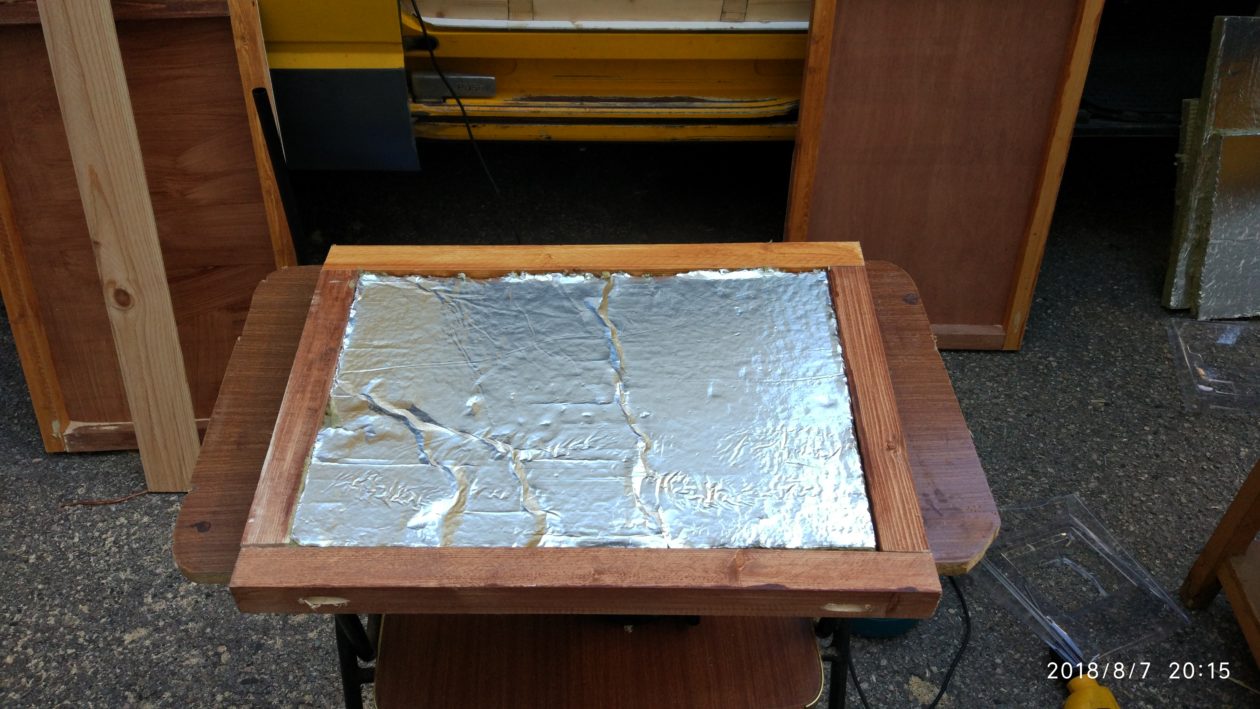 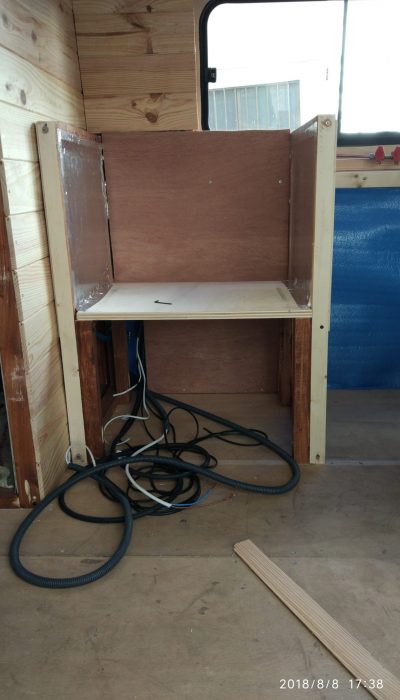 In the photograph you can see that we put another 4 feet to support the part where the stove rests, then screwed this structure directly to the bathroom and to the floor. 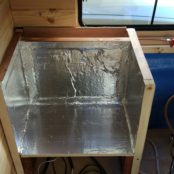 We had to make a hole for the gas hose to pass to the ” rear ” of the furniture. The stove is secured by hardwoods that sit on the front and top. 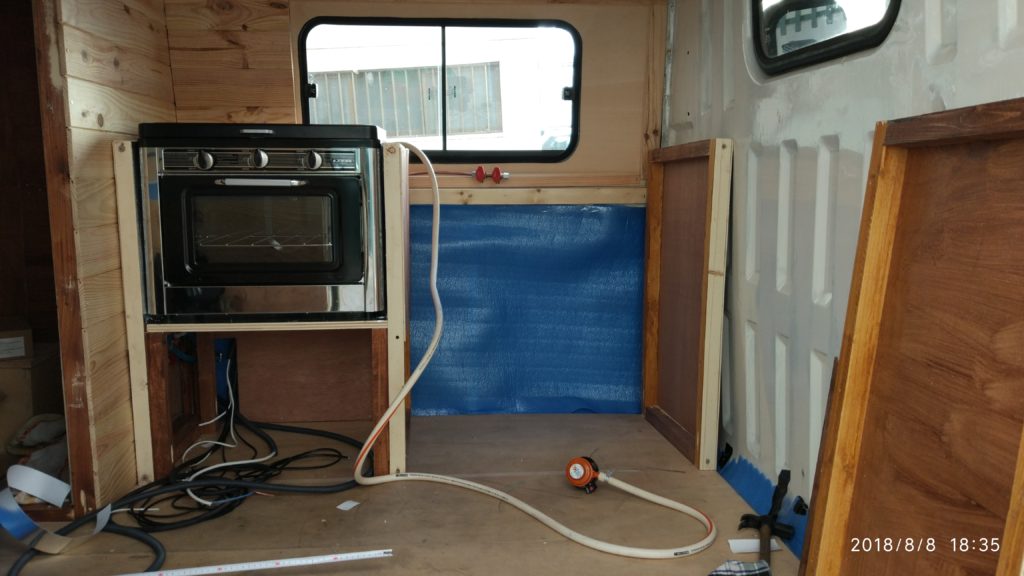 Then we placed the vertical part of the right side, which we screwed to the ground. Then we put the fridge over a bit of insulation to avoid vibrations. 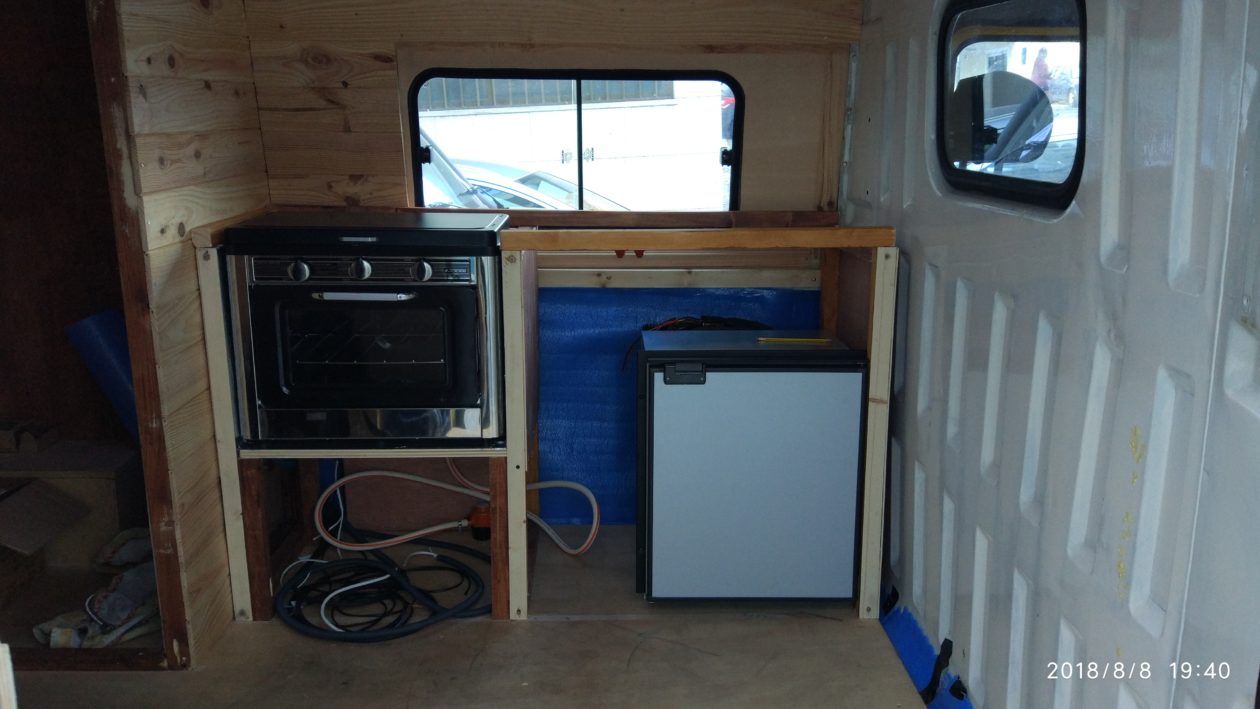 Then join the top parts, with slats 34x34mm, which will be where the bench will sit, we did this to match the end of the stove.

As we wanted to have a drawer in the top, the 3rd vertical support had to be shorter, it is made to lock the refrigerator. In order to avoid vibrations, we added a horizontal slat.

Between the refrigerator and the stove we decided to have the electrical system, here’s how we did it. 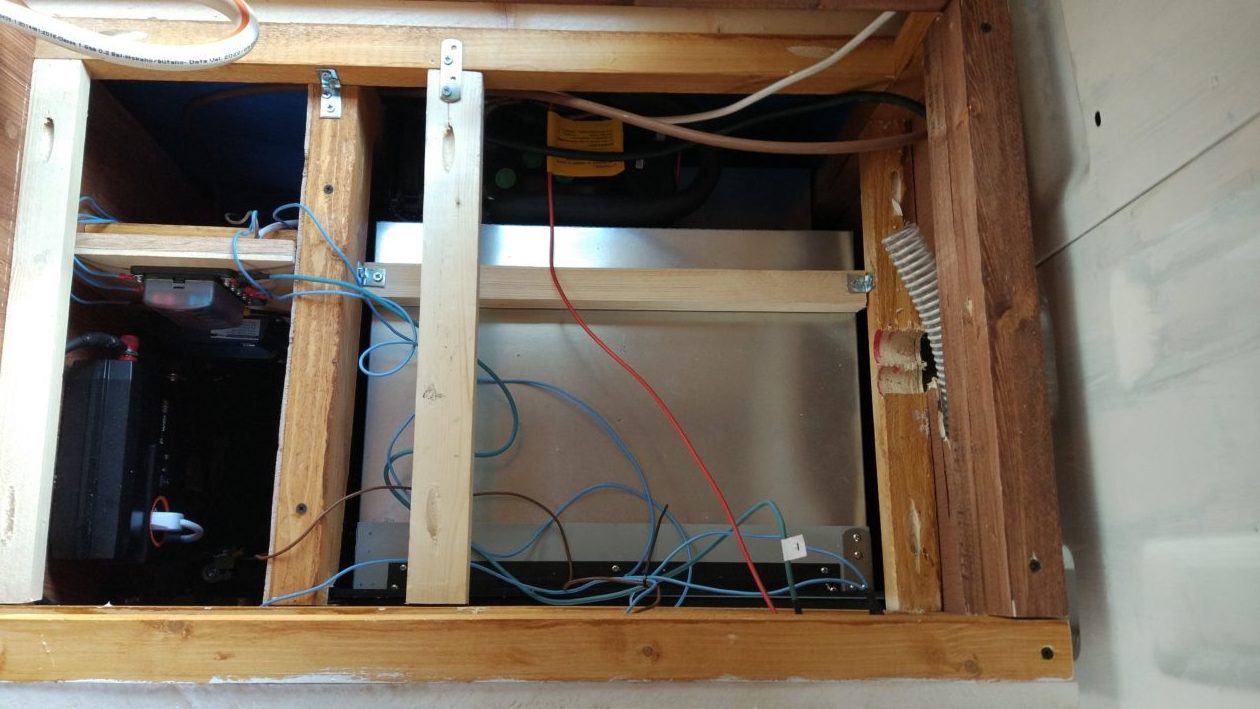 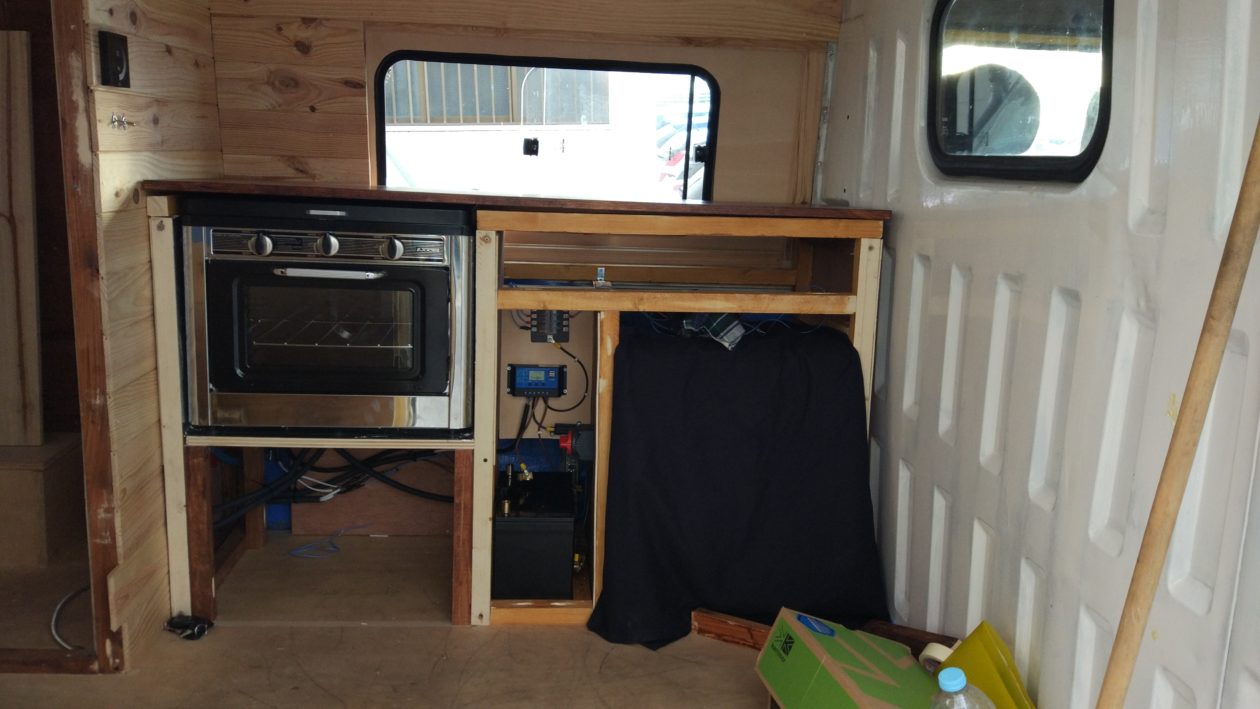 With this done, we advanced to the bench. To cut it we made the marking of the stove and the dishwasher. the first part is the most important because it will continue to serve as a cover and should be correct, while the second only needs a hole with the diameter of the dishwasher.

Although it was not totally correct because we did not have the tools indicated, it is something that is not noticed and ended up being well. 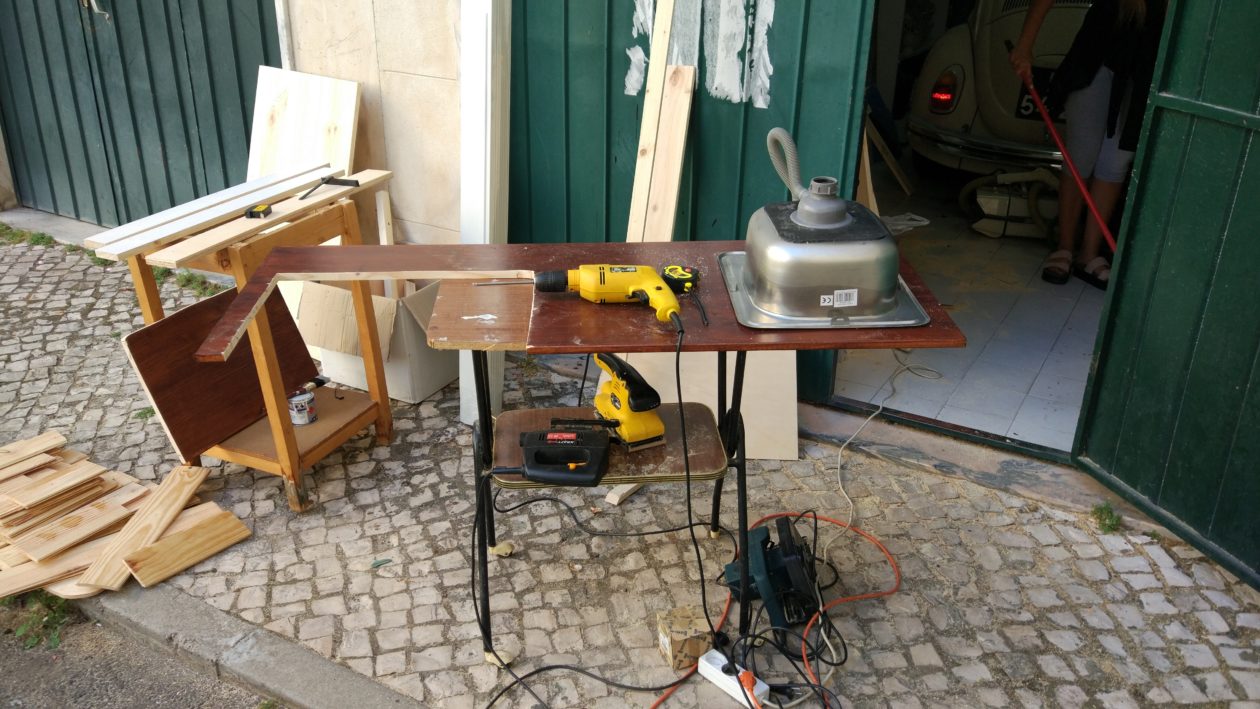 Then with hinges we put the lid on the stove and with a scrap of wood we made a lateral protection so things did not fall to the back. We just fixed the lid at the end of it all.

After we had the structure of the kitchen made, we applied as a ” frame ” on pine, so as to give a beautiful finish. In the end we painted in white. The drawer we made in a simple way, without gutters and looked pretty good.

With this part made, we made the visible part of the drawer and the doors of the cabinets. We used simple hinges and handles. In the end it got a rustic look, which was exactly what we wanted. 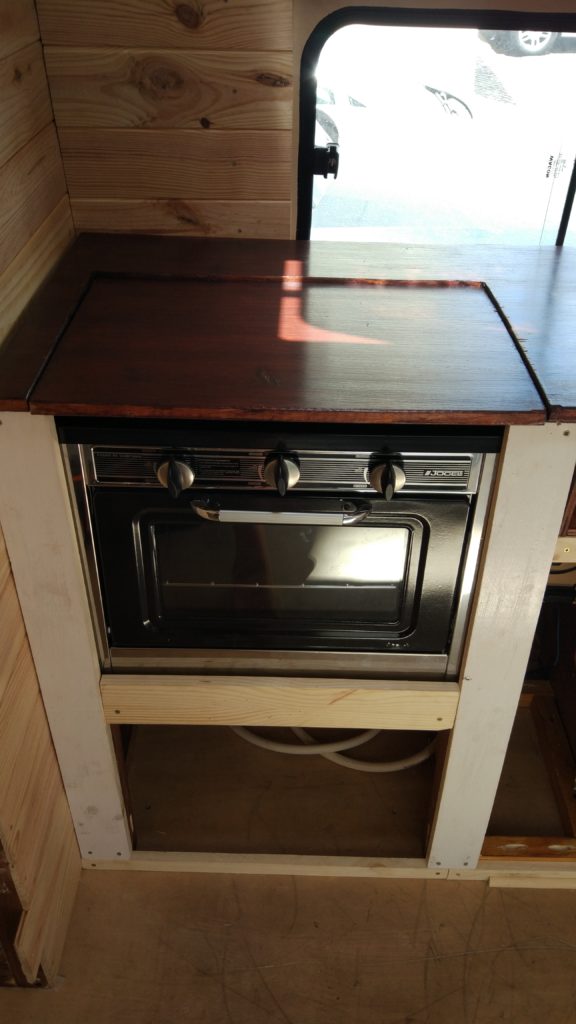 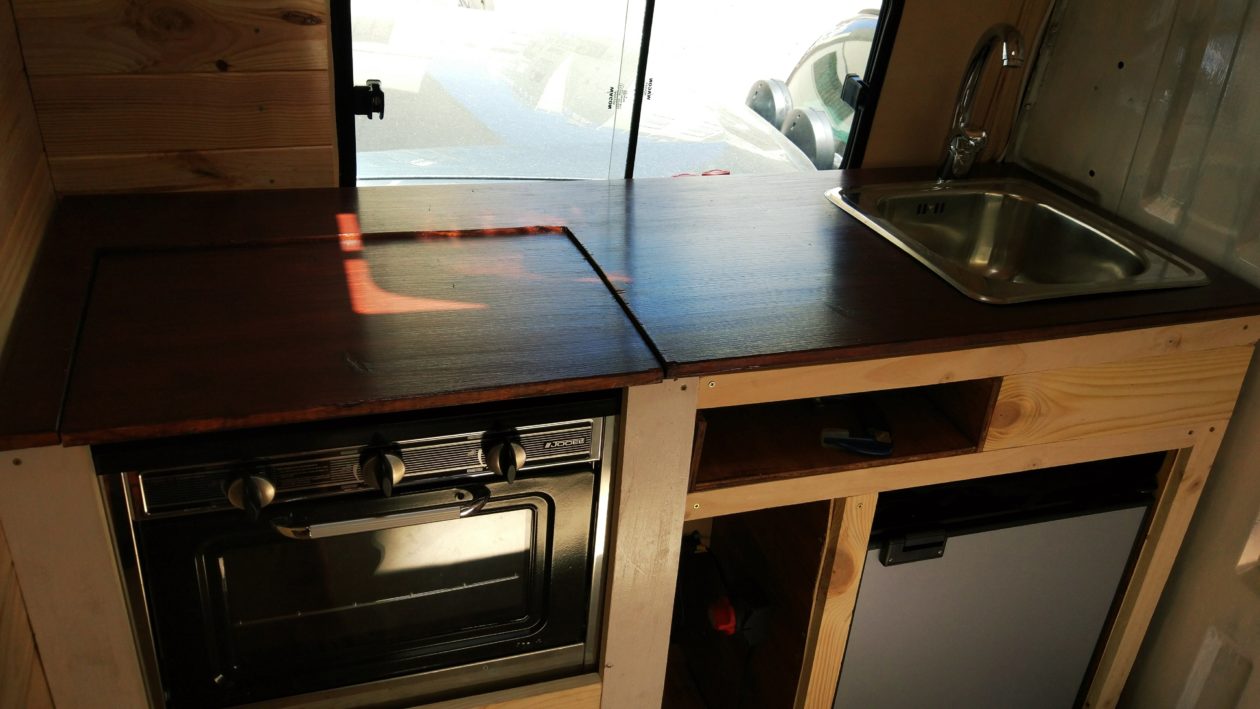 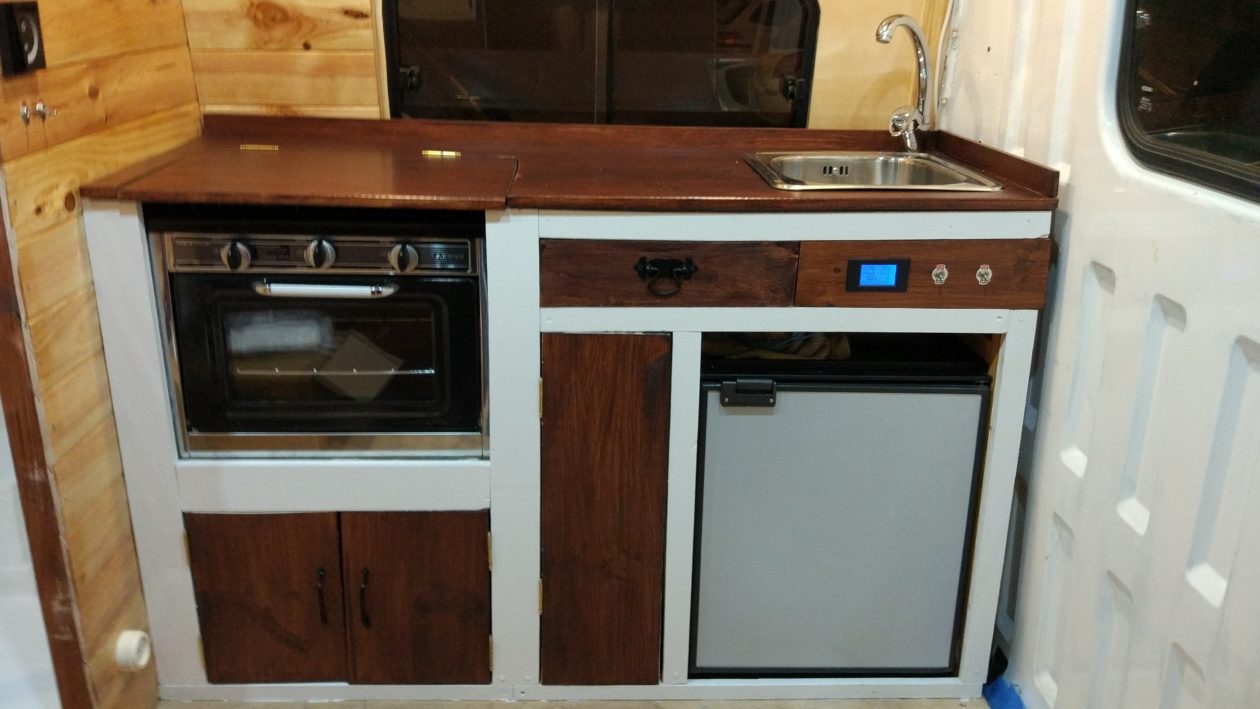 Finally we made the area underneath the dishwasher, which we fixed with silicone . We put the refrigerator switch, the water pump and a voltmeter.

The table was fairly easy to make and ended up getting better than it seemed at the beginning. We decided to put the table next to the window on the side of the door, immediately after the window to stay as high as possible.

We bought a sliding tube rail with 100 centimeters, then with a bit of 60×50 pine we made the table. 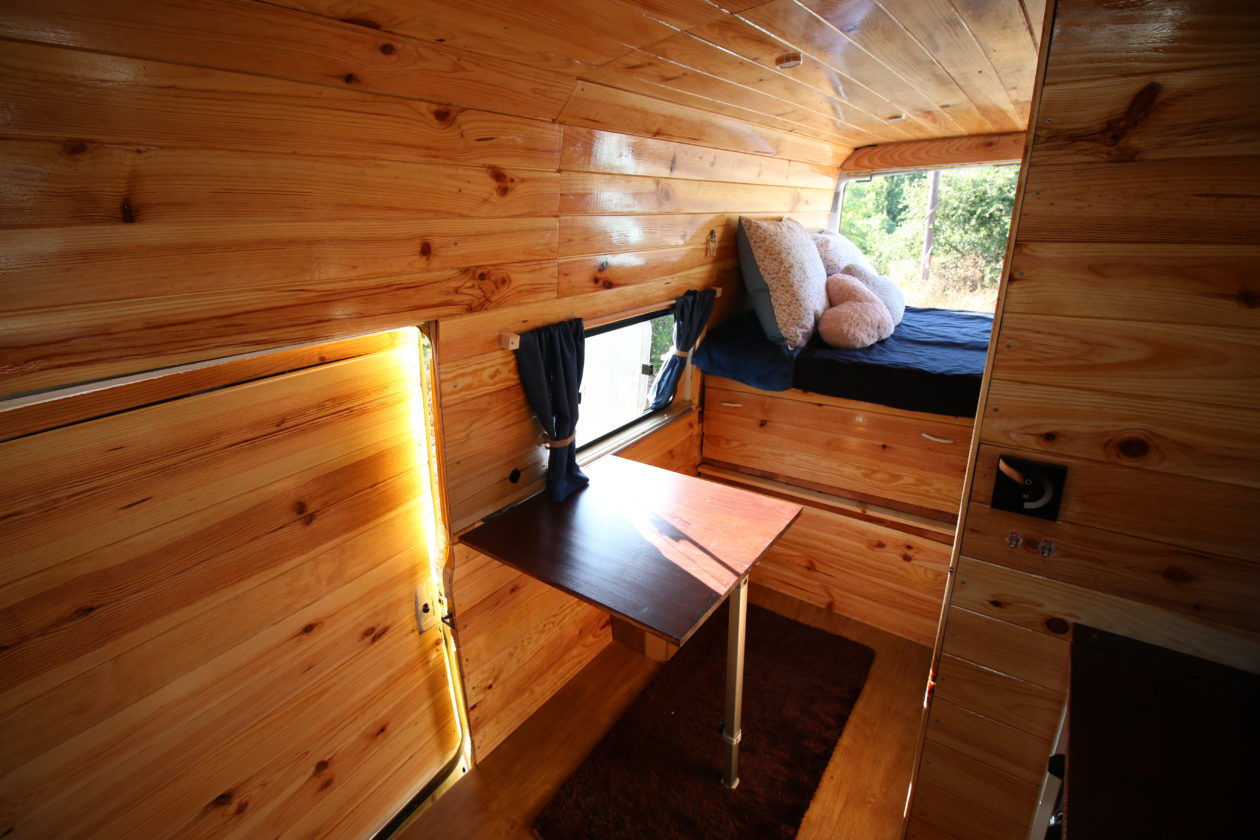 The table fits perfectly for both and slides easily. In the beginning we had thought that we were going to put down the table, but the truth is that with the space that we have at the front of the kitchen it is rare that we need to remove the table.

The foot we bought an extensible and always stays put. 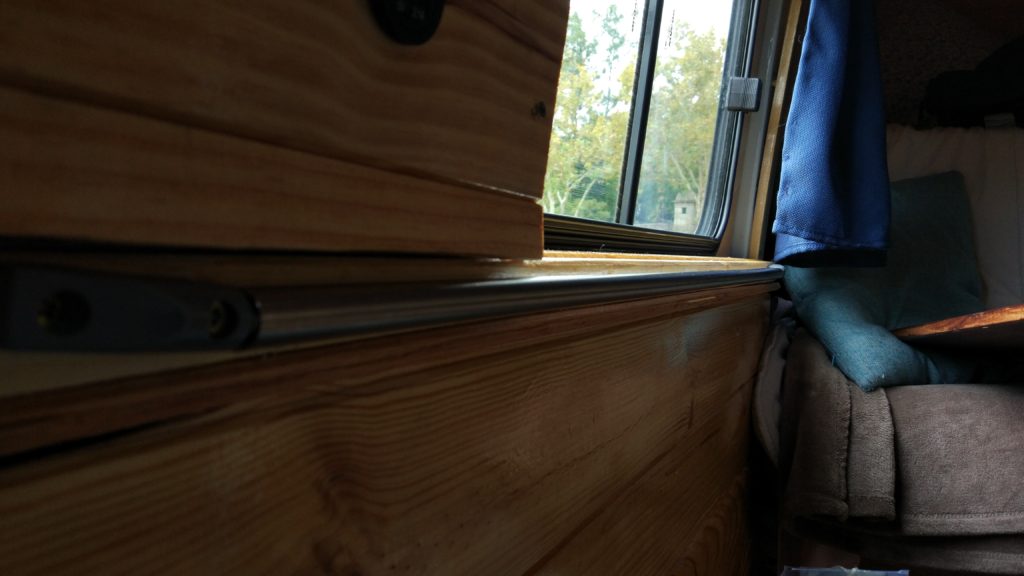 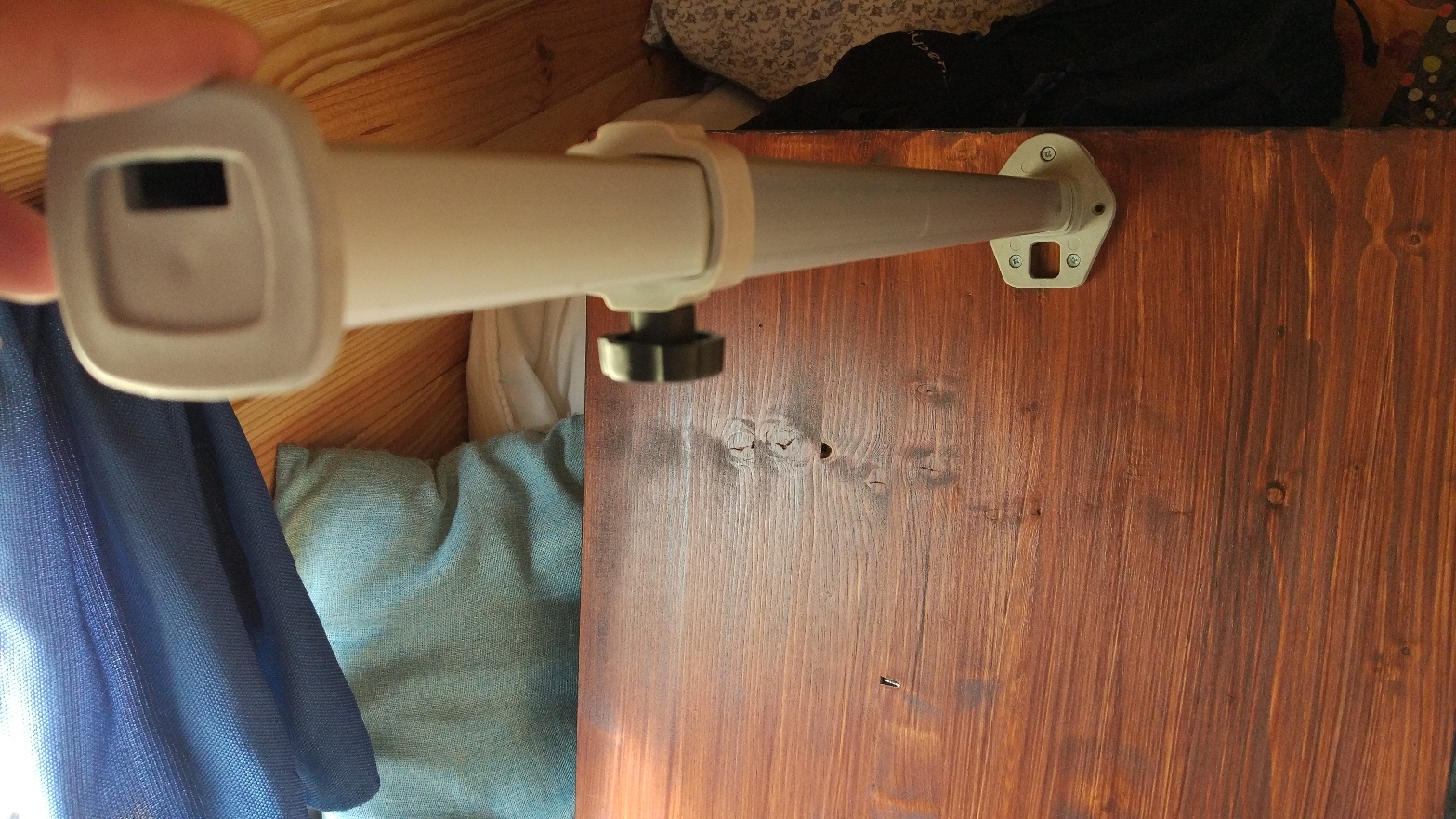 This article will be updated as soon as we make the furniture over the kitchen and over the front seats. We are counting on doing more for the end of the year as soon as we have time.

Other articles about this conversion