The 10 best views in Lisbon 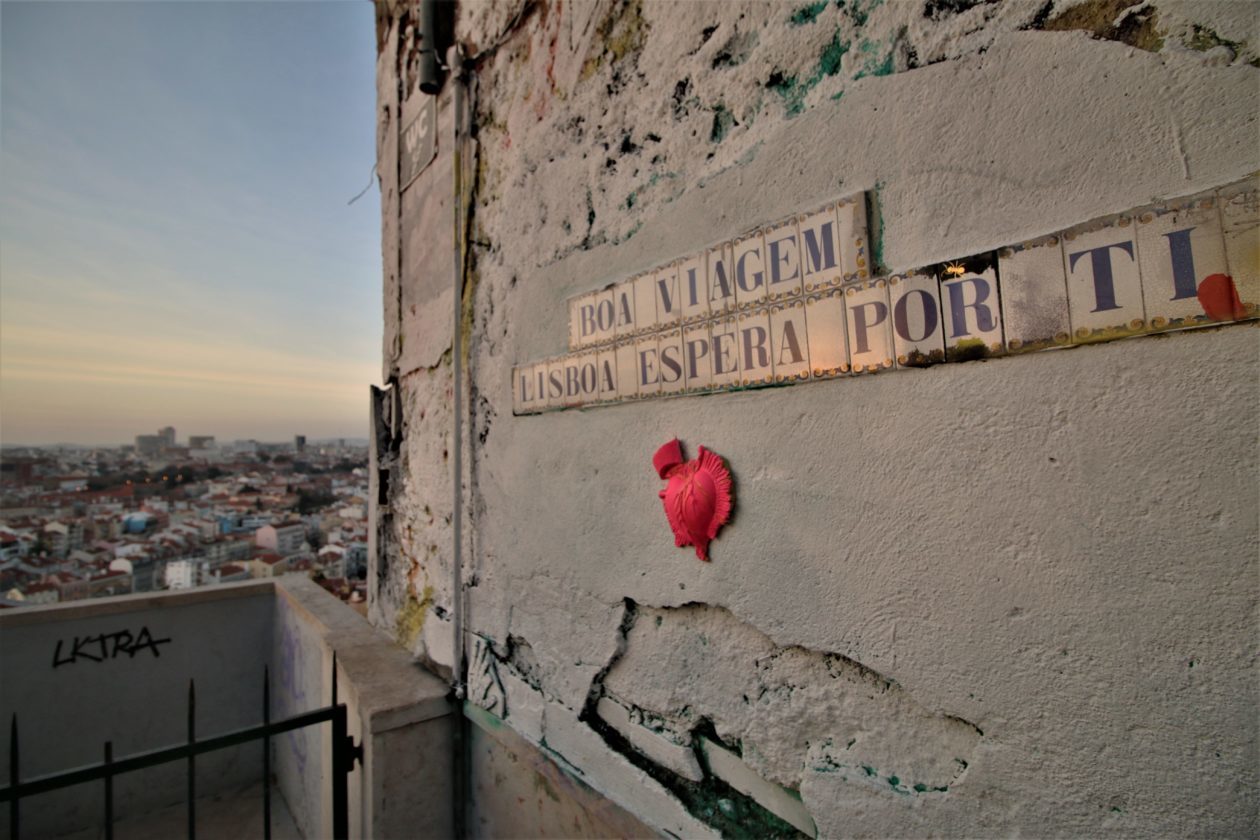 A viewpoint belvedere is a high place, from where you can see a privileged panoramic view of some landscape. It can be artificial (from an observation tower or building) or it can be natural, for example from the mountains.

We love to do this type of tour and have already visited most of the viewpoints of Lisbon. Decided then to write this article, with those on top10. We only choose free sights – in the center of Lisbon, in Monsanto and in Almada.

The panoramic of Monsanto is located in Alto da Serafina. It was opened in 1968 as one of the capital’s most luxurious restaurants. For years and years he had been abandoned, with everything shattered and a real chaos. For some time the most curious went through a hole in a hammock to see the space and the view of the viewpoint with their own eyes. They have recently cleaned the building and it is possible to visit for free.

It has three floors interspersed with staircases, filled with graffiti and urban art, it is possible to observe a work of the artist Vhils, who paid homage to the Brazilian activist Mariella Franco. On the top floor there is the panoramic viewpoint where you can see one of the most beautiful views of the city of Lisbon and the Monsanto Forest Park.

How to get there: As it is located in the heart of Monsanto, it is only possible to get there by car (have a car park) or leave at the Campolide station and take a taxi / Uber 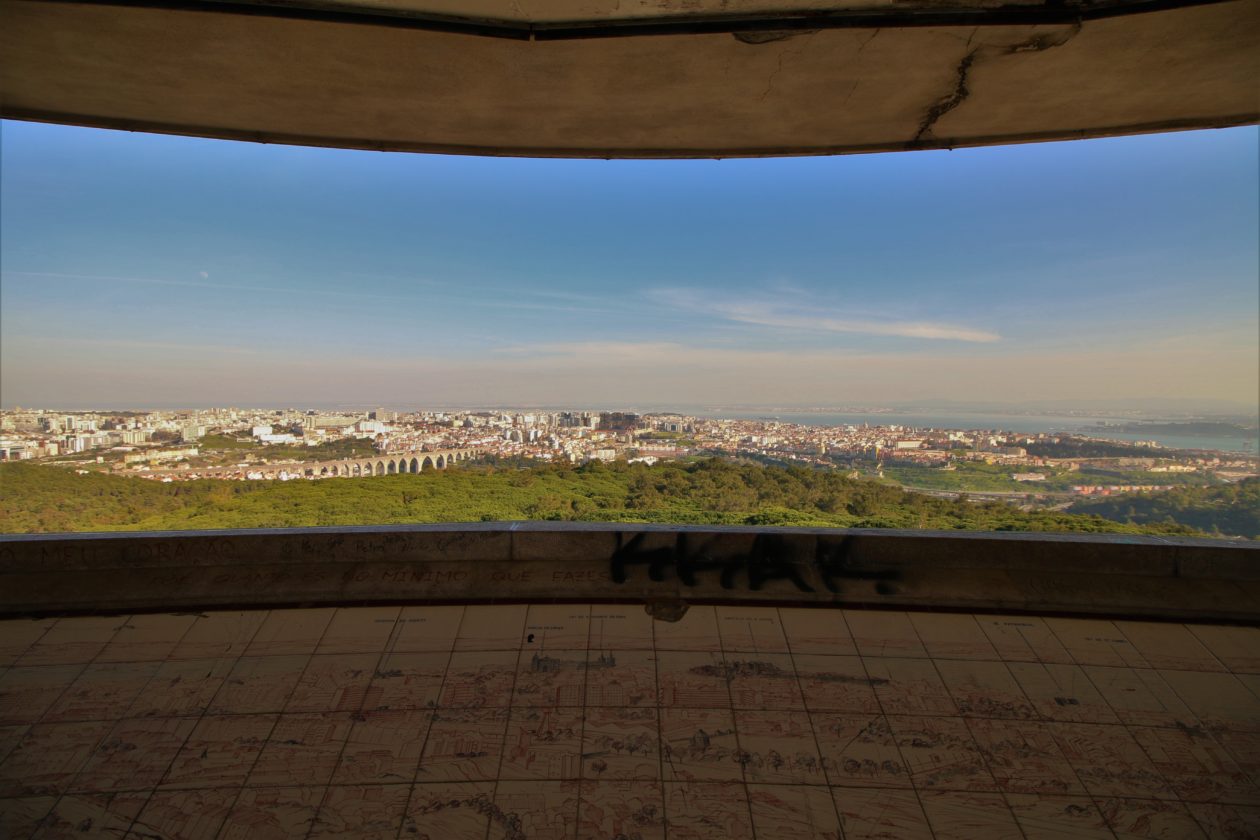 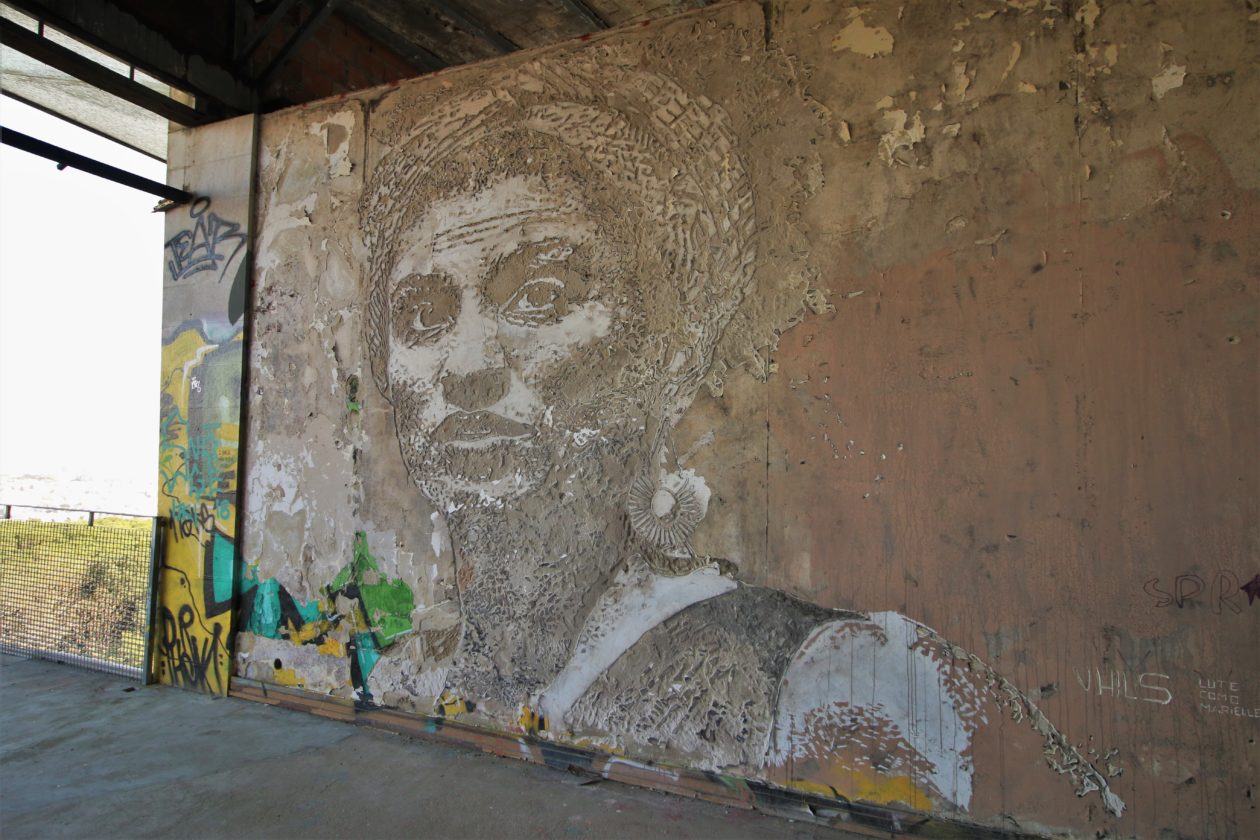 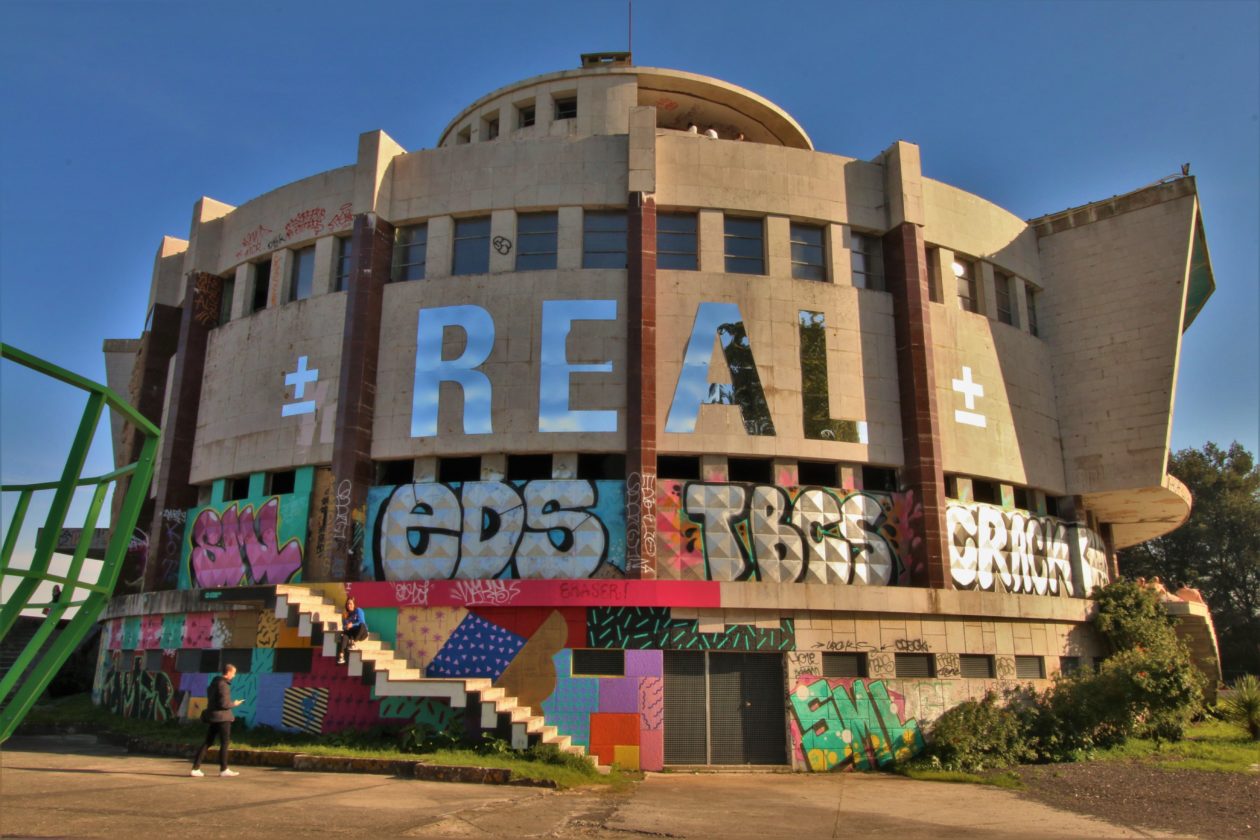 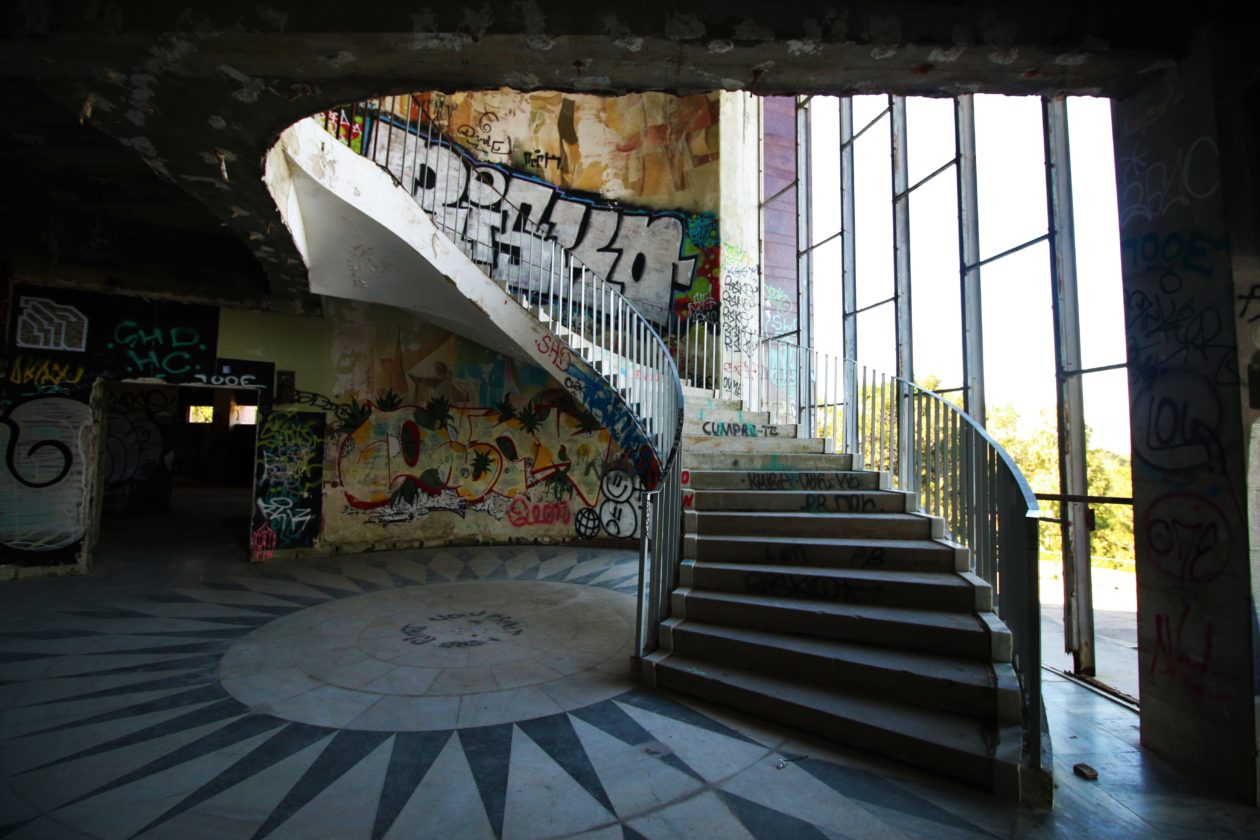 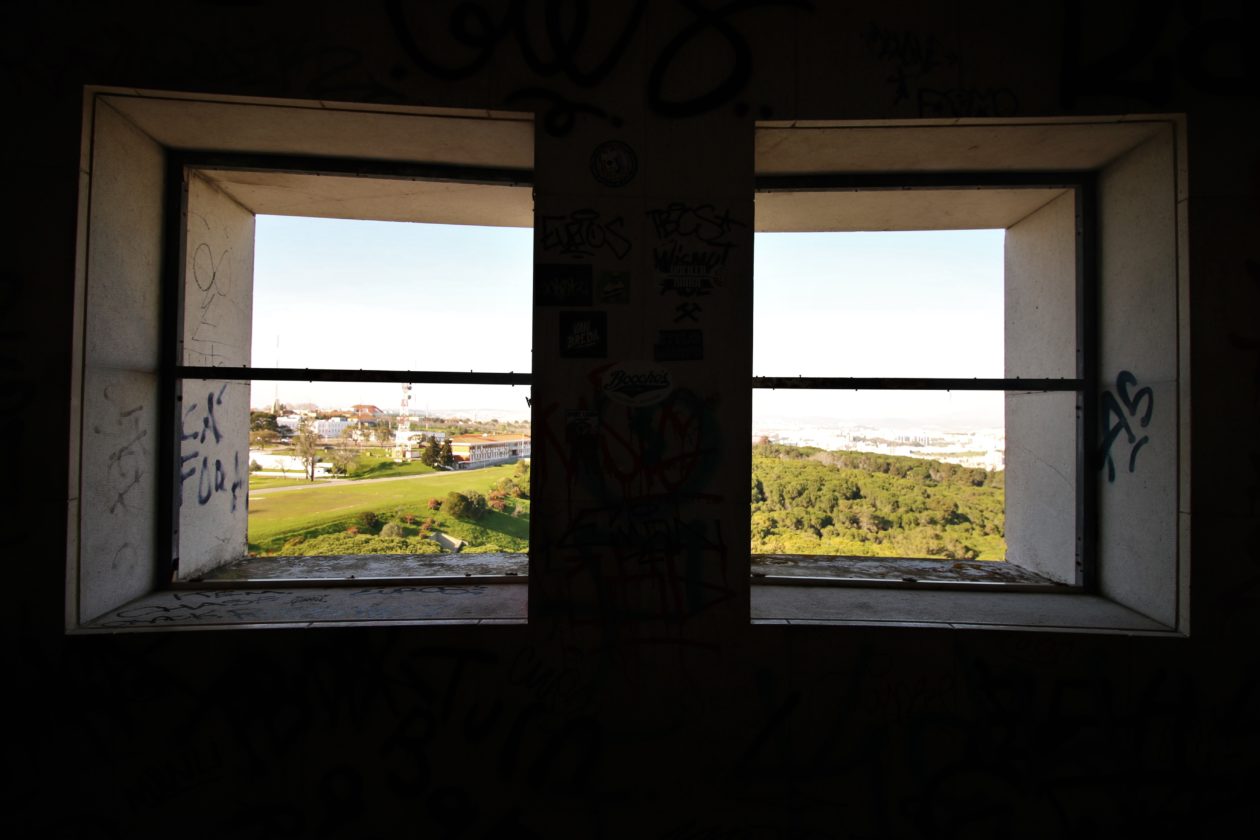 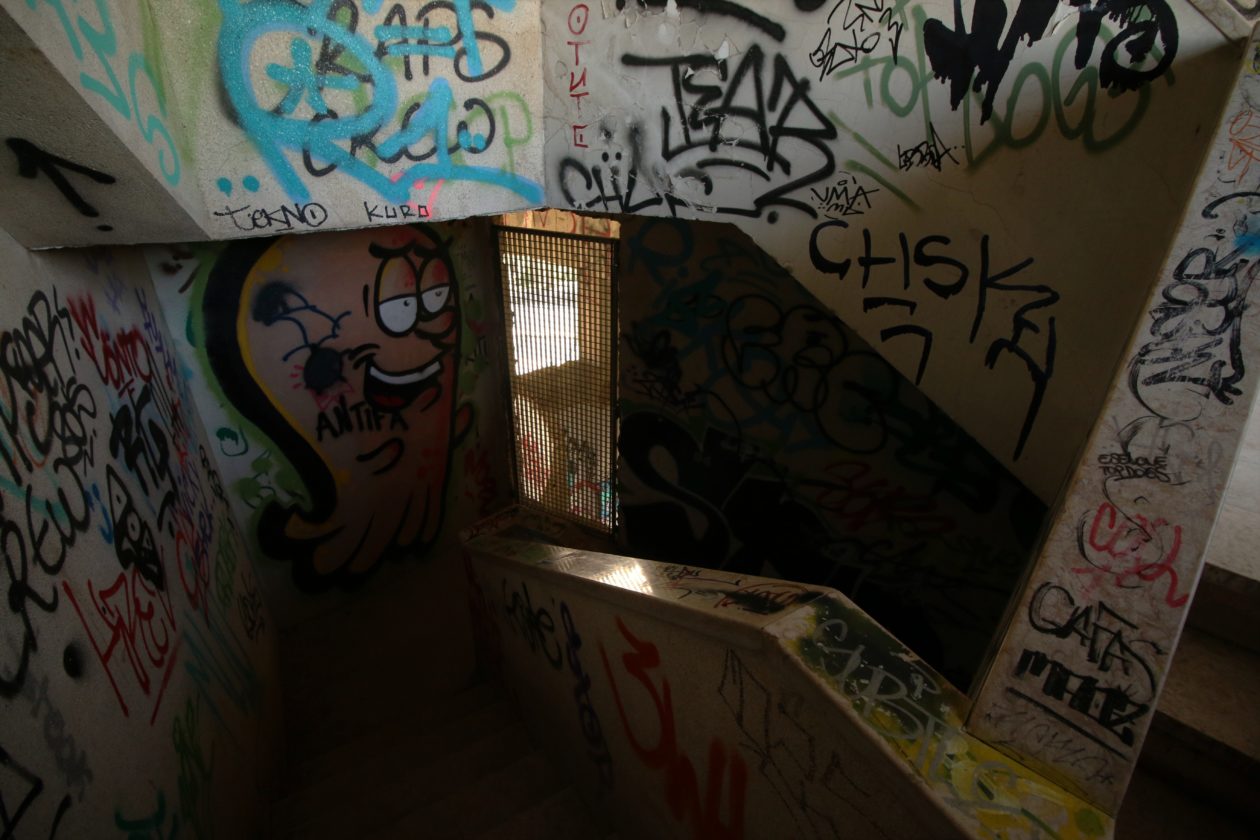 This is the perfect viewpoint to feel in communion with Nature. The nearest road is through the parking lot of the Penedo Mill. The viewpoint is half hidden next to the amphitheater of the same name, which in itself already has a wonderful view, to the river and the 25 de Abril bridge. Just look for a rail and follow it that will give to the top of the viewpoint where you have benches to sit and contemplate the view. 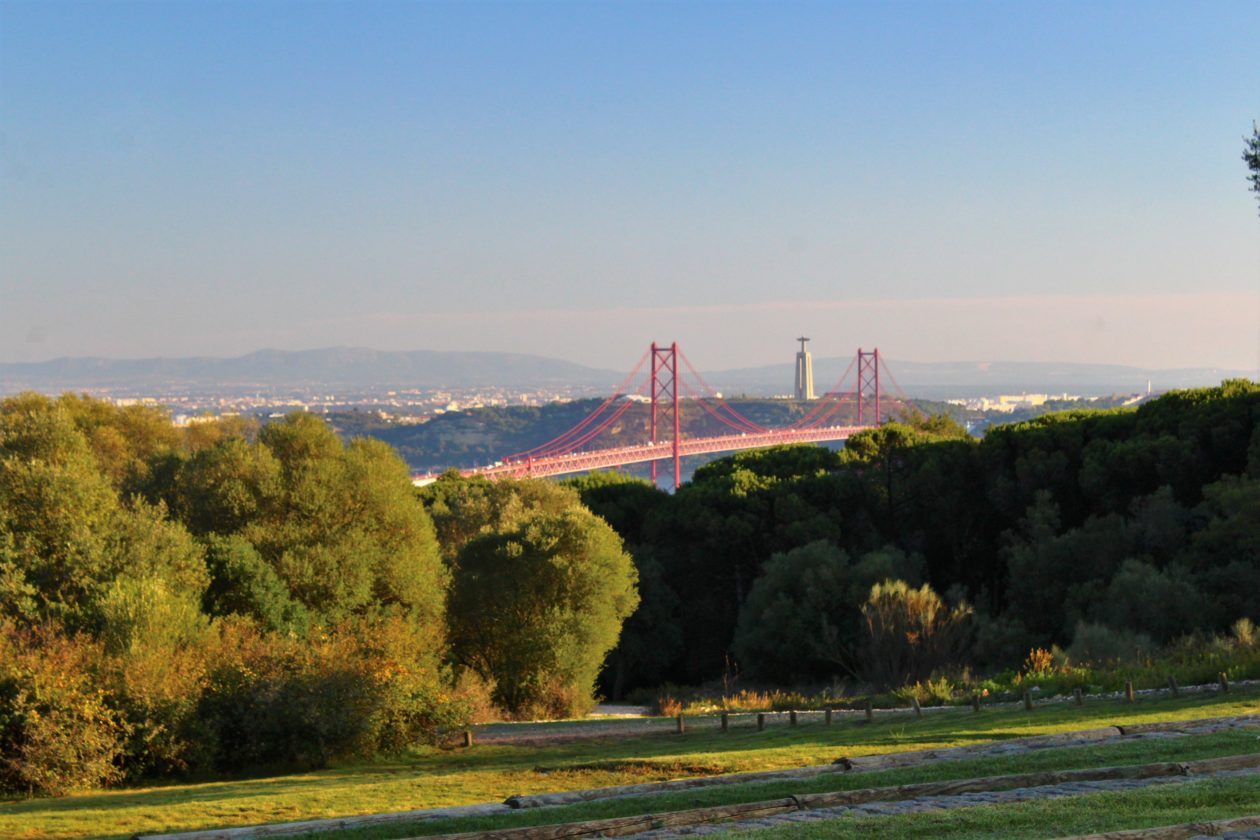 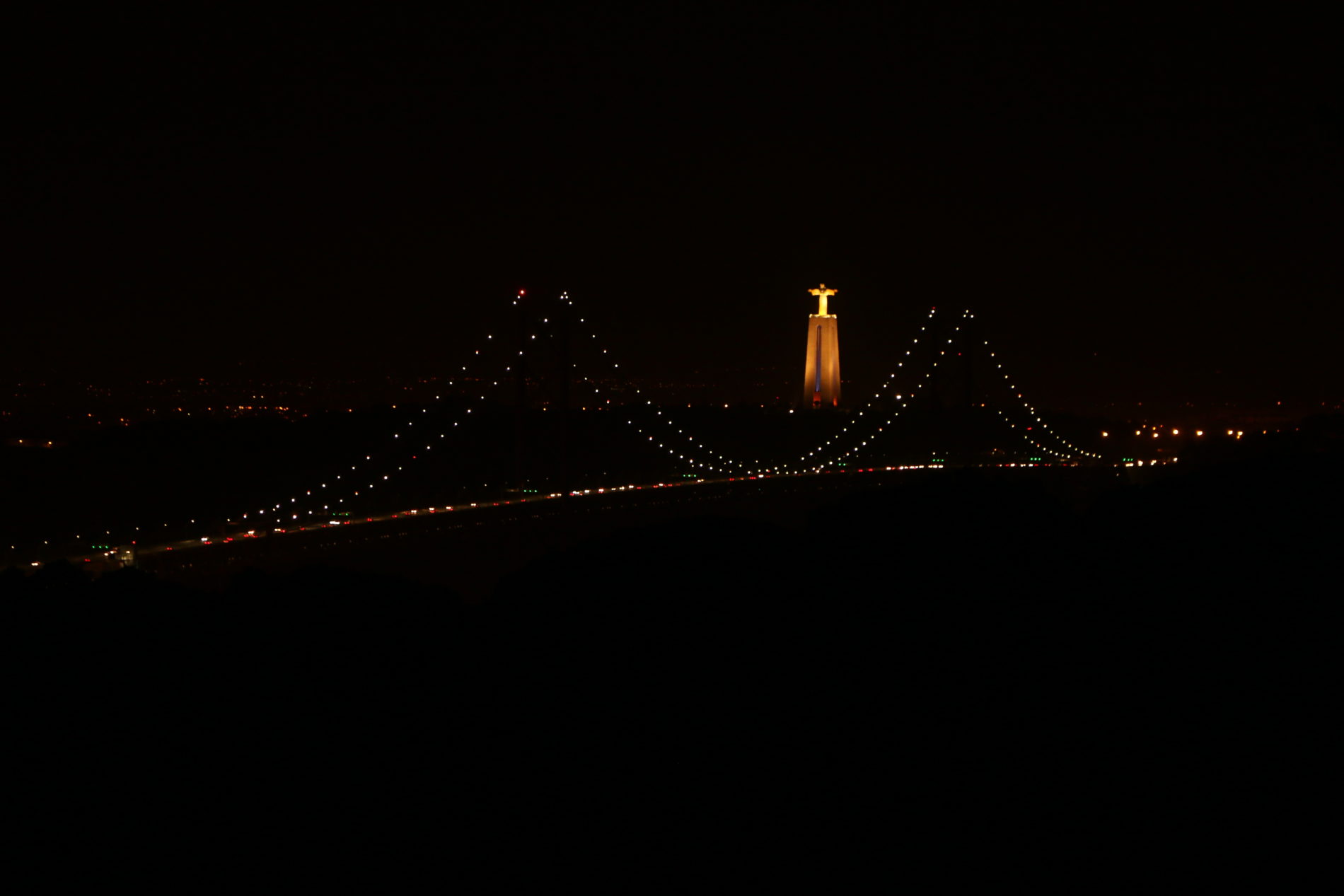 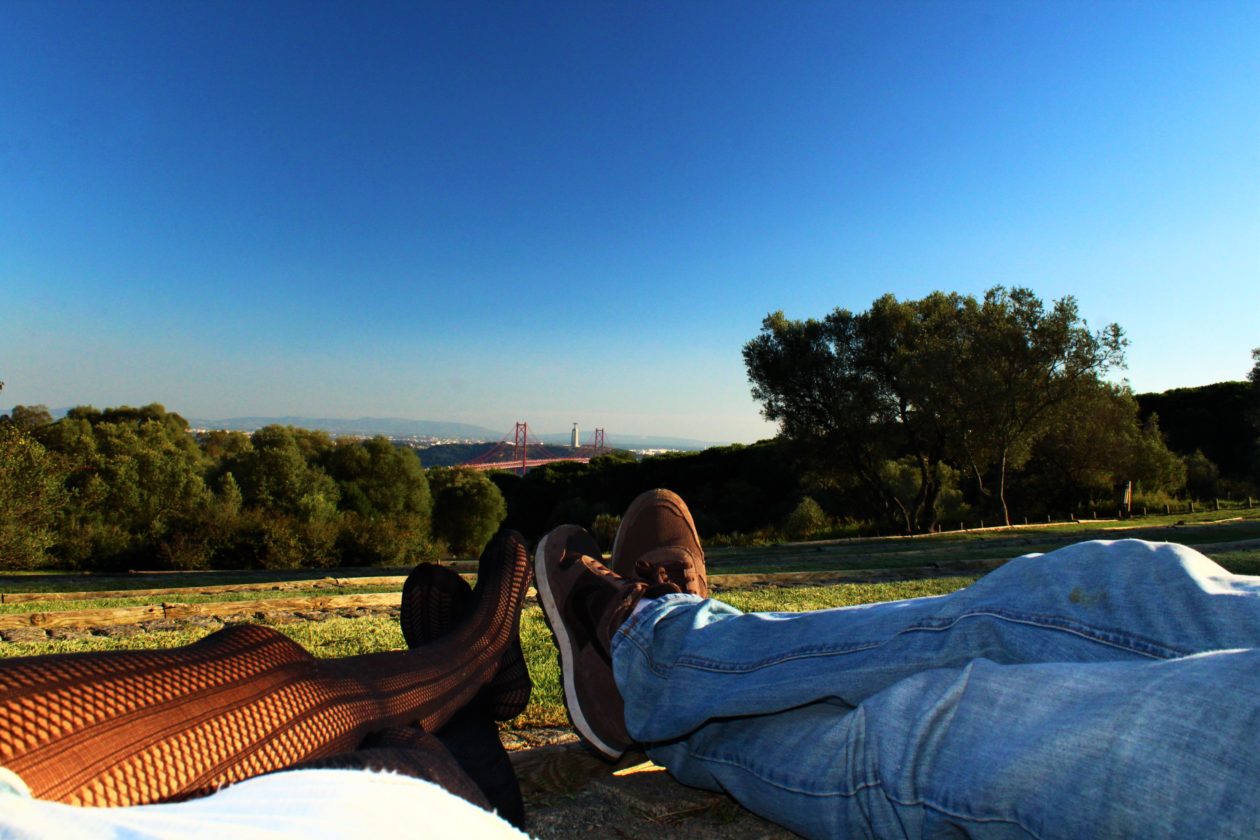 Once it was a dump .. but it is now a clean flat location with a perfect perspective for the 25th of April bridge. It is on the side of the road, it is only possible to enter on foot and it is a small terrain of land, that jumps in the sight in the middle of the vegetation.

It is a privileged place and where many photographers try to take the idyllic photograph, to the south bank of the Tagus. 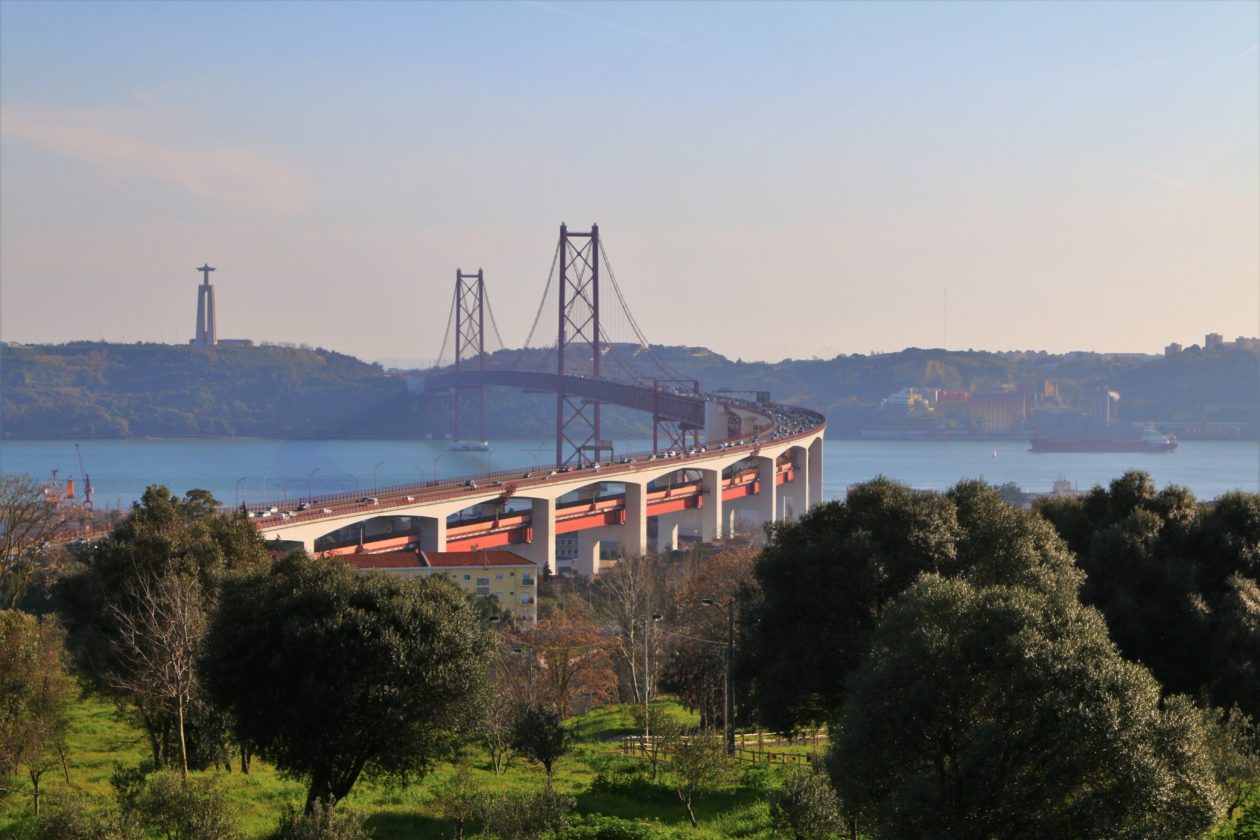 The Mirador and Sanctuary of Cristo Rei is perhaps the most emblematic viewpoint of Portugal. It is located in Almada and has a wonderful view over the city of Lisbon, where Christ is facing wide open. The monument was inaugurated in 1959 and is religiously dedicated to the Sacred Heart of Jesus, which makes many believers want to visit.

The space surrounding the monument is free, has a very special aura and in itself is already worth the ride. If you do not have vertigo, you can climb the elevator about 100 meters to contemplate the 360º view. The cost is € 5 per person.

How to arrive: Take bus 101 in Cacilhas, which will take you to the entrance of the Sanctuary 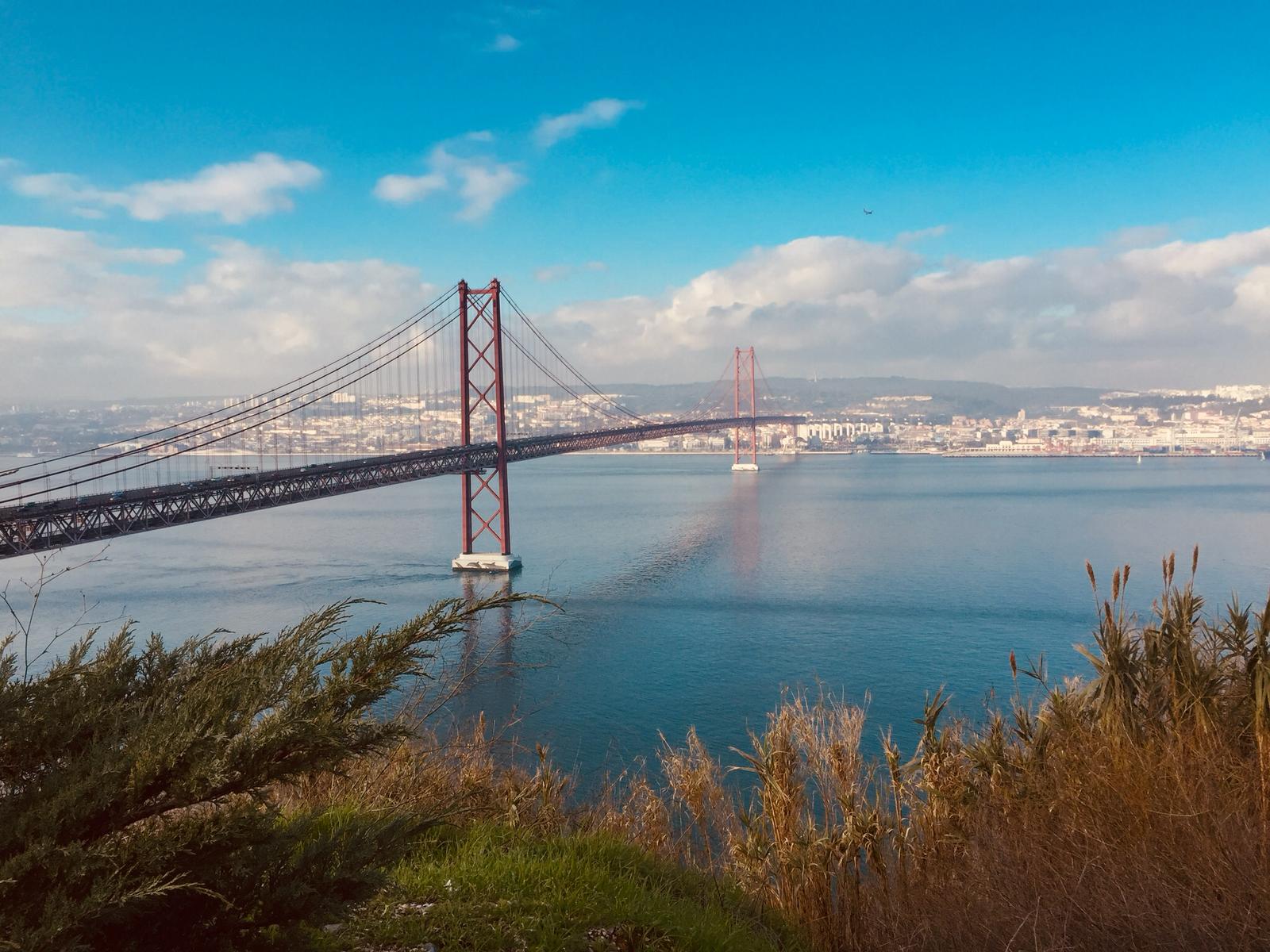 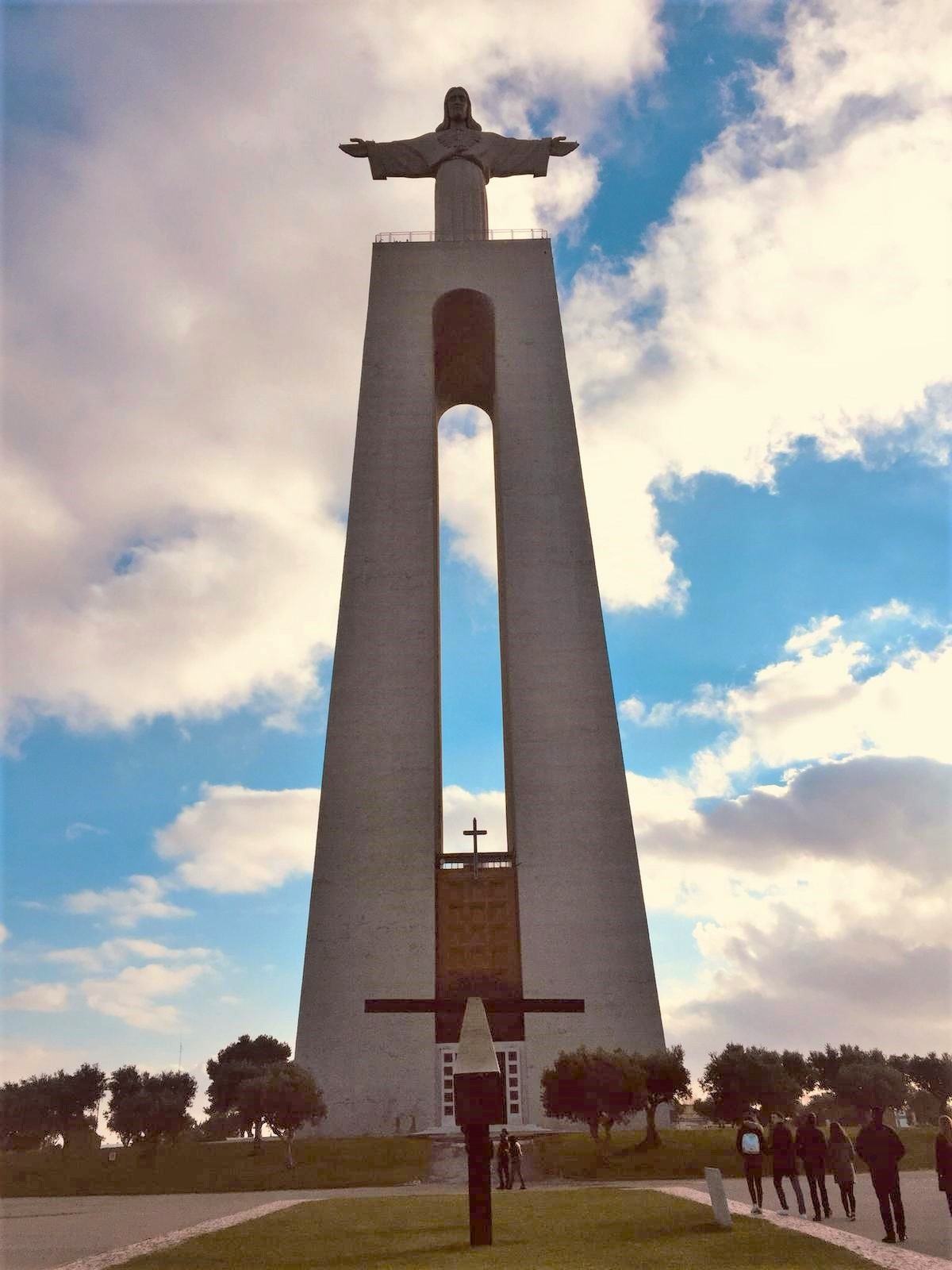 The viewpont of Boca do Vento is known for having a panoramic elevator, where you can go up and down for free. On the river bank, there is a beautiful garden, called “Jardim do Rio” with grass where you can make a picnic and benches to sit a bit and enjoy the view. You can also take a walk along the riverside area in the direction of Cacilhas, by the wall, which has some cafes right on the river.

How to get there: Get out on the boat in Cacilhas and take a 10min walk 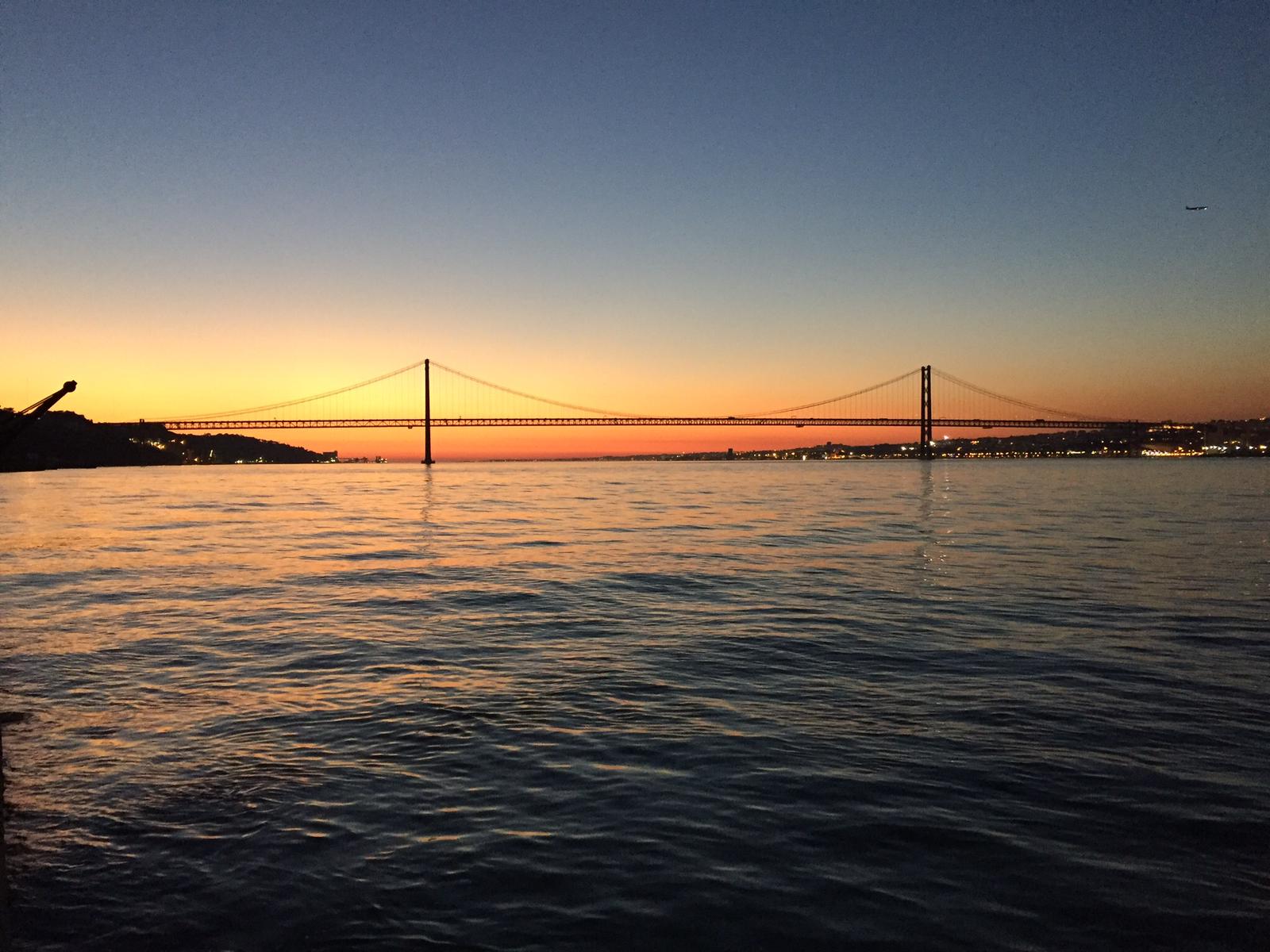 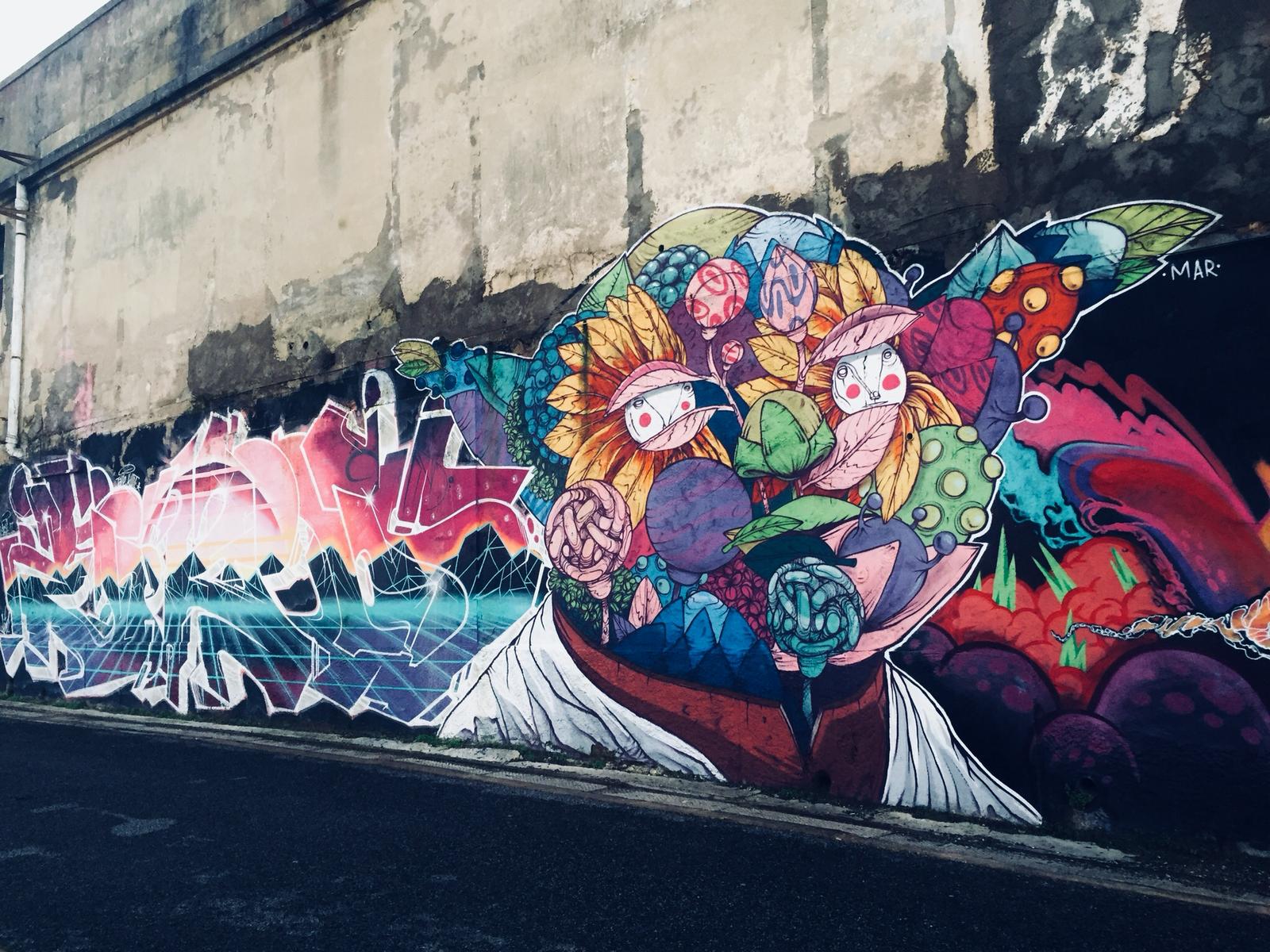 The viewpoiny is best known as ” Miradouro da Graça ”, but recently its name was changed to Sophia de Mello Breyner Anderson – one of the most important poetesses of the 20th century and the first woman to win the literary prize Camões.

In Largo da Graça, next to the church, there is an esplanade in the belvedere, where you can sit a bit and enjoy the panoramic landscape. This view is very beautiful, but still can be surpassed, by the belvedere of Nossa Senhora do Monte, which is a few meters away, roughly 5 minutes on foot.

How to get there: Take tram 28 or take a walk through Alfama district 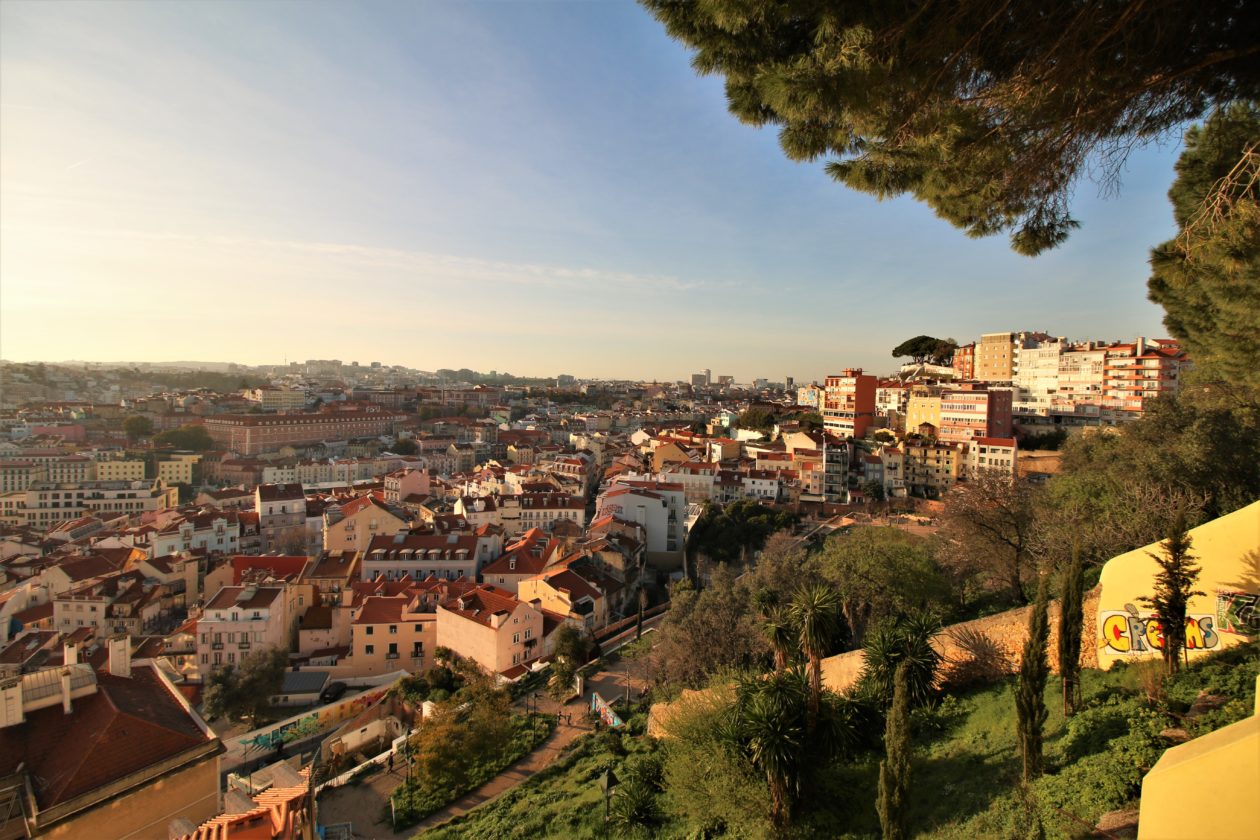 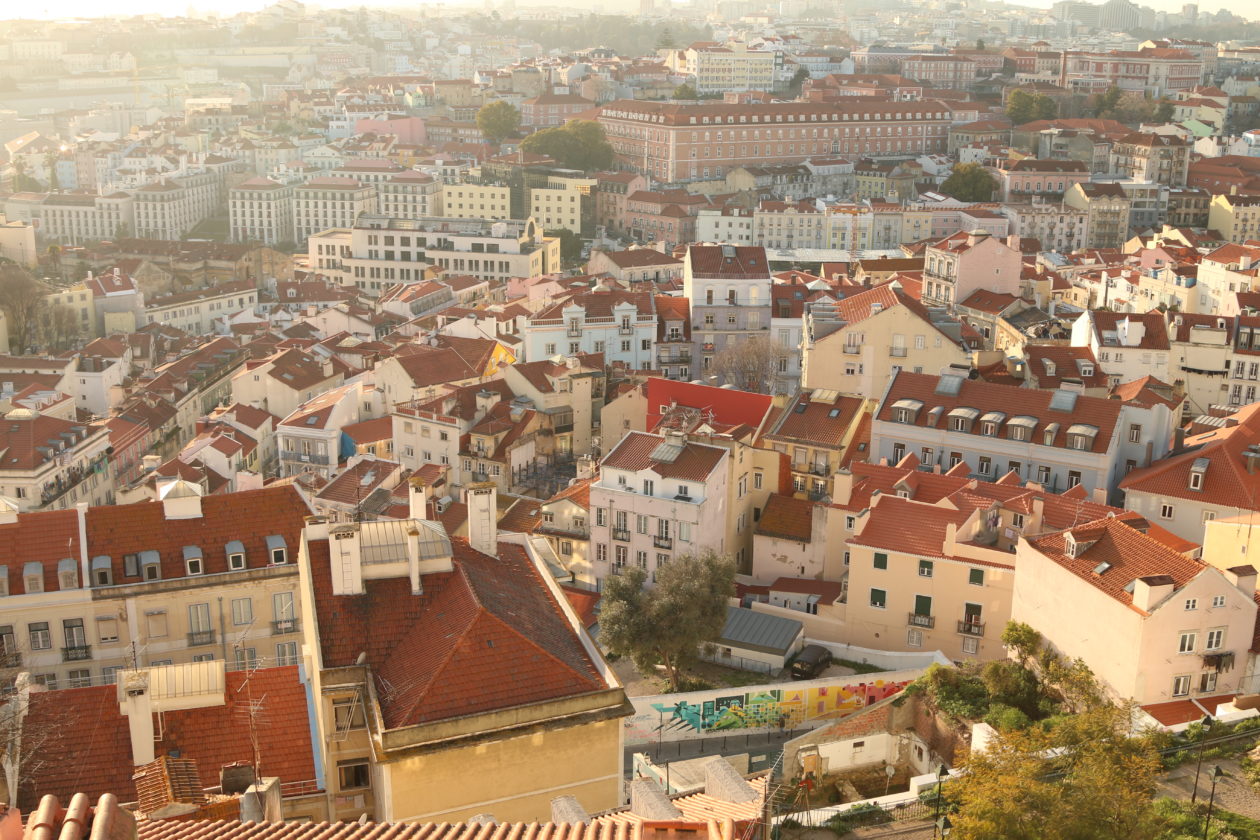 The center of Lisbon has many viewpoint, but .. we can say that Nossa Senhora do Monte is our favorite of them all. We discovered together, many years ago, when we were teenagers.

At first there were more locals or people who knew the viewpoint, however with the increase of tourism in the capital, is very frequented by tourists arriving by tuk-tuk. The hour of sunset is the most desired and the viewpoint is filled with people. Nobody is indifferent to the magnitude of this beautiful sight, over the city. It is possible to see the Castle of São Jorge, the Largo do Martim-Moniz, the Tagus, the 25 de Abril bridge and the other bank, the Restauradores Square, the downtown Pombaline and even the Amoreiras towers.

The viewpoint is on the top of a hill, called Monte de São Gens. Here you can also visit the Chapel of Nossa Senhora do Monte, which has a statue of Our Lady.

On the side of the church, on a wall you can read “Boa Viagem, Lisboa espera por ti”, a message of hope that brings us back to the time of the discoveries, when the discoverers set off in search of new lands.

How to get there: Take tram 28 or take a walk through Alfama district 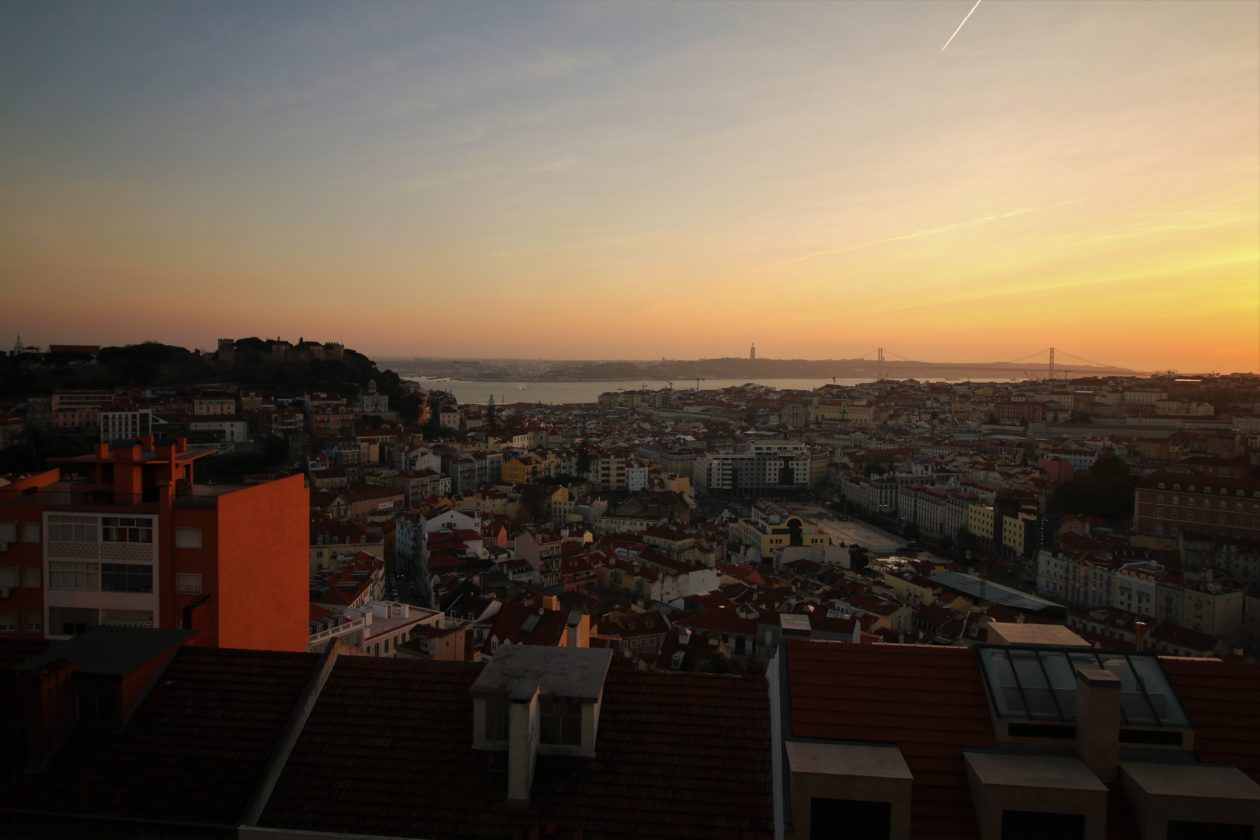 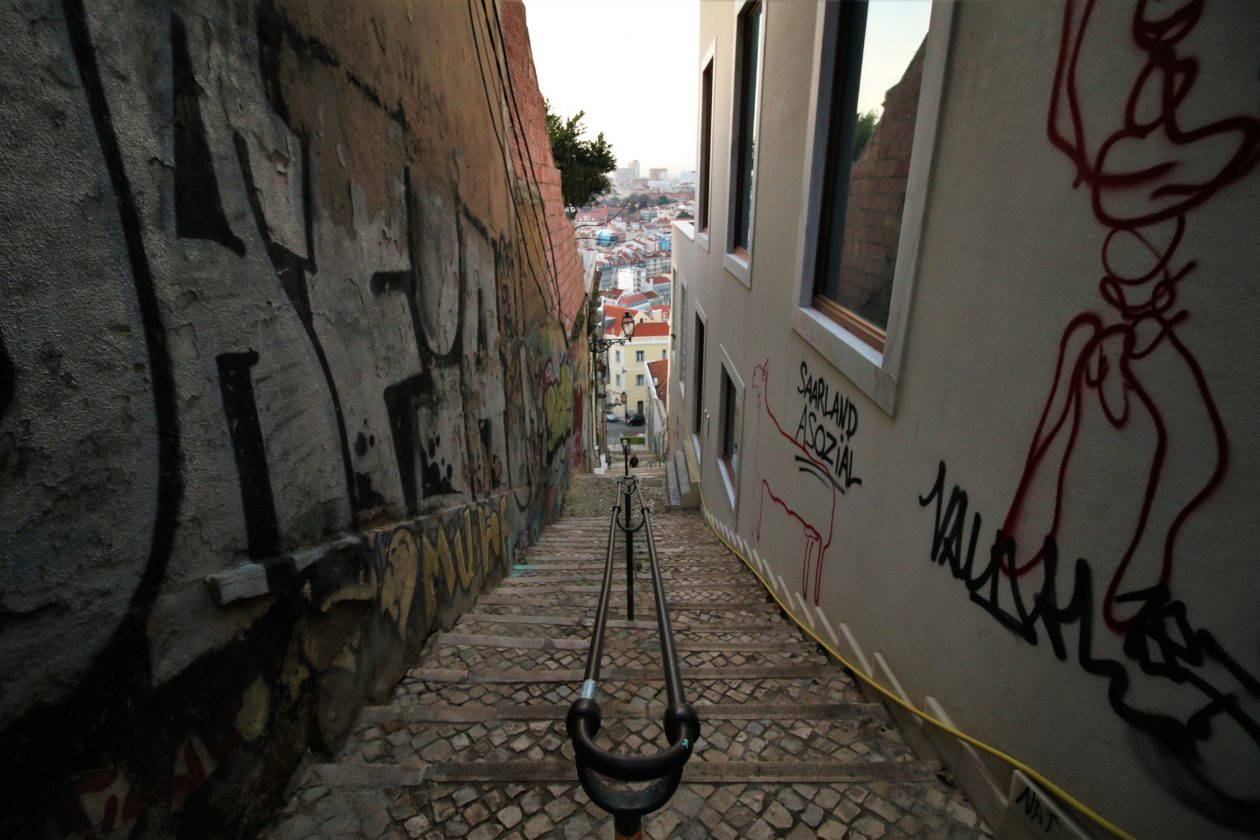 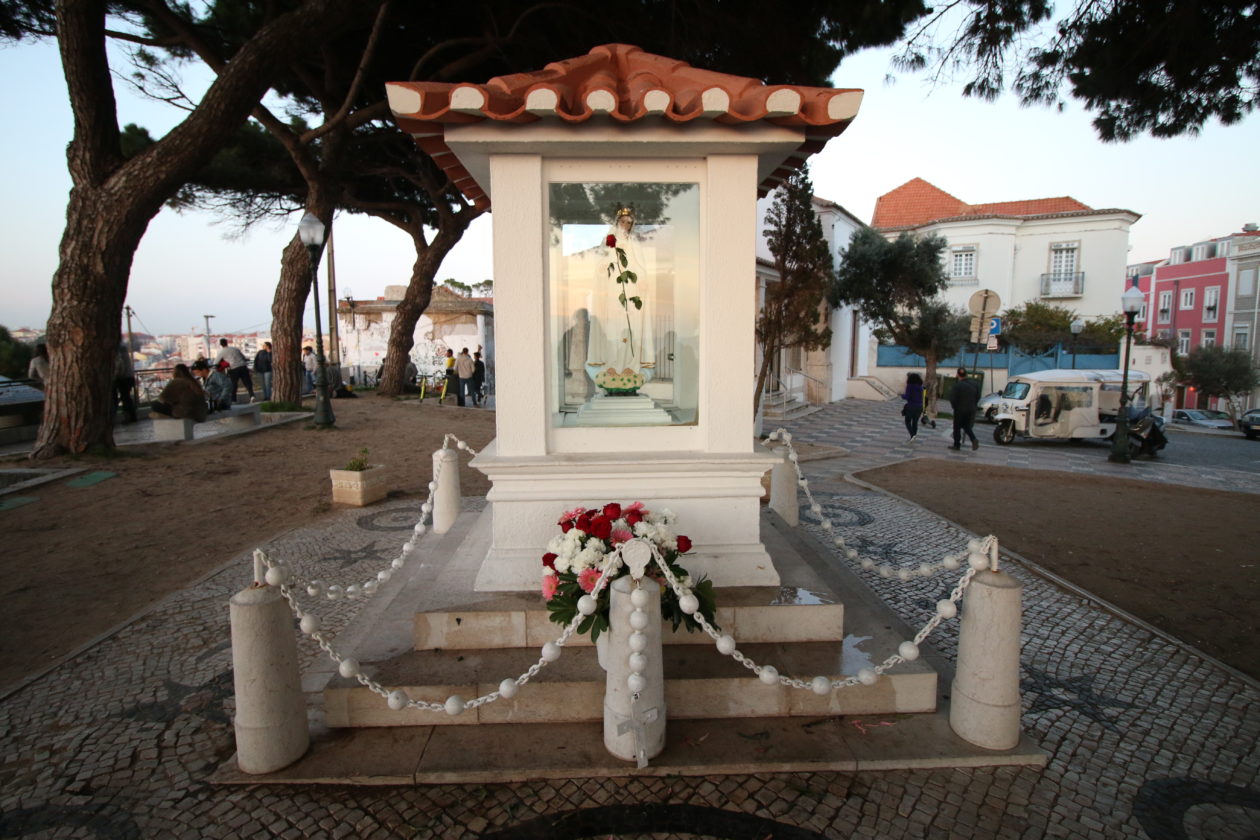 This viewpoint is located in the historic quarter of Alfama and has the balcony that everyone would like to have. A view that looks like a picture postcard with the streets of Lisbon, the Monastery of São Vicente de Fora, the National Pantheon, the Church of Santo Estevão, the pier of Santa Apolónia ..

In the center, facing the Museum of Decorative Arts, is the statue of Saint Vincent, the Patron Saint of Lisbon. In Portas do Sol, they often make markets with handcrafted products.

How to get there: Short walk from Alfama 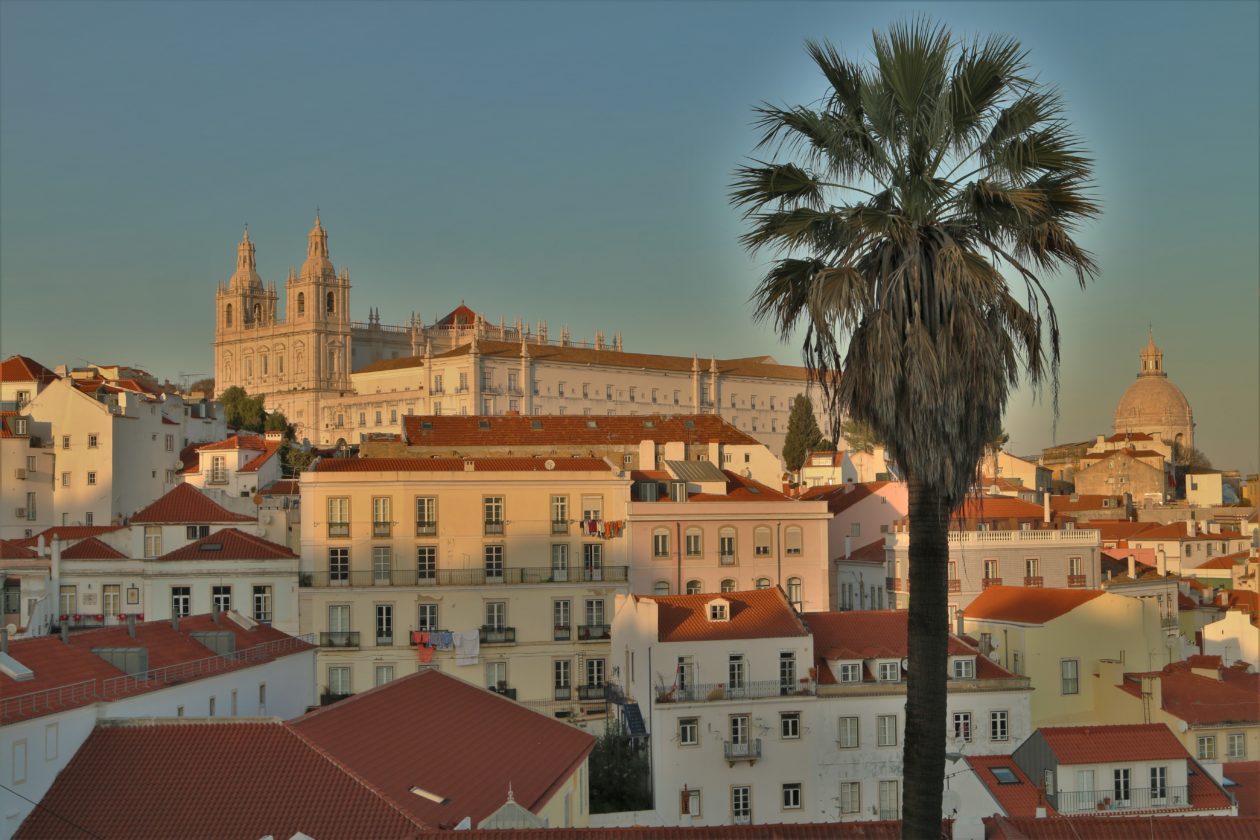 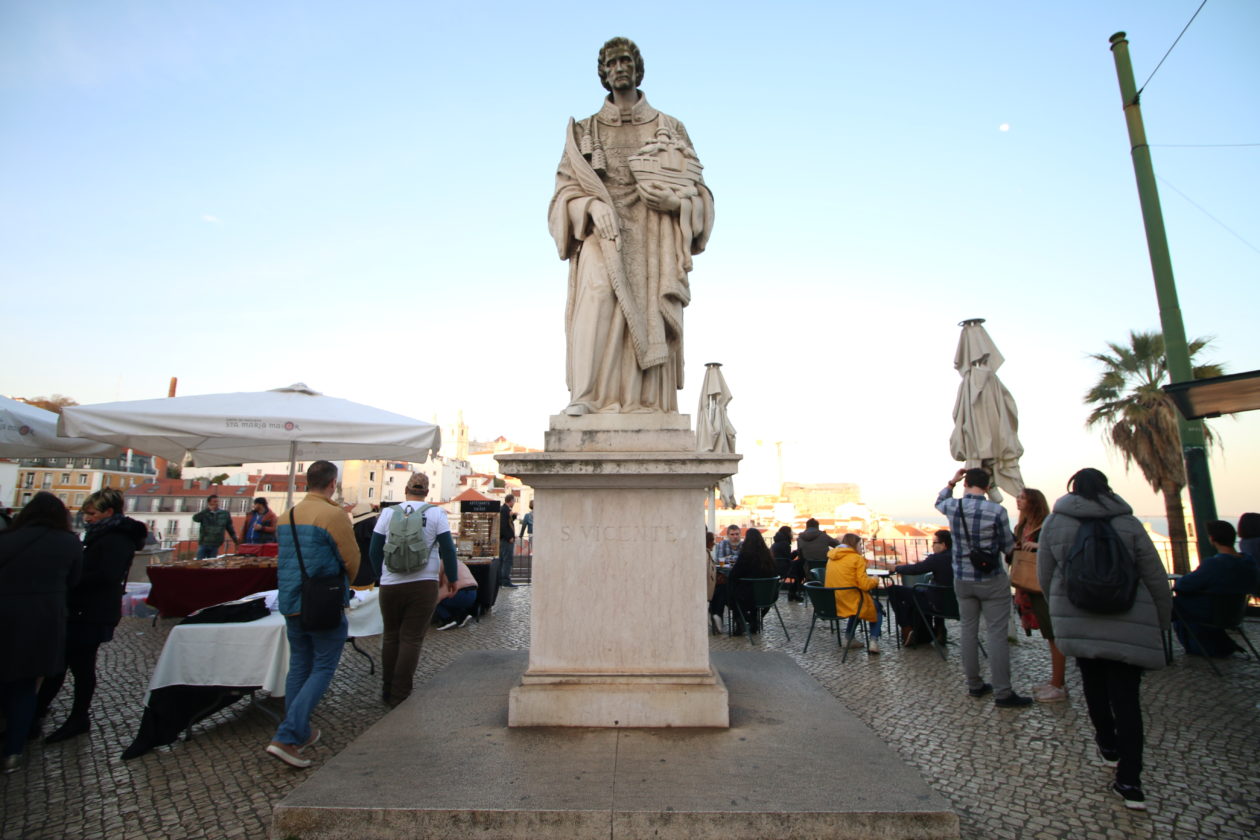 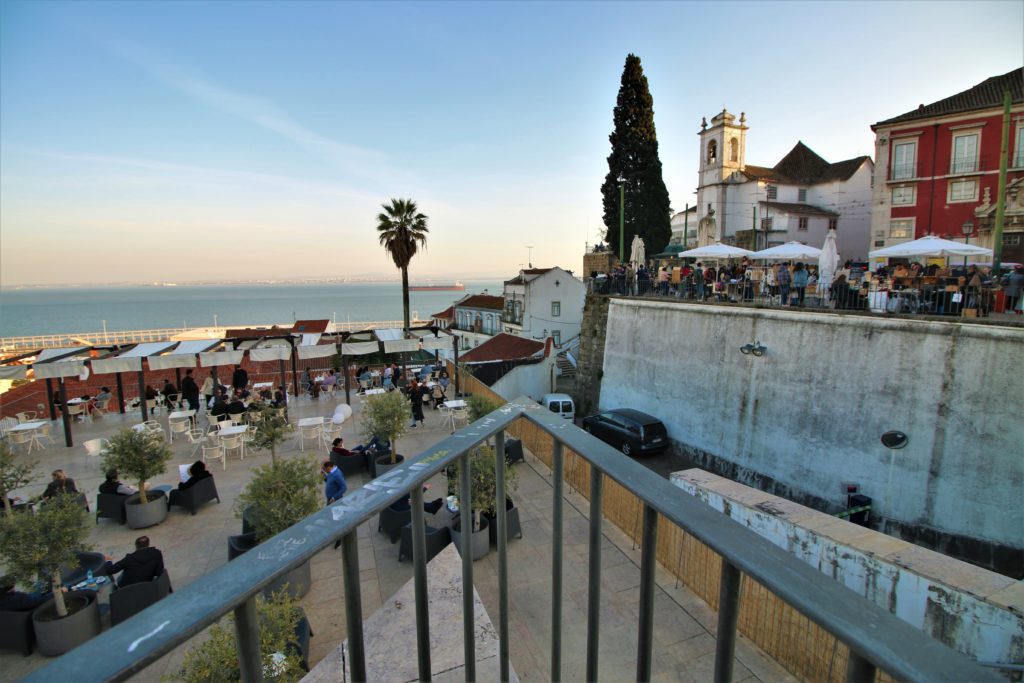 The viewpoint of Santa Luzia, is located just below the viewpoint of the Doors of the Sun, following the same street. The view is similar, but this viewpoint has a particularity, there are some blue tiles that differentiate it.

The viewpoint has two platforms, which allows us two ways to be different, the upper platform has a pergola with vines that climb and provide a comfortable shade. In the bottom platform has a swimming pool, sort “water mirror”.

Next to the church we can see represented in tiles the Commerce Square before the earthquake of 1755 and also the Christian attack to the Castle of São Jorge.

How to get there: Walking from Alfama 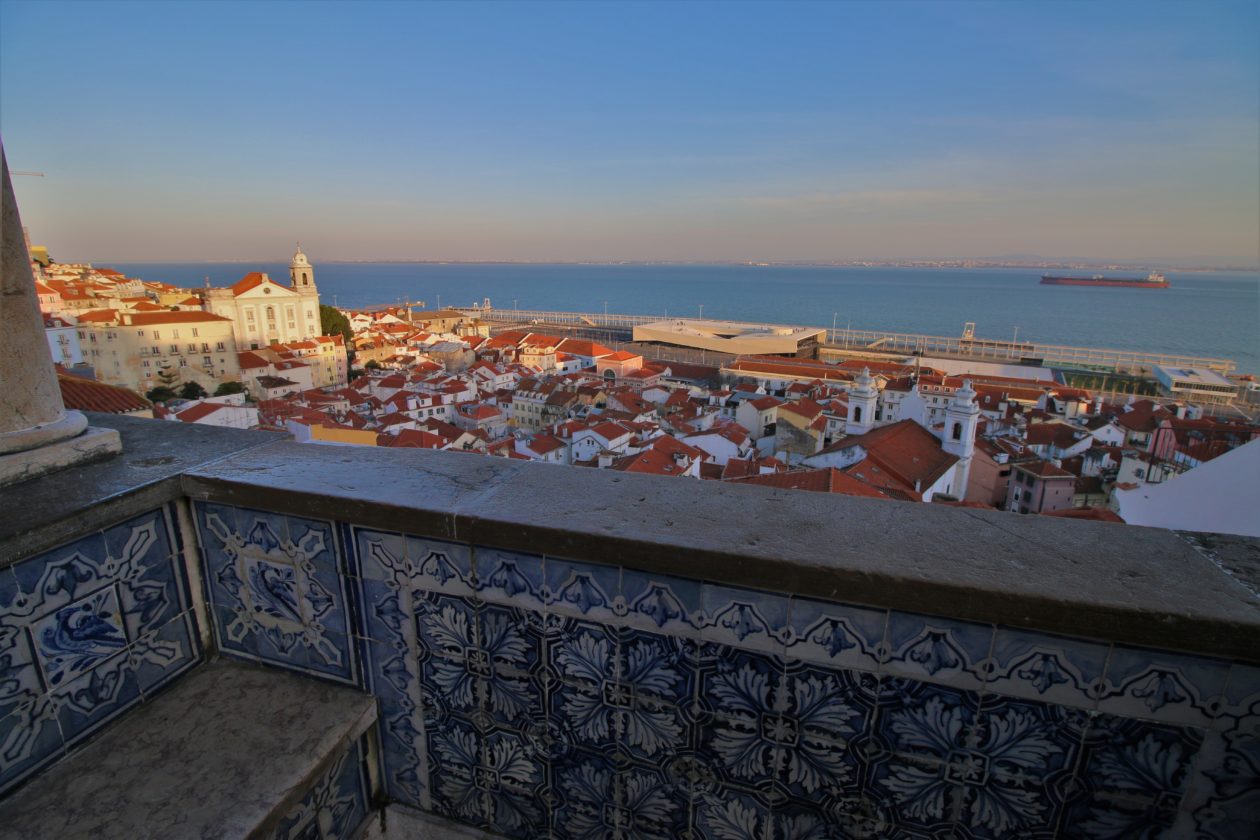 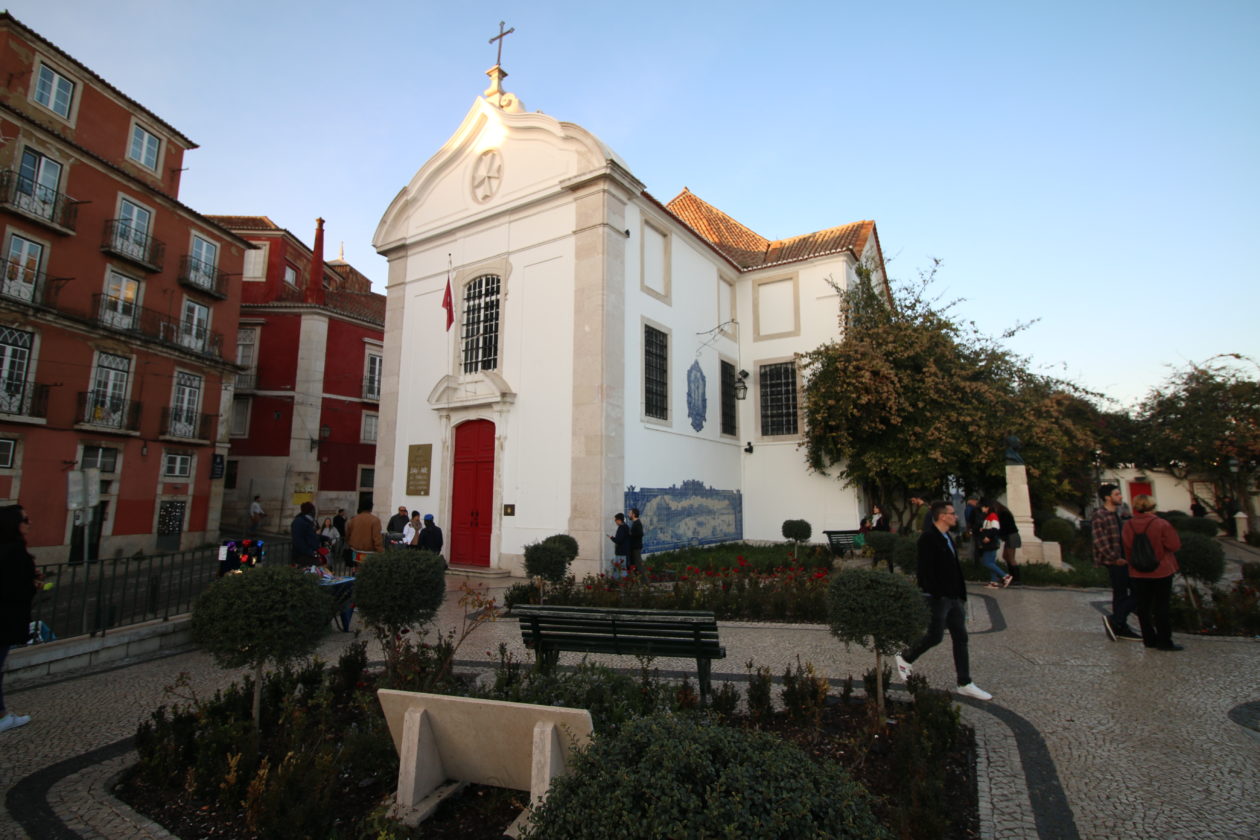 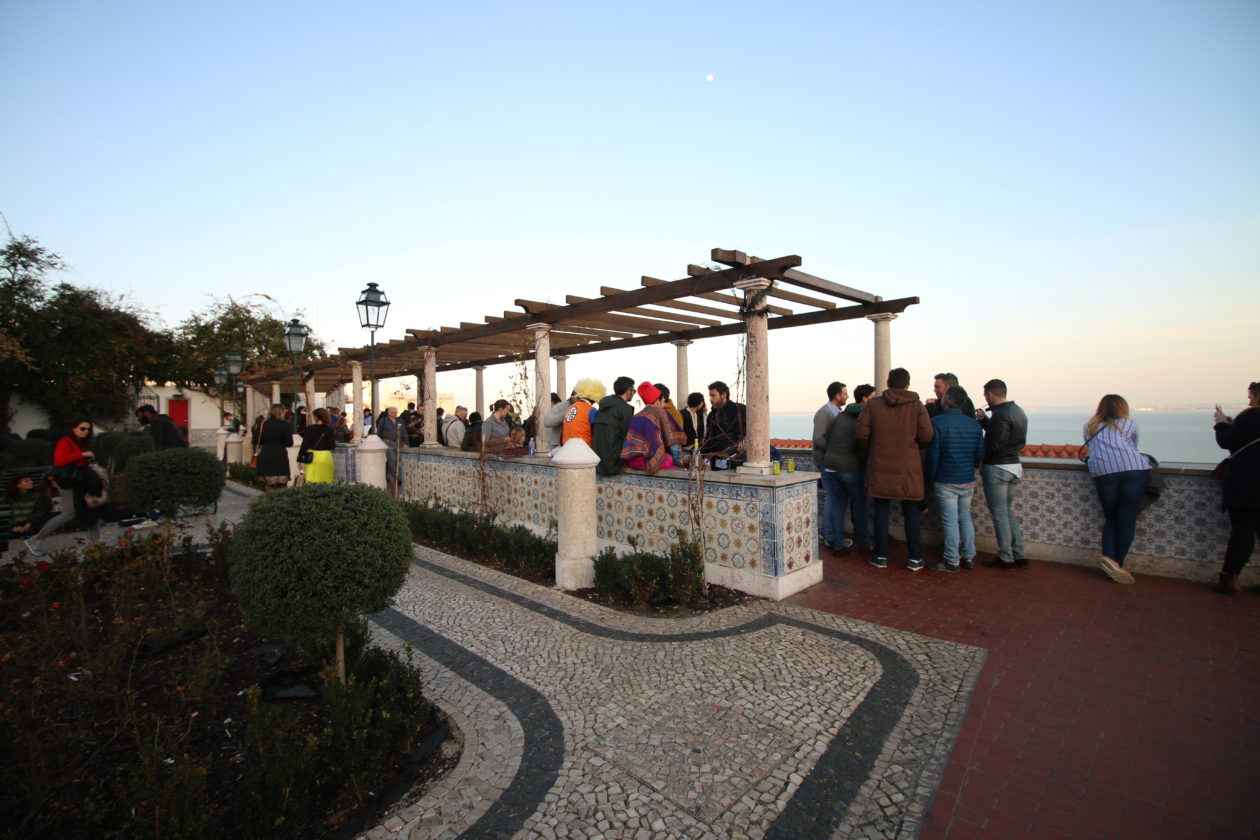 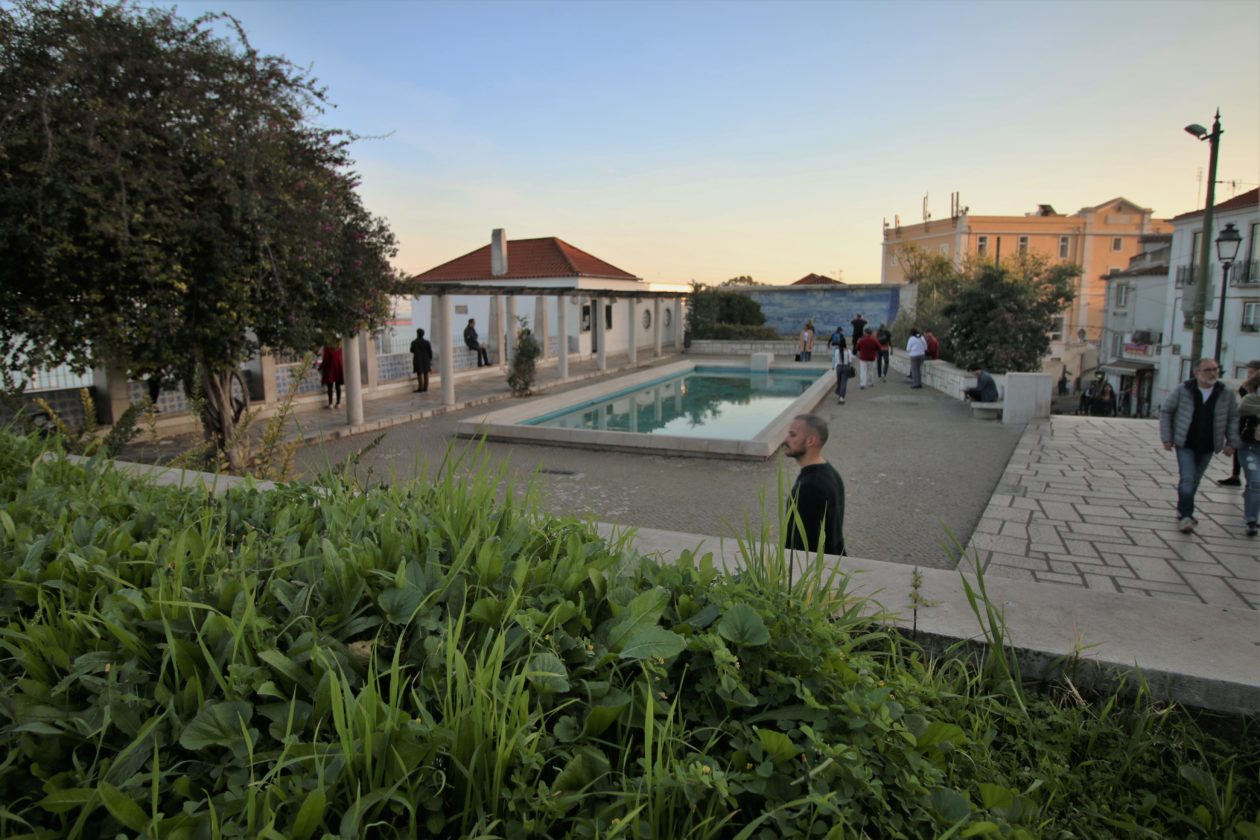 The viewpoint of Santa Catarina, better known as the Adamastor viewpoint, is located on the Bairro Alto side. It is here the meeting point of many young people from various cultures who come together to spend an afternoon with a beautiful view. The space is ample with a few steps, which were placed in a restoration that was carried out in 2013.

The late afternoon is also the most acclaimed hour, when everyone joins for the same reason and energy, the sunset.

They all call it Adamastor’s viewpoint, because in it there is a sculpture of the mythical figure of the Giant Adamastor, in the book “Os Lusíadas” by Camões.

Author: admin
Filed Under: Portugal
# 6 Amazing Historical Villages in Portugal
Marvão | A village in the heart of the Serra de São Mamede – Portugal