Merida | What to do in the capital of ancient Lusitania 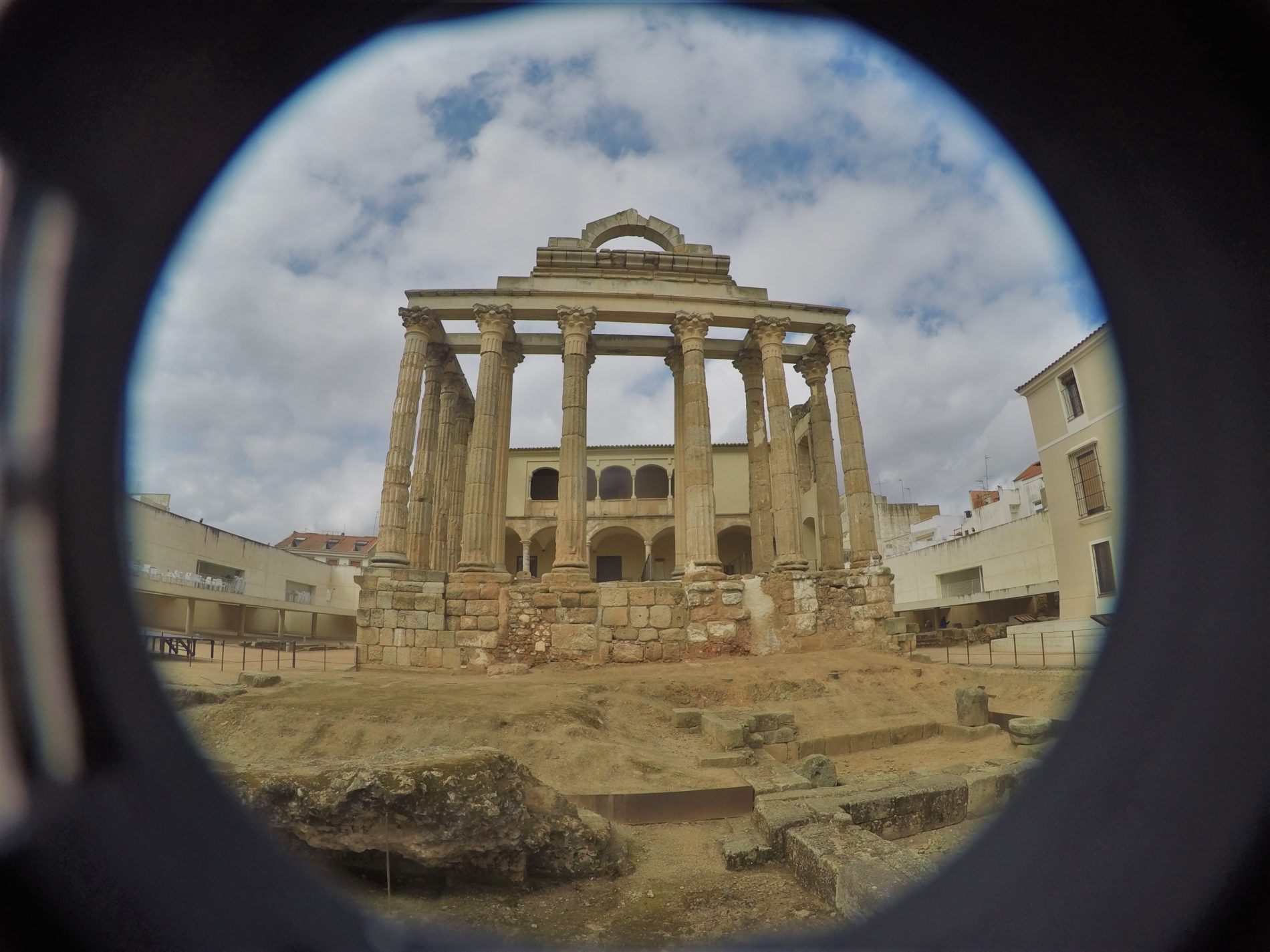 This was a destination we liked a lot. We visited by motorhome on carnival rime and we were absolutely surprised by its historical beauty. We think it is doable to see most monuments in one day, but we advise two to three days to do so calmly and in time. A weekend is ideal and a fantastic getaway, due to its proximity to the Badajoz border in Spain – it’s 50km away.

Augusta Emerita, now Merida was the capital of ancient Lusitania – which included almost all of Portugal’s present territory, below the Douro River, plus the Spanish Extremadura region and part of the province of Salamanca. It was founded in 25 BC by Order of Emperor Octavius ​​Augustus. The archaeological ensemble of Merida was considered a UNESCO World Heritage Site in 1993.

What to do in Merida?

The museums and their monuments are undoubtedly the most remarkable in a trip to Merida, but also the city center is very pleasant to stroll. When we take a walk around the city, it is common to see Roman remains on a roundabout, on some streets and even the Temple of Diana, which we almost stumble upon. The Roman bridge is also huge and grand.

Tip: You can buy a joint ticket, which goes to the main monuments. 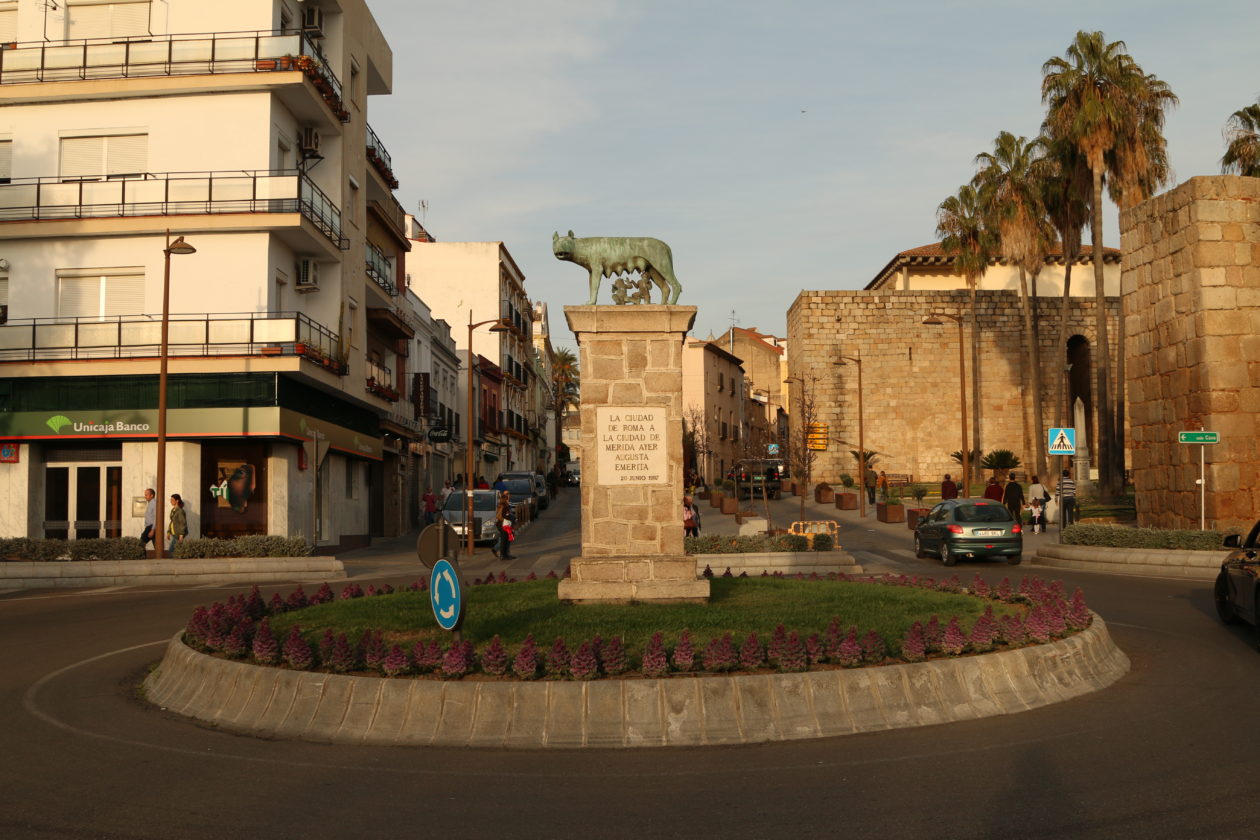 Menéndez Pida was the architect who directed its reconstruction from 1964. The beginning of its excavation in 1910 was a key milestone in Merida’s archeology. After its restoration, this is the only building that returned to its original function, having been held since 1933 the Festival of Classical Theater.

It is designed within the city’s urban plan and is situated at one end of the walled enclosure. The bench had a capacity of 6000 spectators and has thirteen doors that communicate with the outside. Divided into three sectors, they once served to differentiate by social class.

Both artistically and architecturally, the stage is the most fabulous area of ​​the theater. Among the Corinthian columns is a series of sculptures (replicas of the originals).

Behind the scenery, a large garden area was built surrounded by columned porches that served as a play area. 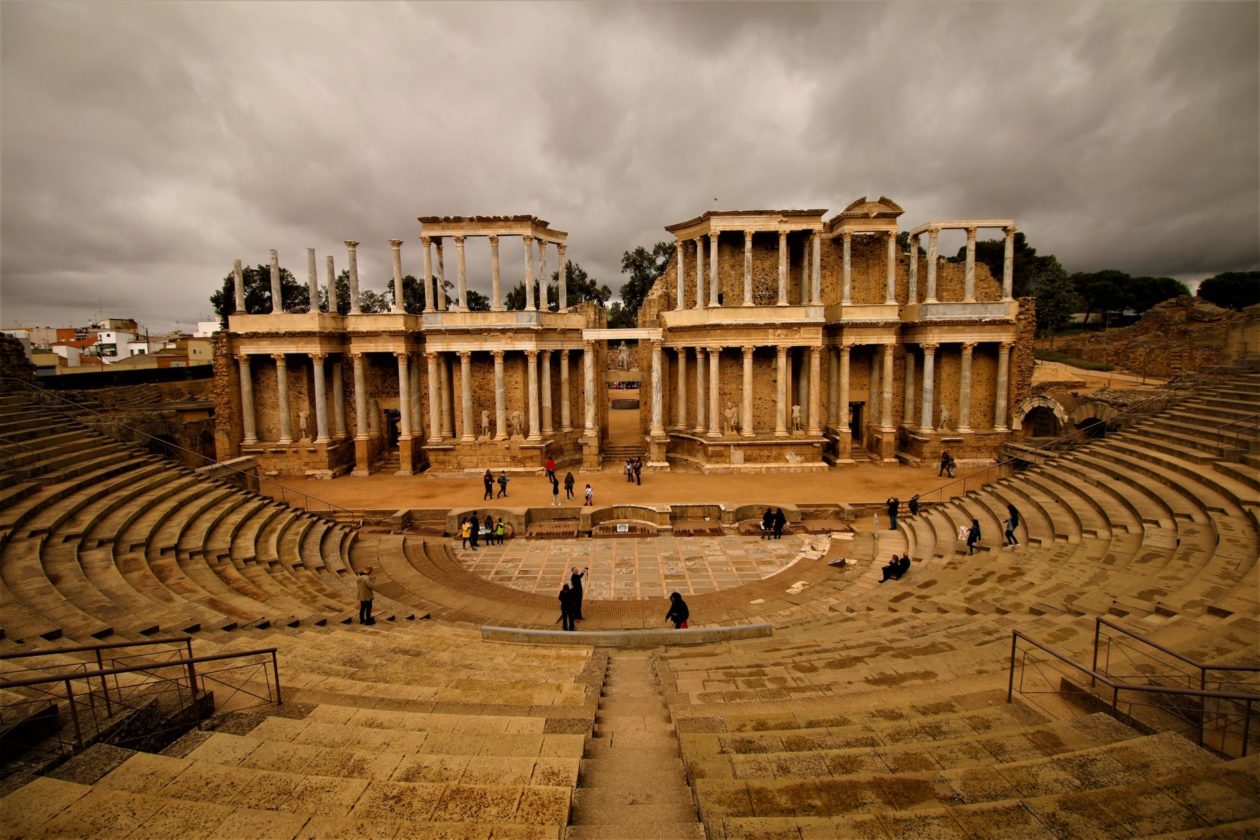 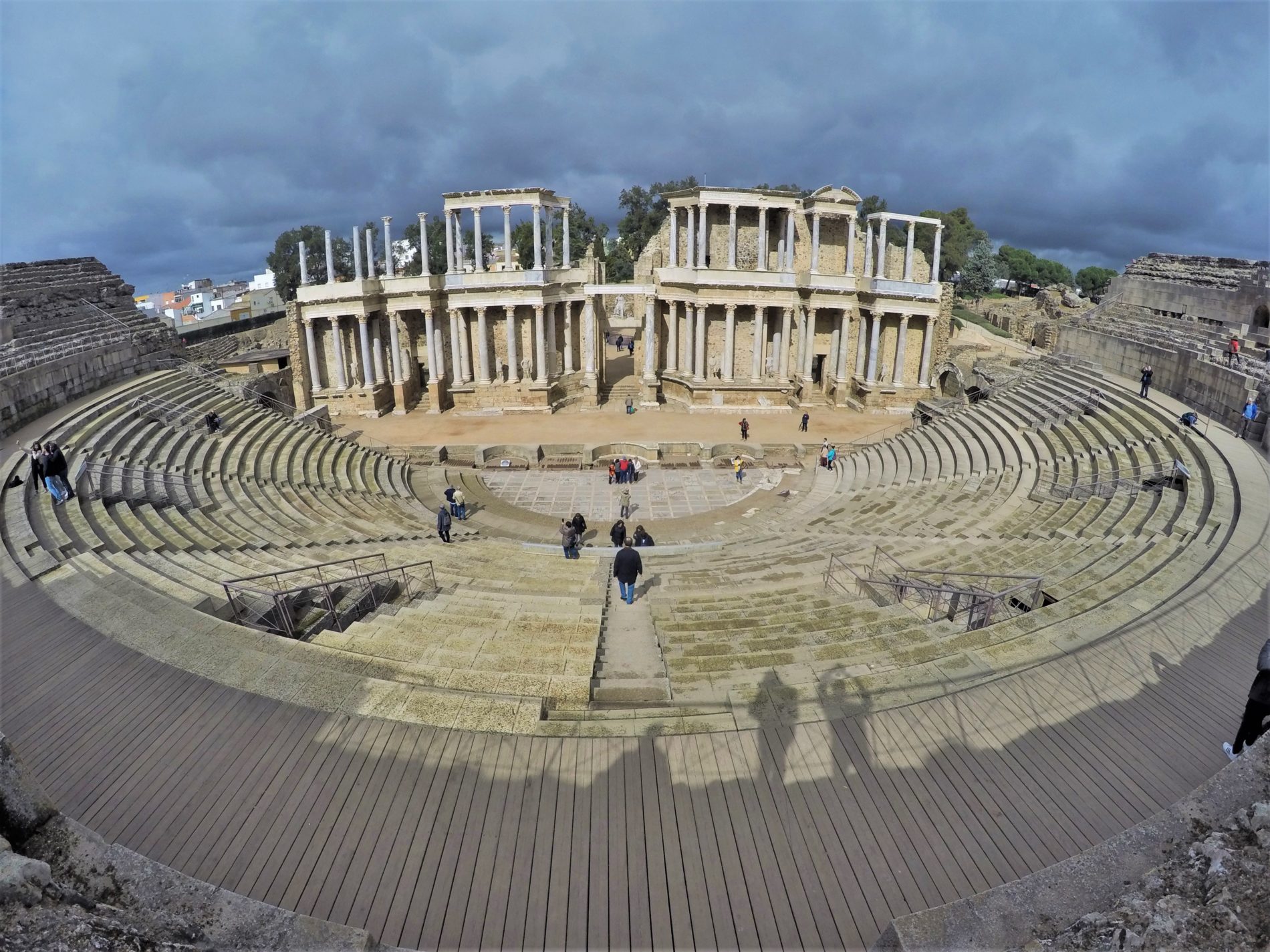 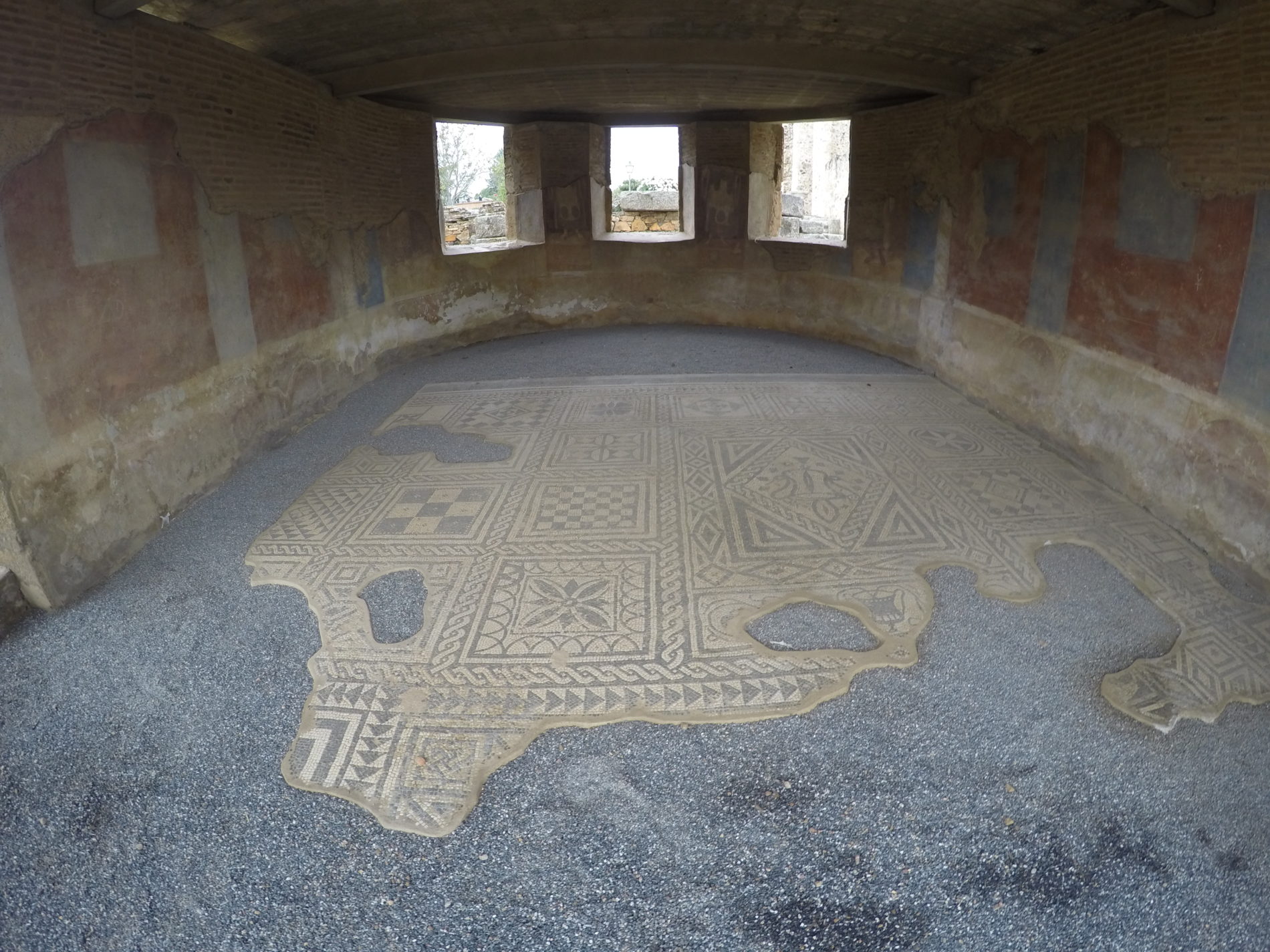 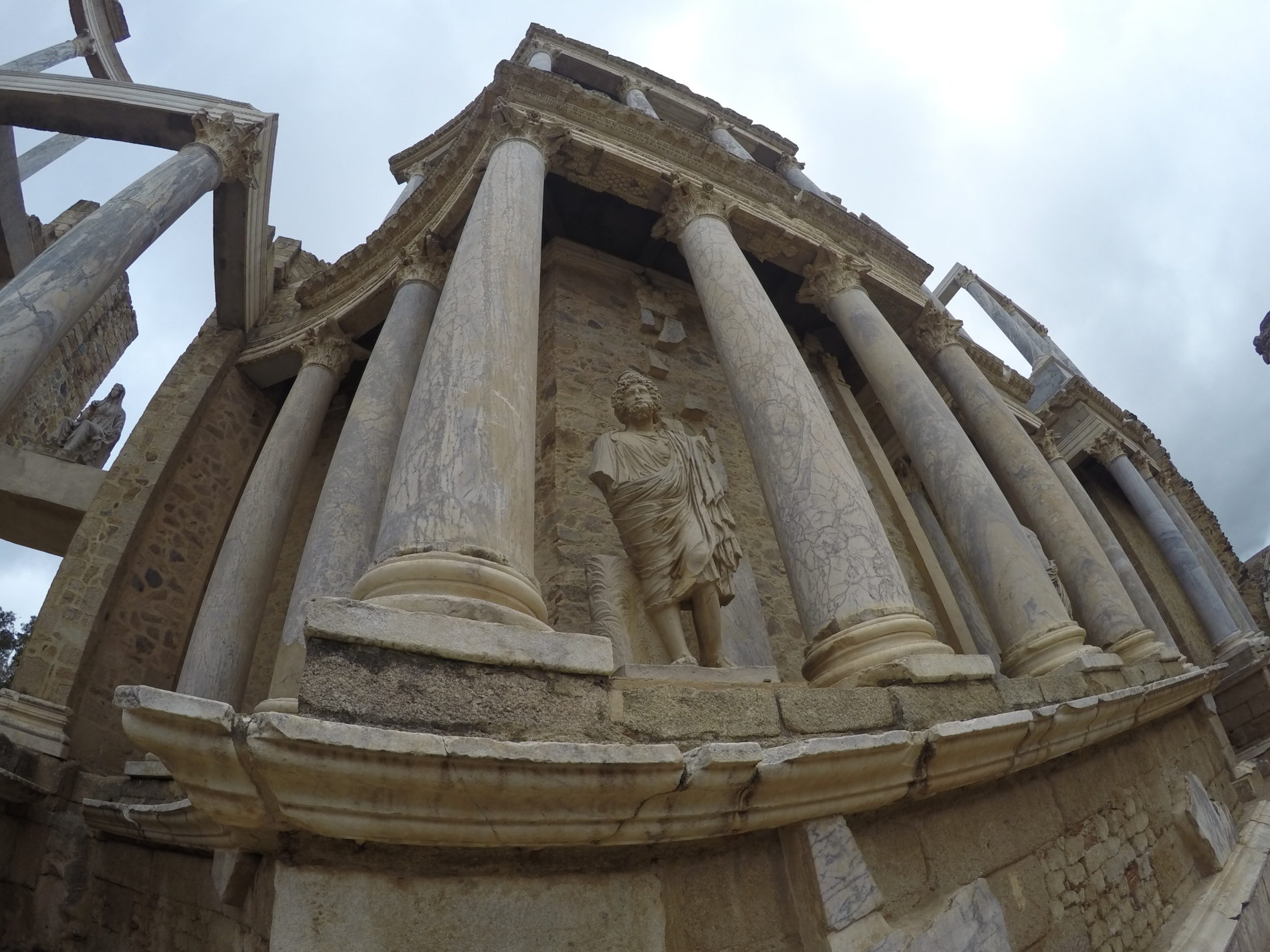 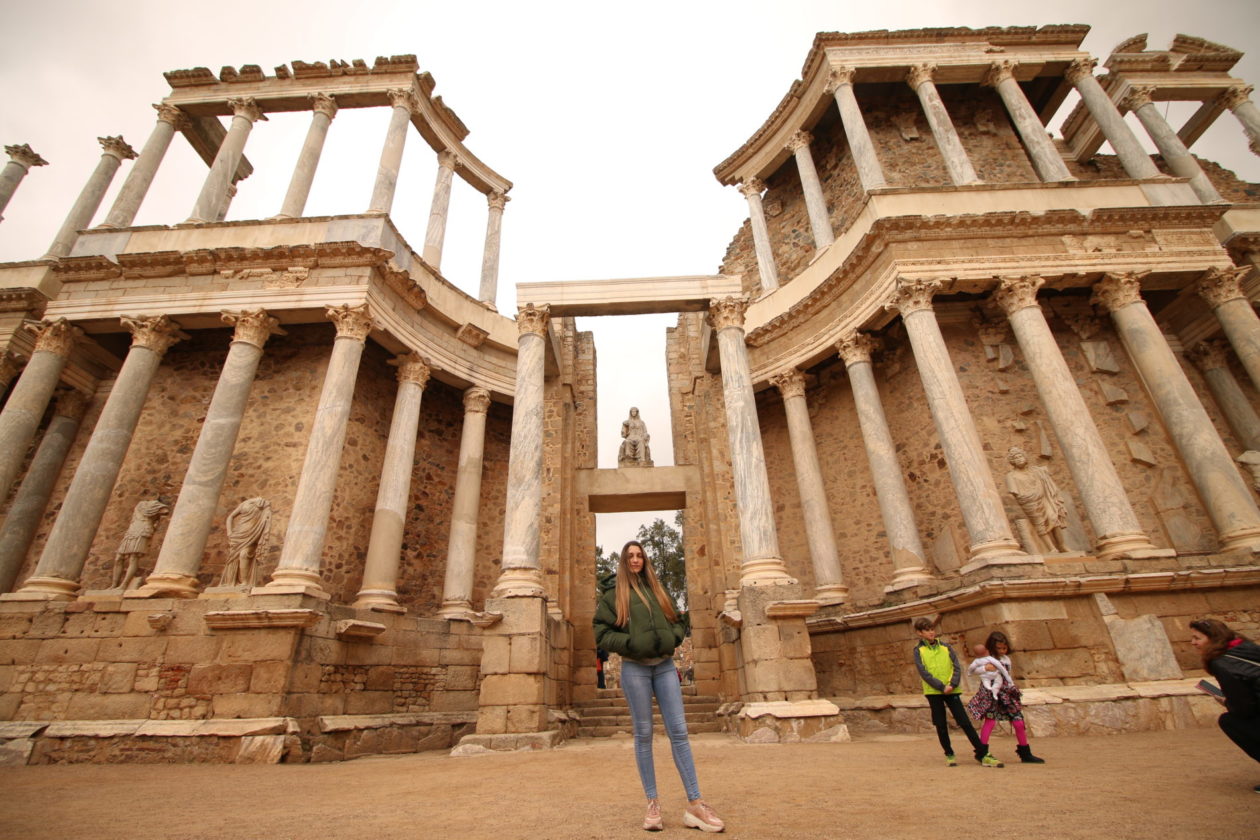 Rafael Vallez’s work, this is a colossal building, with a use of the half-point arch, the use of cement and brick, recreates the great buildings of the late Roman period.

Inside we can see numerous collections of Roman sculpture and mosaics of the peninsula. The elements are all very well preserved and allow us to get closer to the daily life of the first emeretenses.

This visit gives us an overview of how this great Roman city worked and how a vast province, the westernmost of the Roman Empire, was administered.

Tip: The Museum is free from 14h on Saturday and during Sunday morning. We happened to go on a Monday and we didn’t pay either. The normal price is € 3 and the reduced rate is € 1.5. 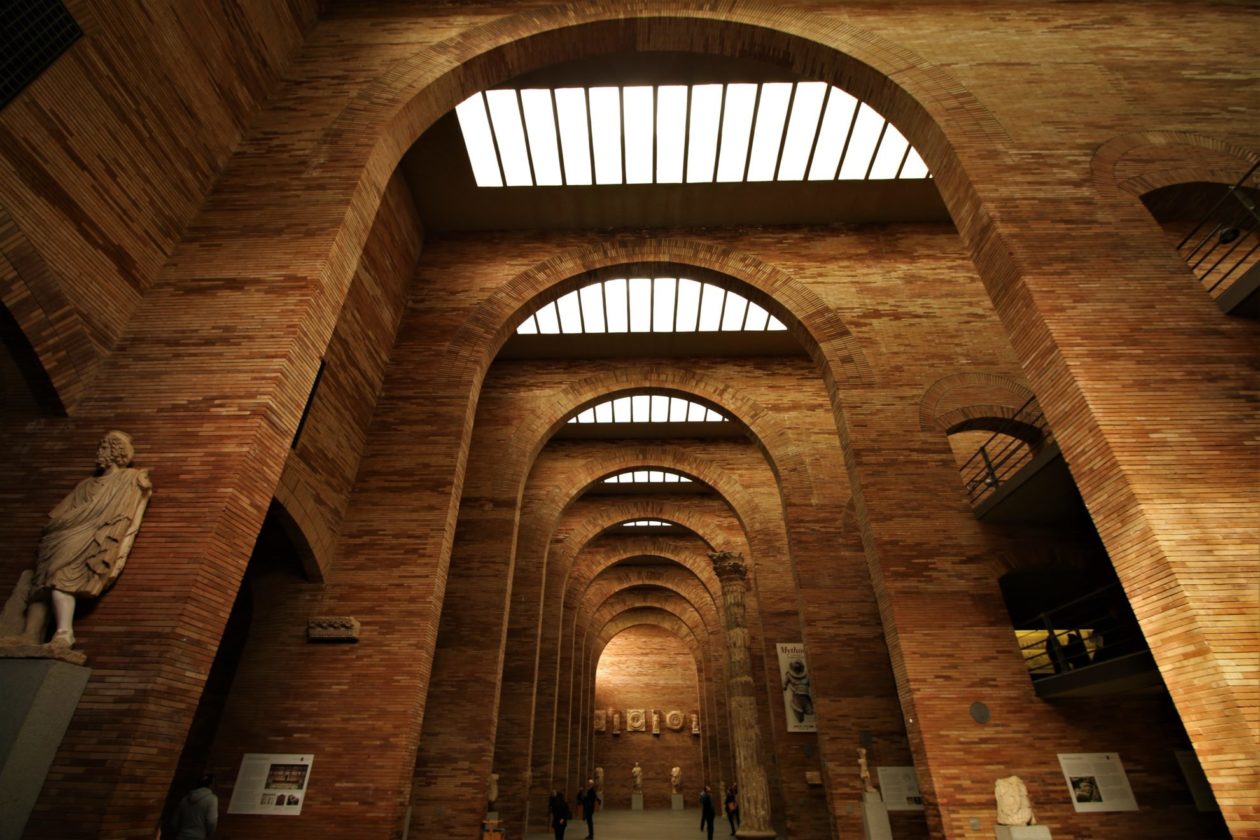 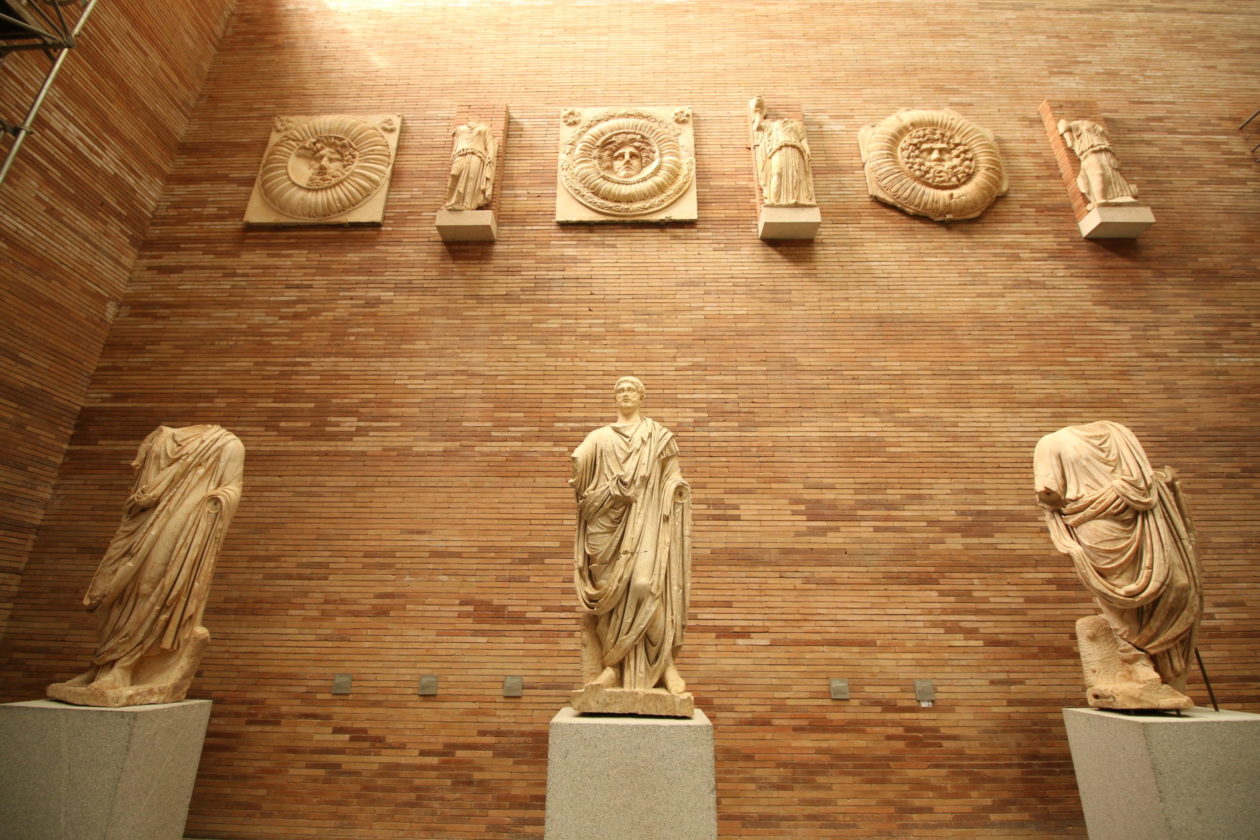 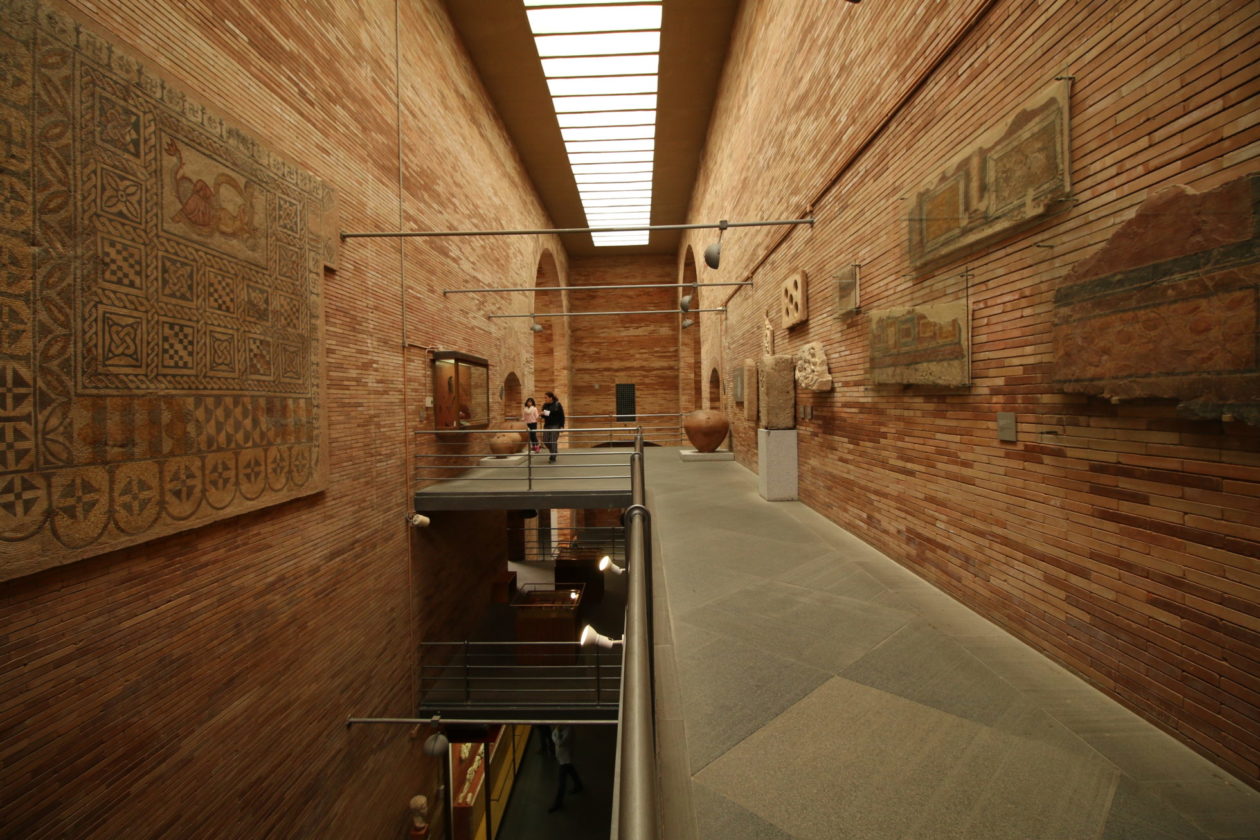 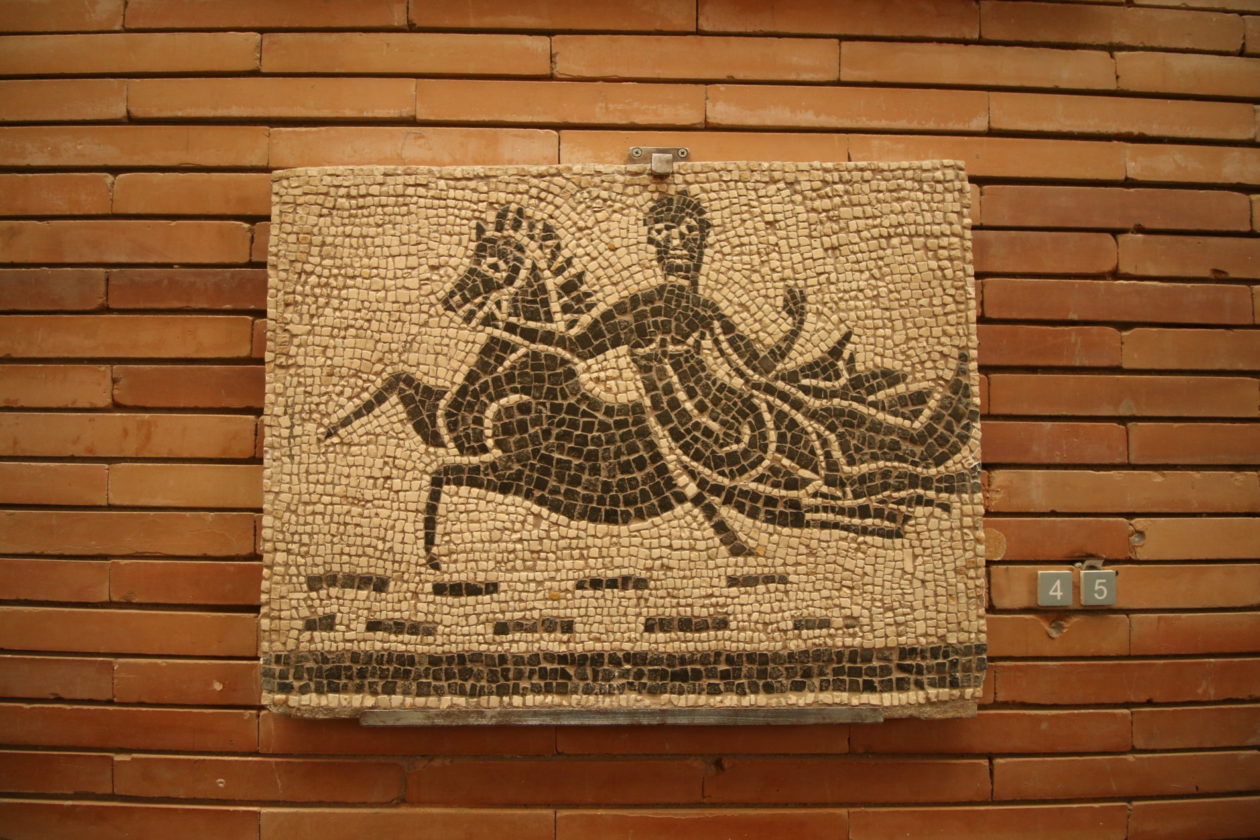 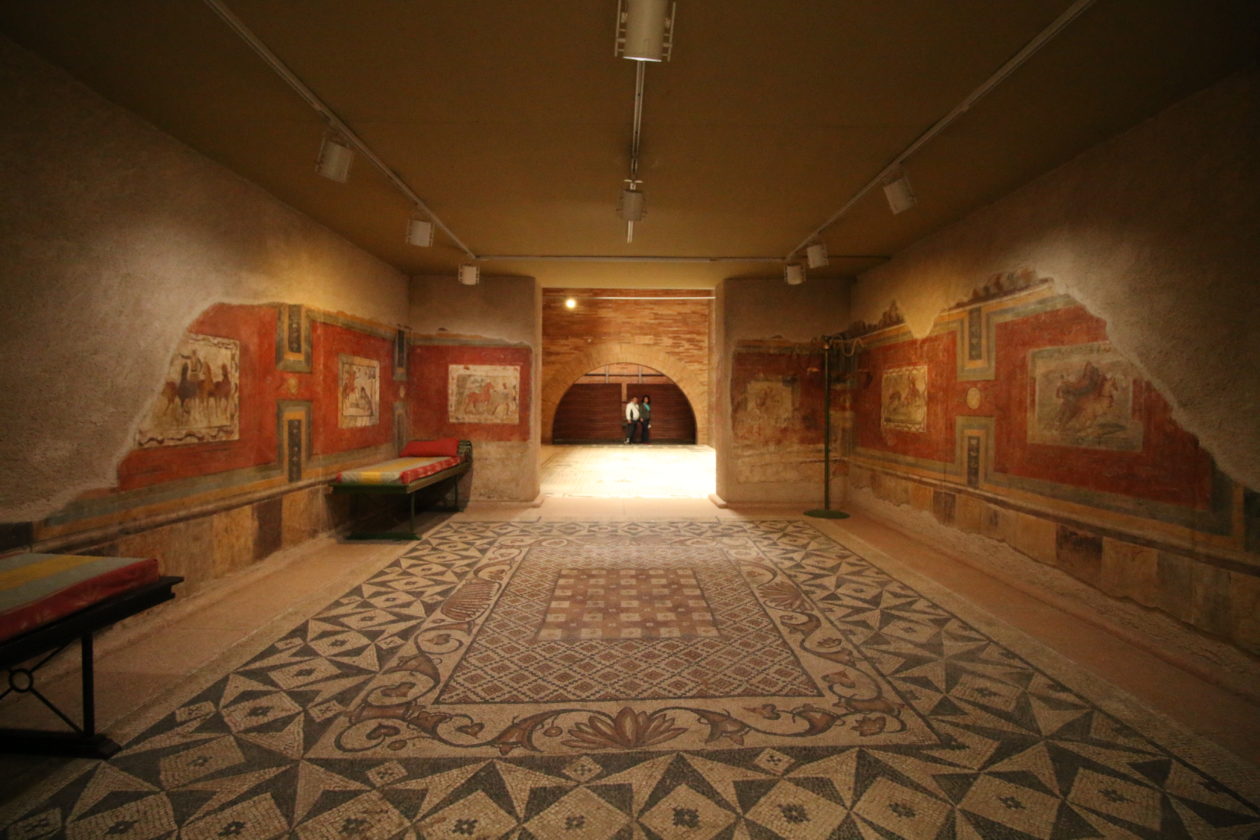 The forum was the main public square of the Roman cities. Augusta Emerita, had two forums. At present we can contemplate a reconstitution of its volumes from the traces found in its excavation.

It is called by this name, Temple of Diana, since in the century. XVII called it D. Bernabé Moreno de Vargas, local historian. It began to be excavated in the year of 1972 and it was verified that in fact it is a temple destined to the Imperial Cult.

Of the oldest Roman buildings in the city and the only example of Roman religious architecture that has endured in Merida in excellent condition. 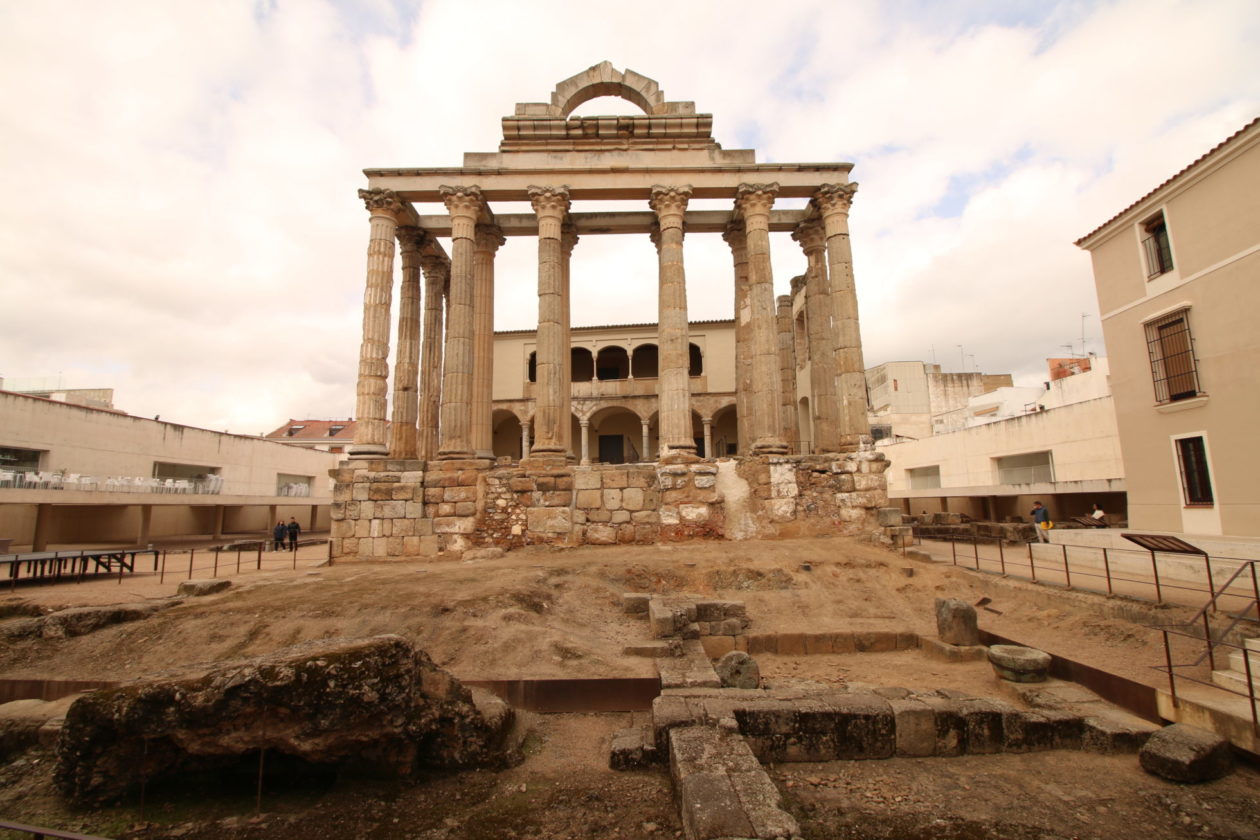 This inscription is made on a marble plaque and was installed over the Alcáçova access door to commemorate its construction, being the first monument erected by Muslims in Spain.

The occupation of Merida in 713 by the Muslim army under General Musa ibn Nusayr, after a long siege, marked a new milestone in the evolution of the city’s history. This was the beginning of the secular slope that would not recover until the mid-19th century. XIX

The main objectives for this construction were to protect its rulers and subjects during the frequent revolts of the Emirati, as well as to control the passage through the bridge over the Guadiana river. 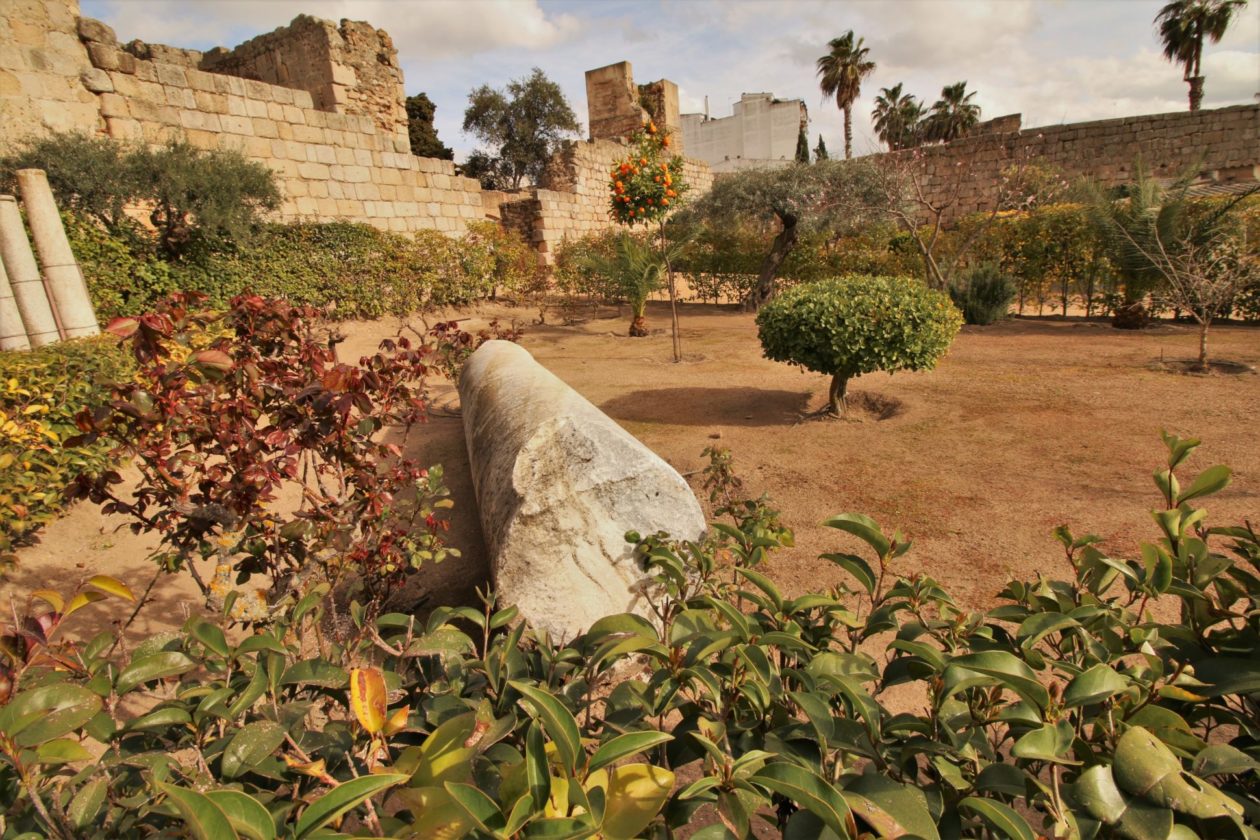 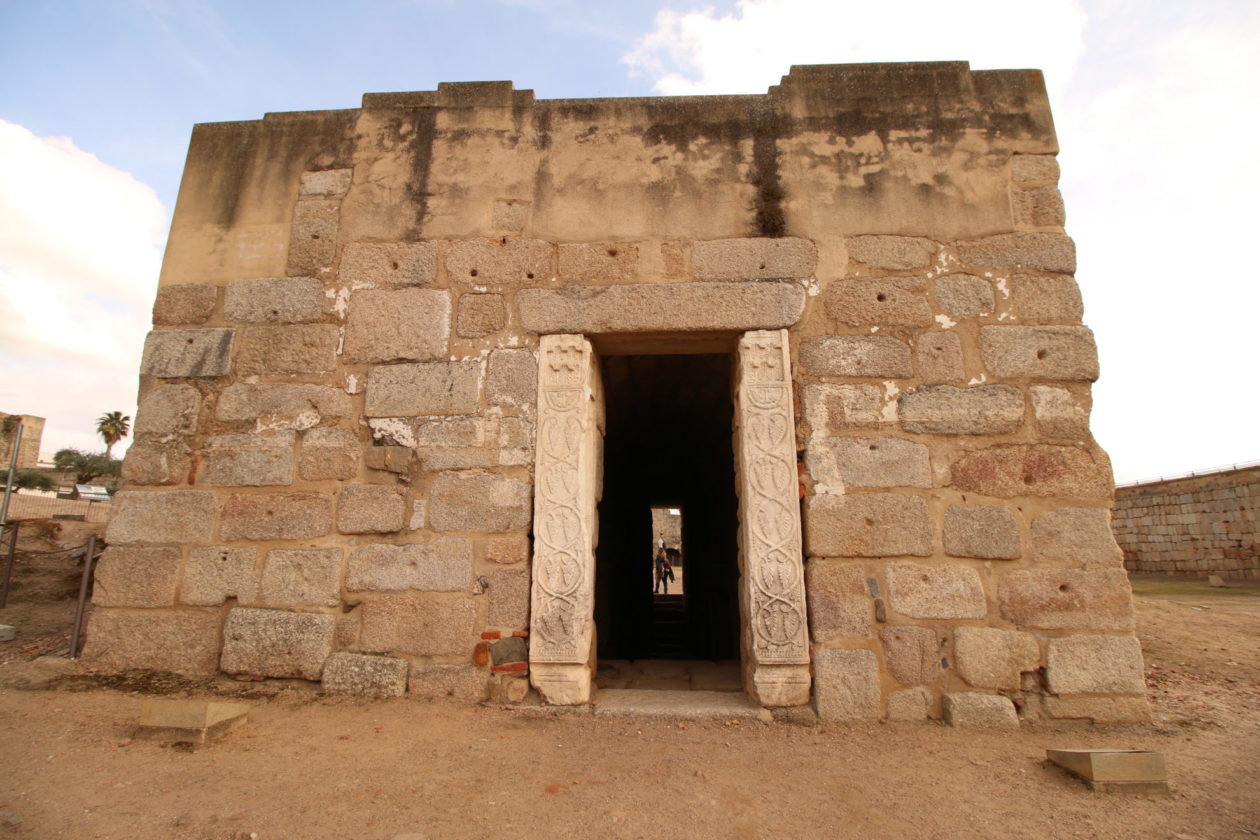 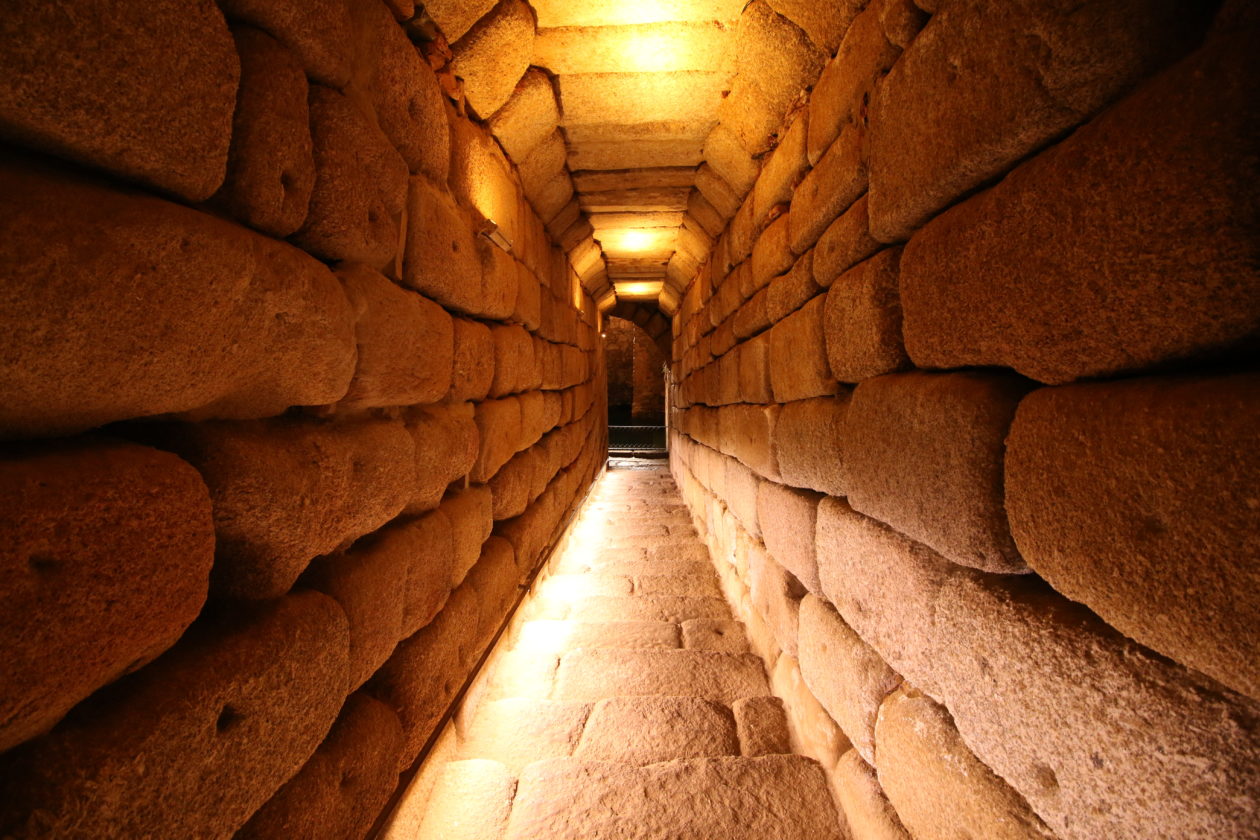 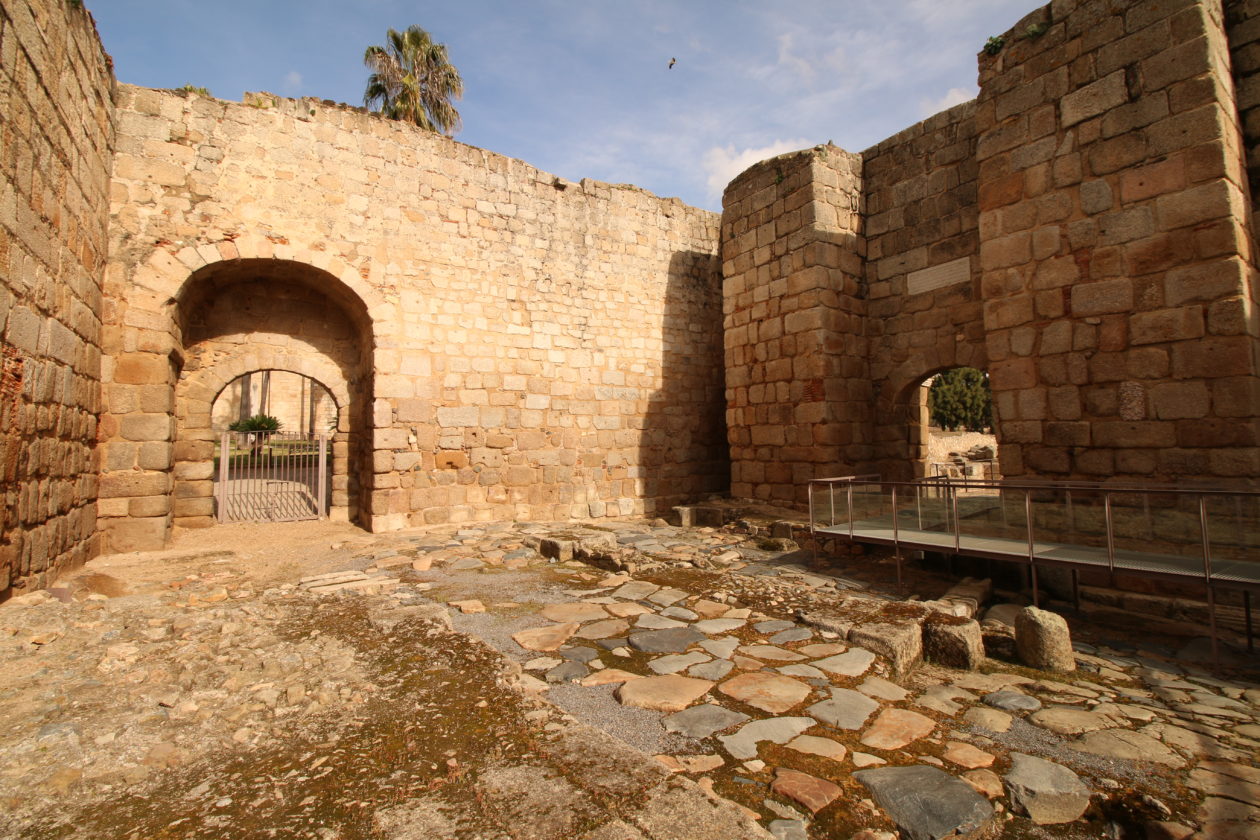 It is known by this name because of its proximity to the remains found in a manor occupied by the bullring – these remains are related to the worship of Mithras.

The house was built in the late 1st century, or in the early 2nd century. Some of the structures or decorations are from later dates, given the remodeling that their use made necessary.

As in all villas of this type, two elements stand out in it: on the one hand, the decoration of its structures, paintings and mosaics, which allow the owner to reflect on the power and wealth, and on the other, the predominance of open spaces over closed. Some rooms were for family use only, while others were for guests only. 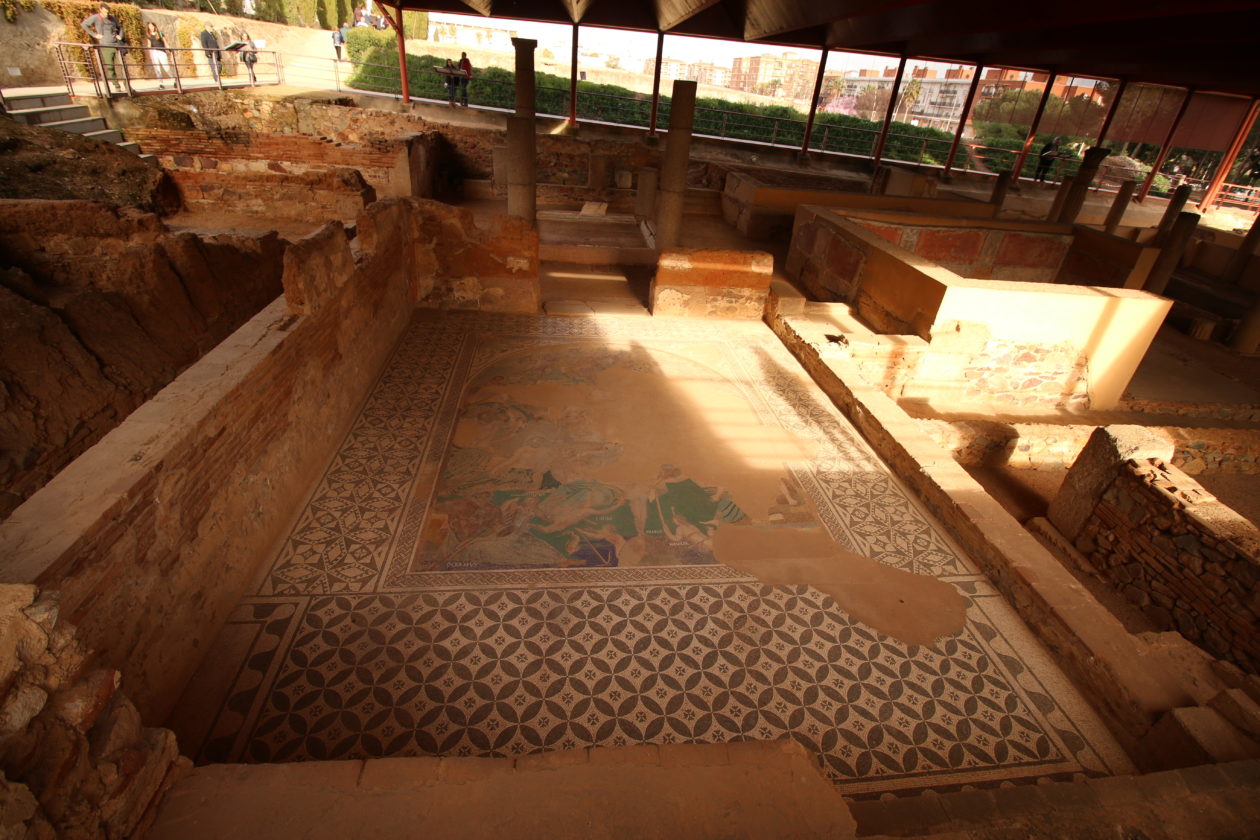 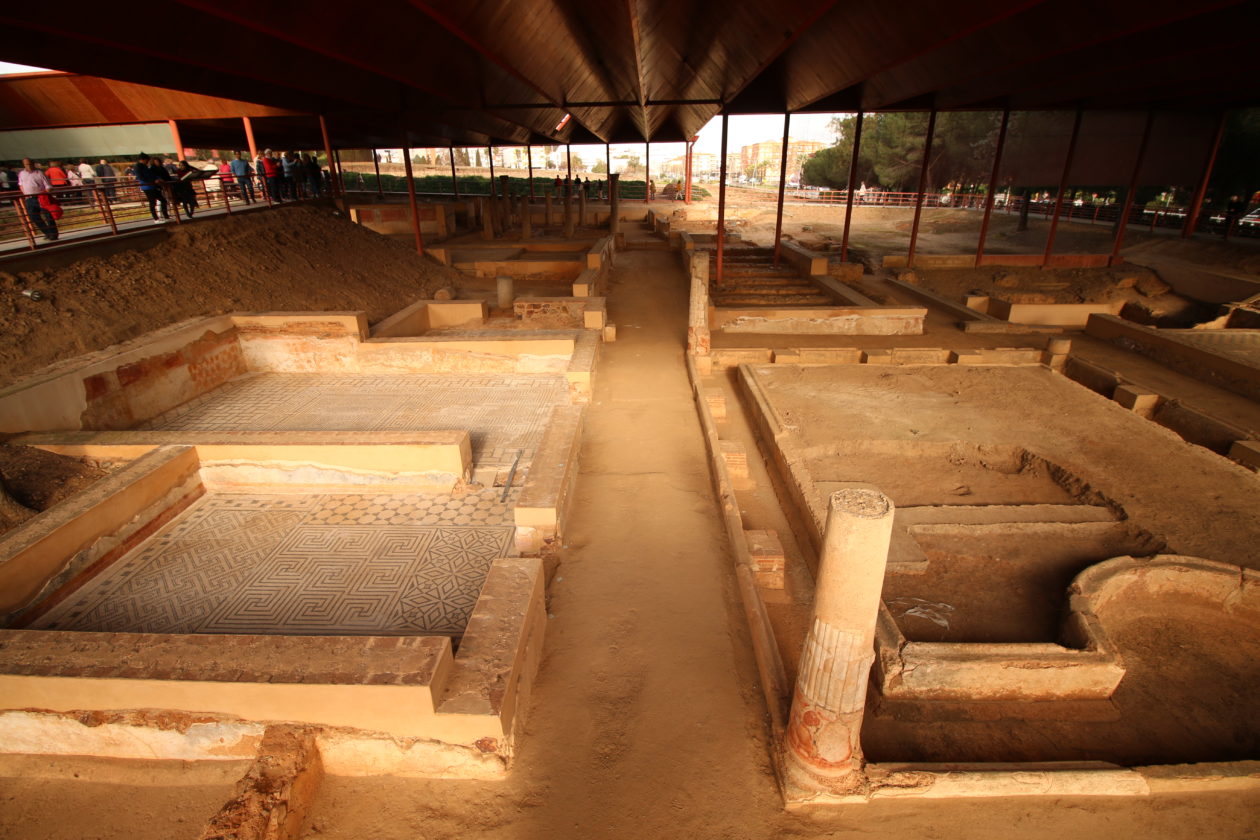 When designing the city Augusta Emerita, one of the main problems to be solved was the supply of water to satisfy both the industries and the needs of their inhabitants. So, some dams and aqueducts were built.

Through this aqueduct flowed the water from the Proserpina dam to Merida. It is a powerful arch, 830m long and 25m maximum height. Its slender arches were made of granite combined with brick, which gives an original chromaticity to the work.

Its construction is supposed to have taken place at the time of Augustus, late 1st century BC / early 20th century. I AD, although in Roman times it should have undergone some restoration. 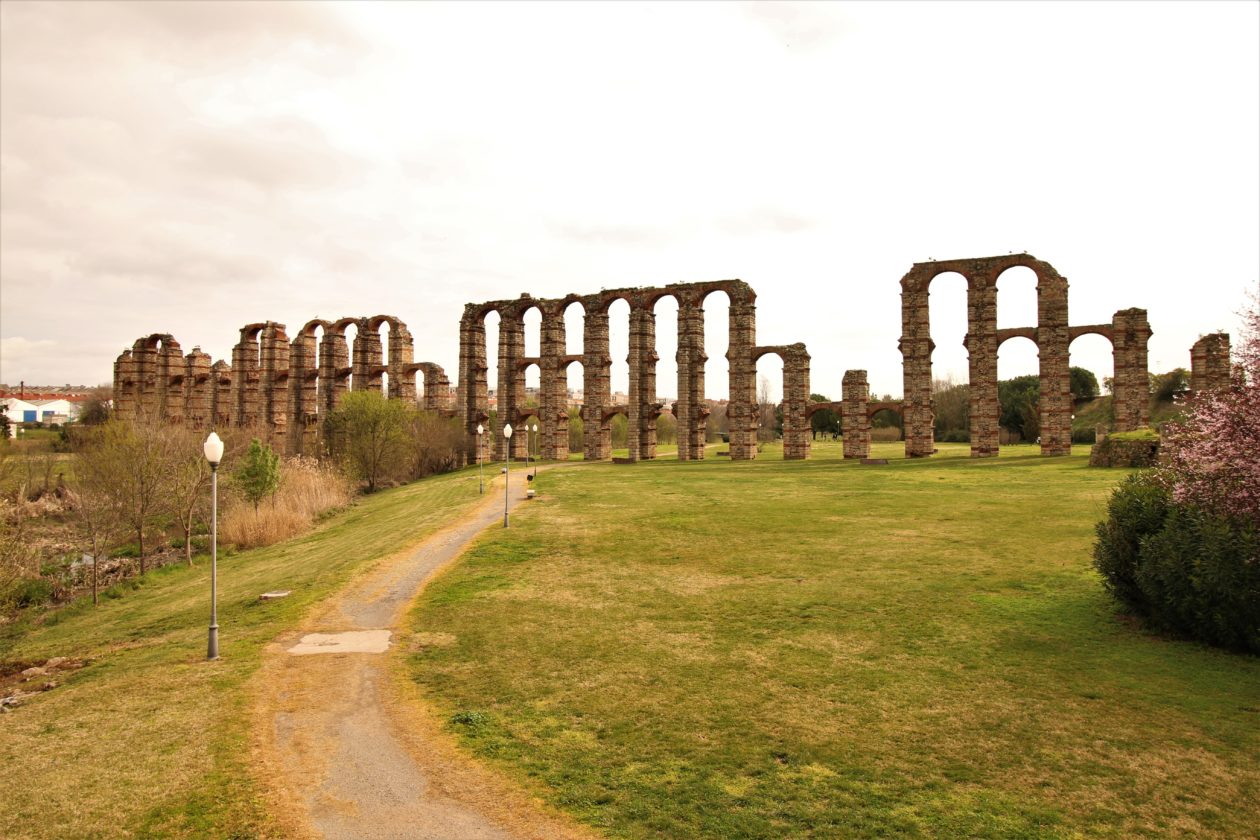 Since the foundation of Merida, the city has become the most important communications center of the western Iberian Peninsula, both for its category as the capital of Lusitania and for the ease of passage that gave the Roman bridge over the Guadiana River.

Traces of its original appearance can be observed in the sections corresponding to the beginning and the end of the work, since on one hand the great floods of the river, and on the other warlike conflicts, made numerous restorations necessary.

The bridge measures 792 m in length and 12 m in height from the average water level. It has 60 arches and holes between them in areas where the current strength is greatest. Construction began to be exclusively pedestrian on December 10, 1933, the day the new Lusitania bridge was inaugurated. 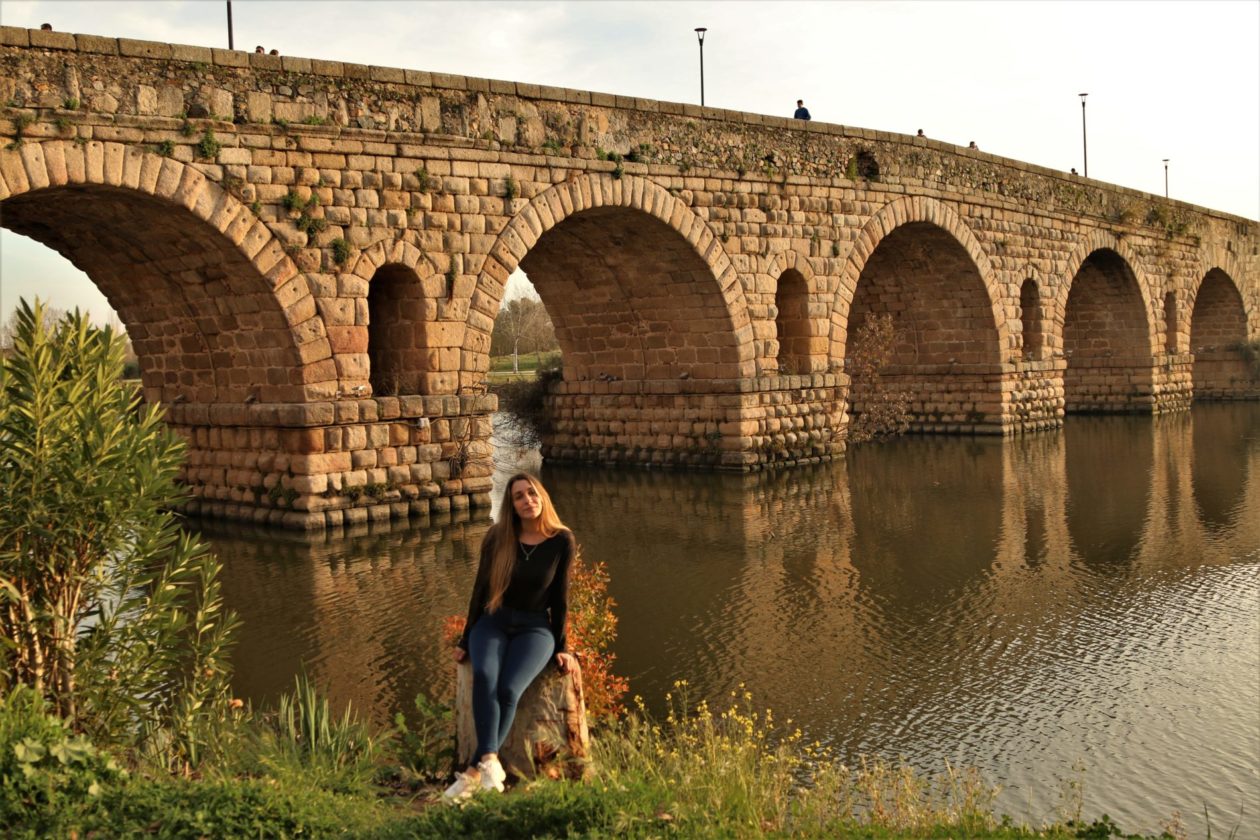 The competitions that took place at the circus and the functions of the amphitheater were the two types of shows that most attracted the attention of the people in Roman times.

Due to its length and spectator capacity, the circus is the largest of all public spectacle buildings that were built by the Romans in Merida. It is believed to have been built in the early years of the century. I d.C, shortly after the foundation of the city.

Its plant measures approximately 400m in length and 115m in width, corresponding to the common model of this type of works. The capacity was for 30 000 spectators. 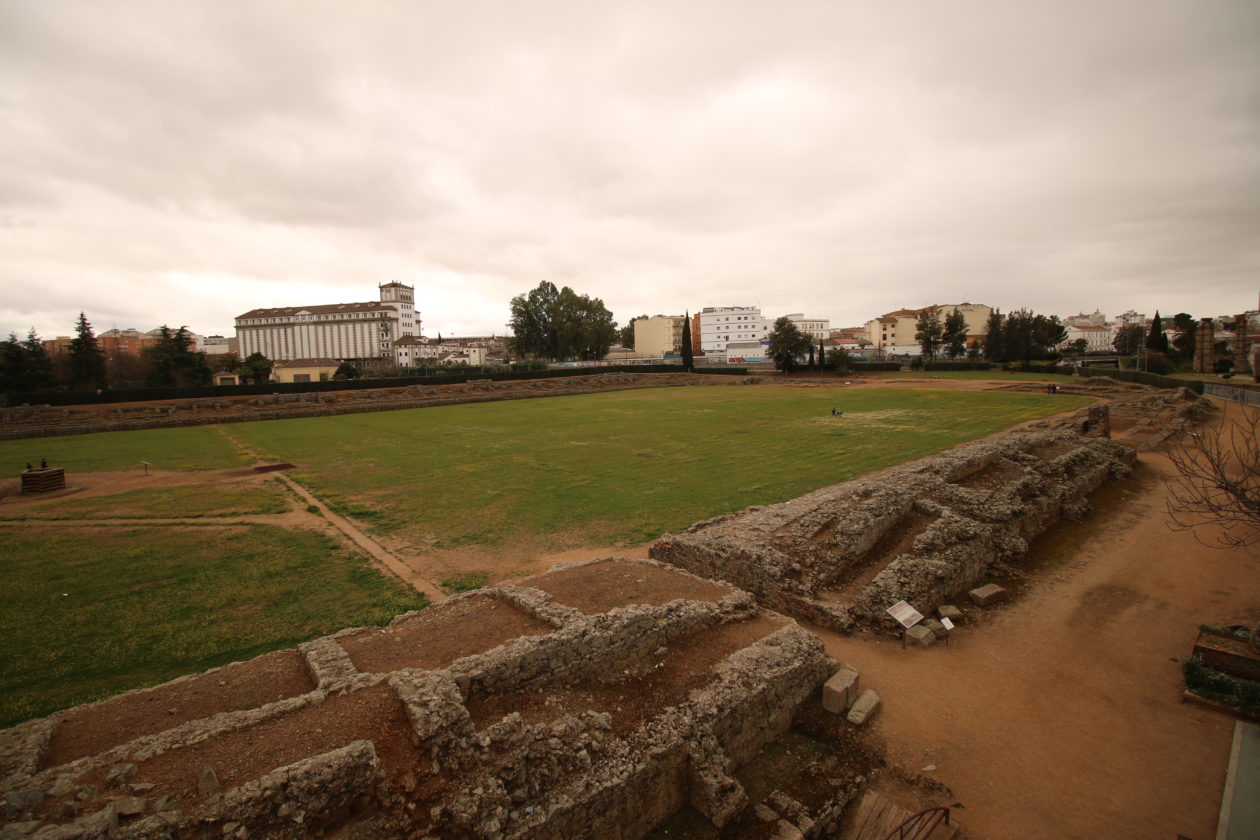 Its denomination is a product of the popular emeritense tradition, having no justification of any kind. It has 15 m of altitude and is made with large granite silvery and these, in turn, would be covered with marble.

It is situated on Kardo Maximus – the main thoroughfare of the Roman city, which ran from north to south – and perhaps gave access to a sacred space that would precede a temple dedicated to imperial worship. 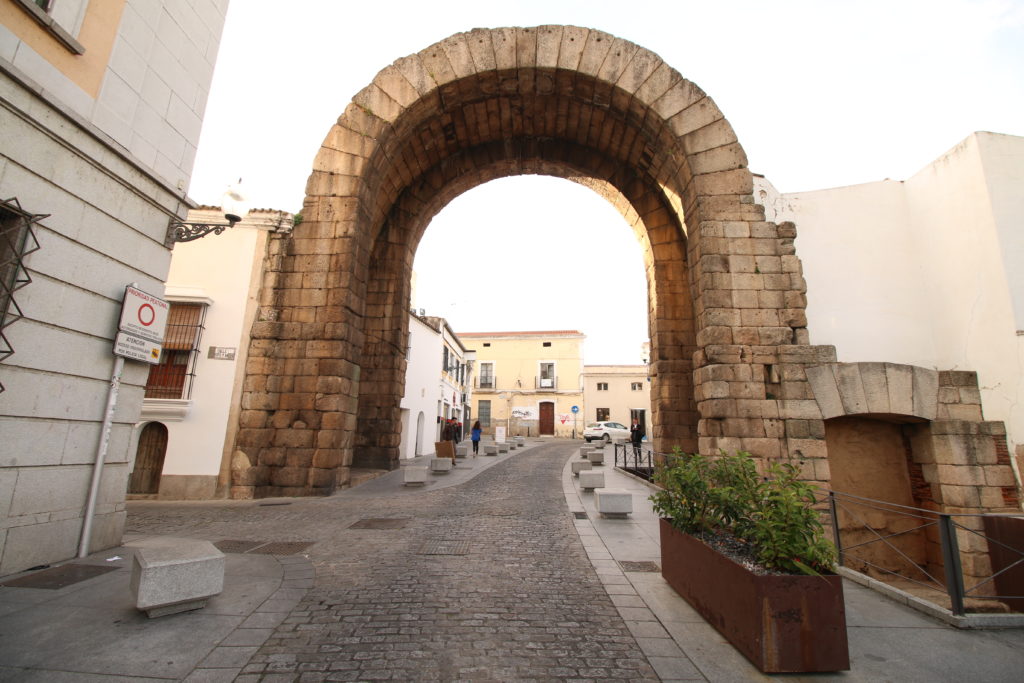 In 1990 began in the church of Santa Eulália restouration works, which gave rise to archaeological excavations of its underground, with the intention of defending and knowing the remains that were in the solar.

It is possible to visit the underground of the church, where through a prepared itinerary, we can see archaeological remains uncovered.

The church in 875 was under Muslim rule and the Christian community of Merida had to emigrate to Badajoz, leaving the basilica of St. Eulalia, although the memory of its existence was not lost. After the reconquest of the city it was rebuilt, giving way to the present church. 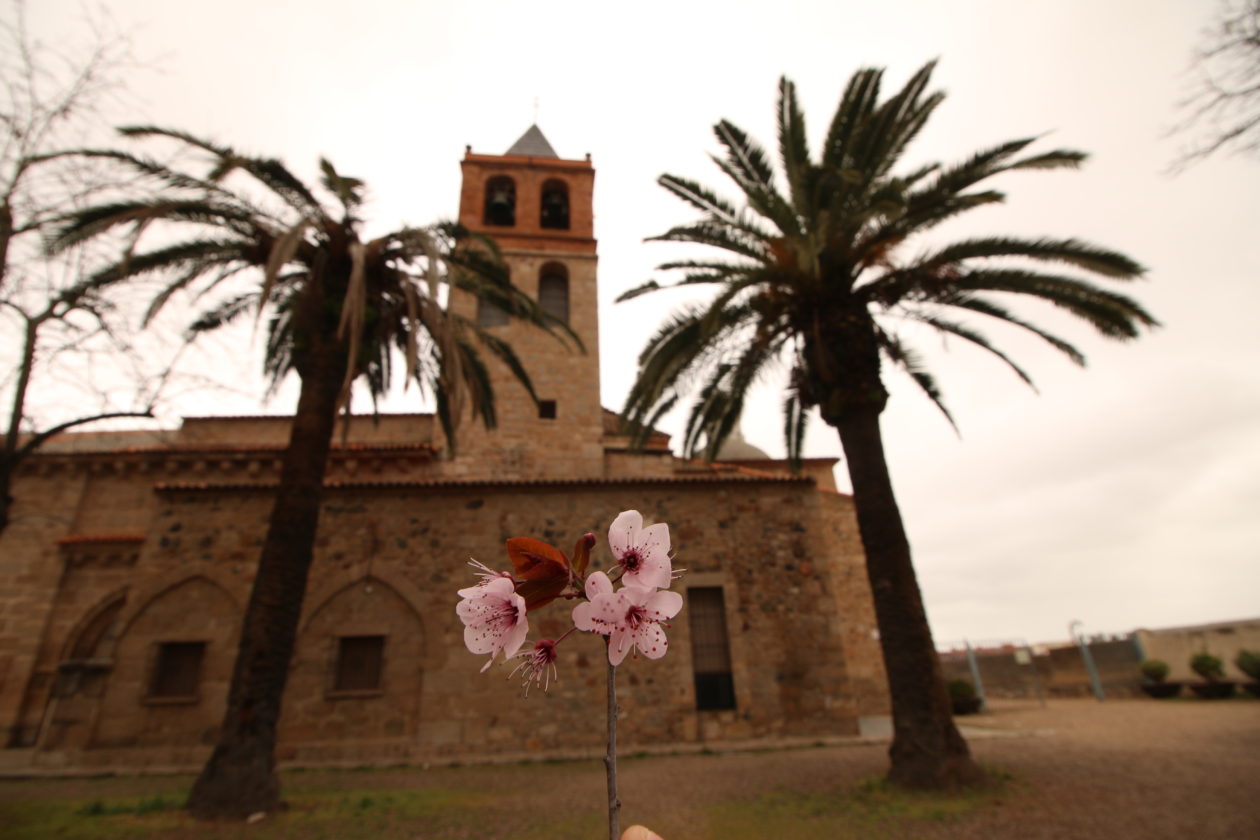 Next events in Merida)

Overnight in a motorhome:

For overnight in a motorhome in Merida with some conditions (no noise and close to the center) there are not so many places, at least we have seen.

In the center there are some parking lots and parking is complicated. We chose to park about 1.5km from the center, next to the Guadiana river in a place where the fair is held on Sunday. We don’t think it’s the ideal place as it is a bit far from everything but it is an option for those who don’t want to spend money overnight. It is near a park where people usually go jogging. We stayed there two nights without problems. 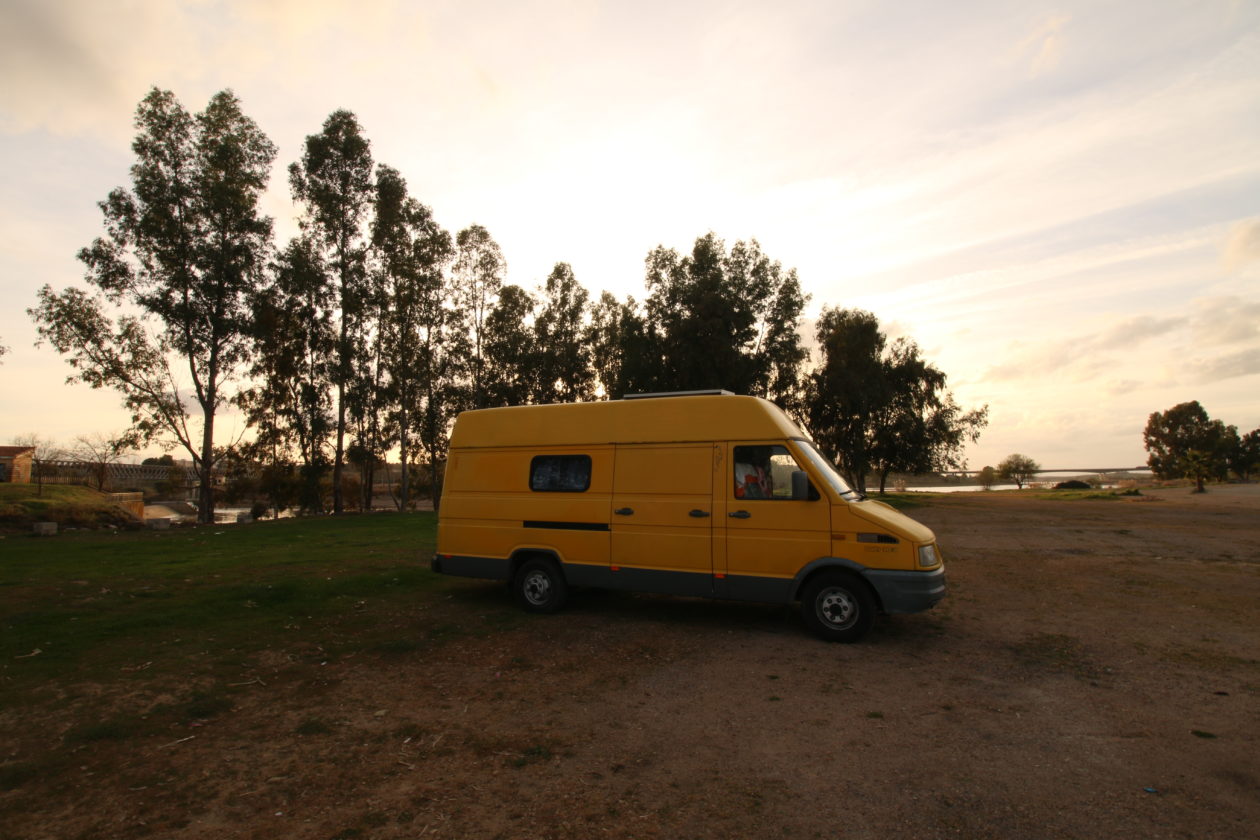 Before we arrived in Mérida we had lunch in a very cool dam, calm and that should provide a good summer dives. 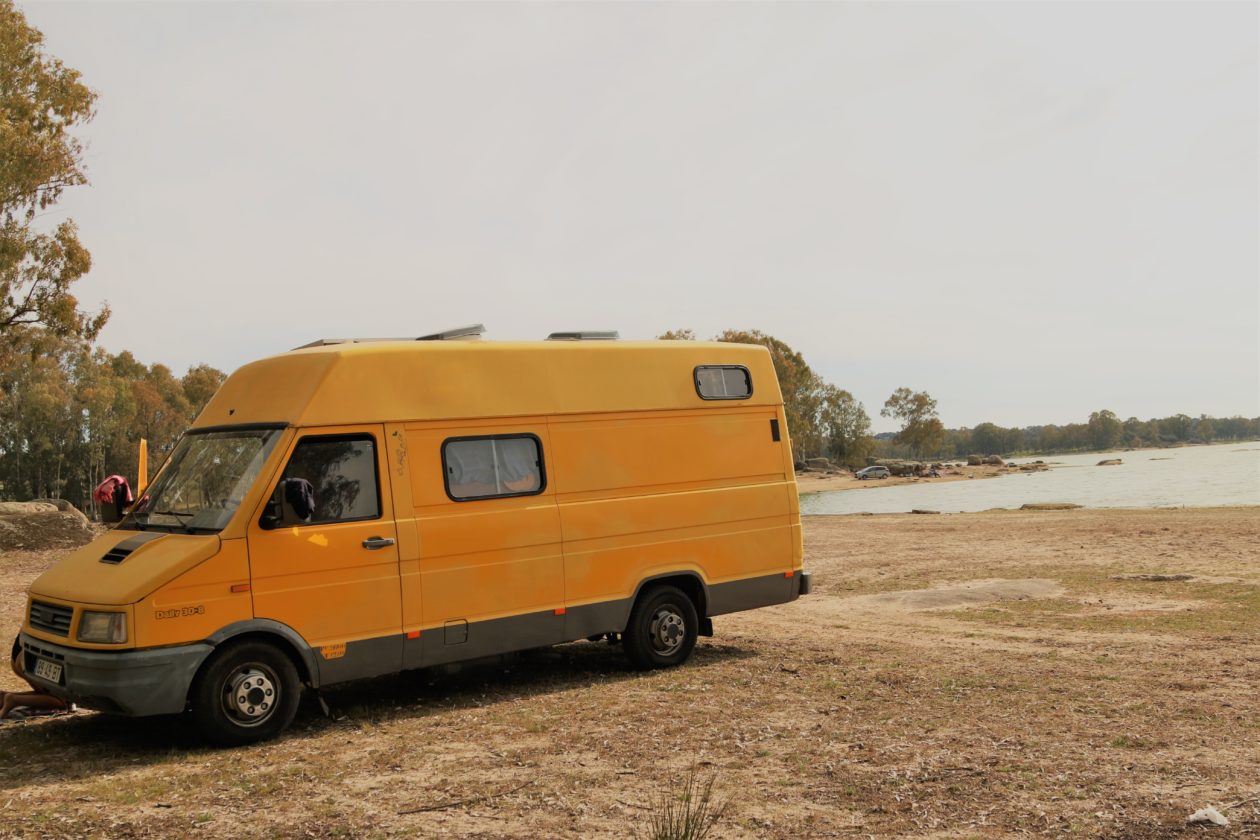