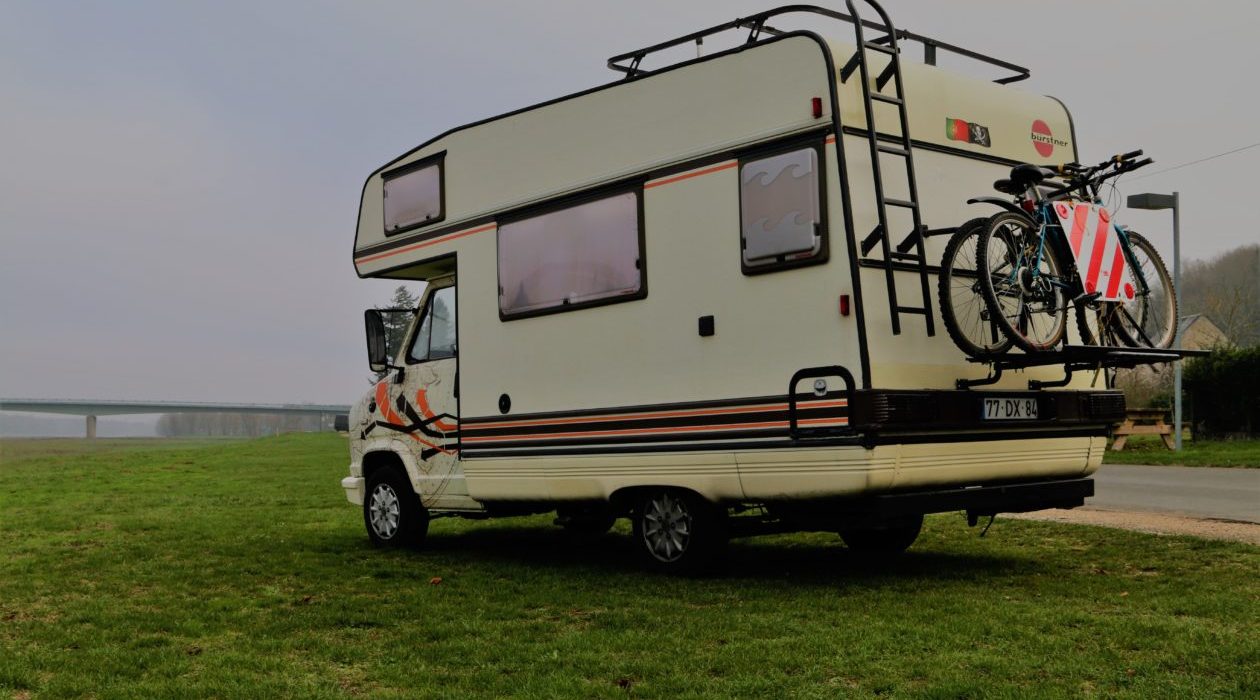 Our house on wheels was a key part of our trip, it provided us unique moments and took us to 37 countries without ever letting us down.

Before we began our search for our traveling companion, none of us had ever entered a caravan, or had any contact with this way of traveling, we had only done wild camping and car trips so it was all a new thing.

During these 9 months we developed a very special relationship with our caravan and with this way of traveling.

Traveling this way connects very well with our personality, we do not mind living in a small space, and we are tidy which helps immensely, besides we are not people who need much, not many things and all we needed was in those few square meters.

There was a time when we did not have electricity inside the caravan, that is, we had no water (the electric pump did not work), we had no light, no hot water or anything and we sincerely were always well, this was good to make us realize that what really mattered was that we had the happiness of traveling, and that we only needed a bed and that the van continue to run to continue our journey.

For about 4 weeks, we always had candlelight and heated the water to wash ourselves in the pan, until one day miraculously our problem solved itself and we traveled another 7 months without any other electrical problem.

This is to say that maybe not all people are “ready” or willing to make a trip like that for so many months, and that living in a caravan is not the same as being in a hotel, but actually … What do we need more? We have bathroom, kitchen, living room, bedroom .. all on wheels, which allows us to go a little further than conventional tourism takes us, at least on a trip of this kind across Europe.

Maybe in Asia, a backpacking trip is able to take us to places we could not go by motorhome.

Traveling for many months with only a backpack and from hotel to hotel ends up being a lot more tiring than traveling like this, always with our home ” on the back ”, where we can stop anywhere, and have dinner overlooking a lake or  a beach .. it really is a unique feeling.

Of course, not everything is roses, and there is one point or another that aren’t so good.

One of them is that we always end up being a little afraid when we leave the camper, because we have all our belongings there, for example when we went to Zakynthos, which is a Greek island and we had to leave the van 3 days at the port we were in some fear.

The other negative point is that we are always dependent on possible mechanical problems and any problems that may happen.

The problems can be small, like a broken water pipe, as we had in England that is insignificant, or a large one, for example when we had to pay 500 € and spent 2 weeks in Poland to change a clutch.

There is another point in this category, of possible mechanical problems, which is to have such a serious mechanical problem that depending on the country in which we are may imply the end of the journey. If we had had the problem of the clutch kit in Norway, we might have had to pay something around € 2 000, which would have forced us to shorten the trip.

However the worst is even the possibility of having an accident, or someone coming against us with another car … but the truth is that this already surpasses us ….. we can fly to Paris, leave the airport and be run down in the first street .. what we have to do is try to handle situations in the best way and in this case, drive with caution. 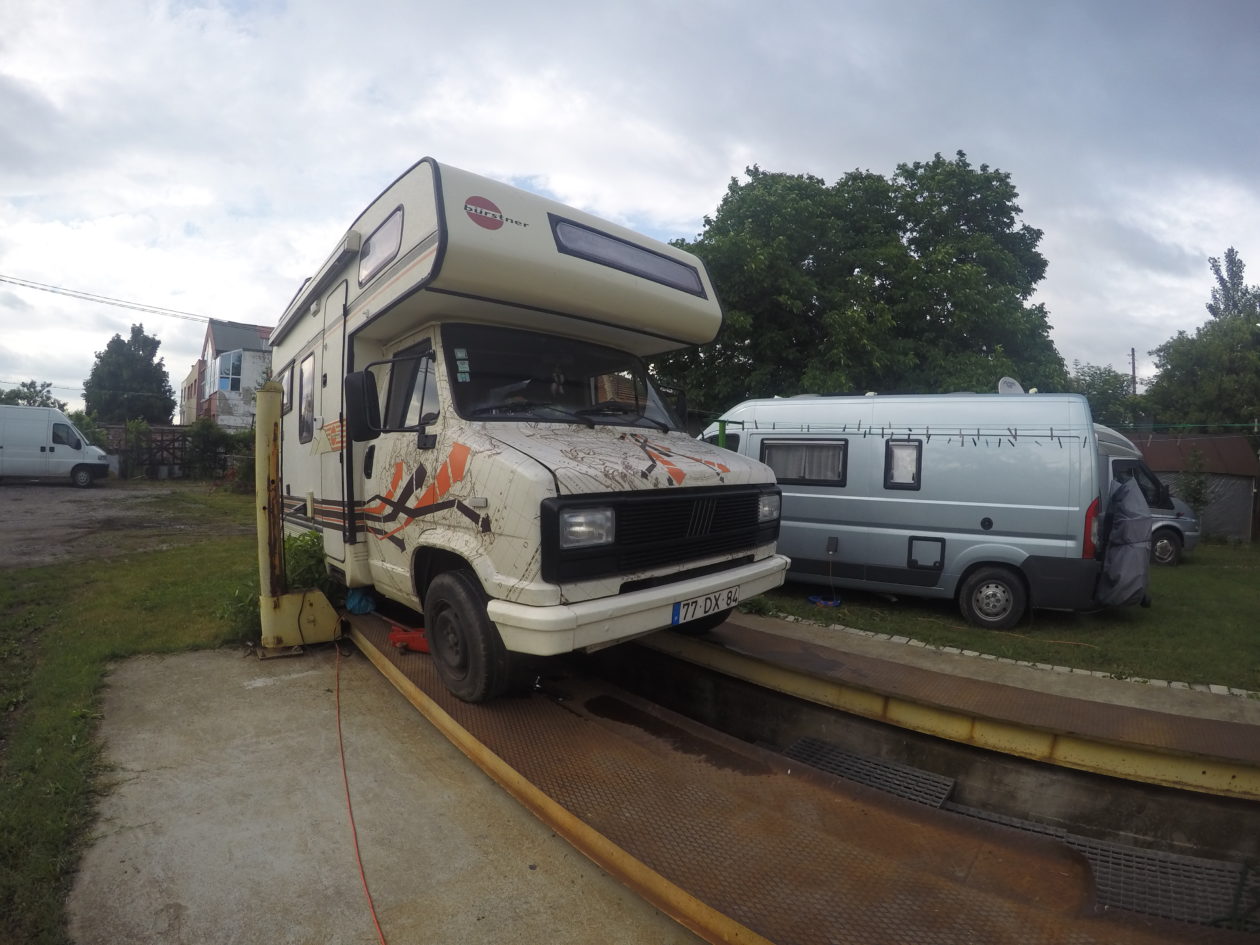 We always believed that everything would go well and the problems we had, we would solve … and that’s exactly what happened.

The problems on the one hand are good because they give us the possibility to deal with them and solve them, when our motorhome did not start up in Ukraine, where nobody spoke English, there were no trailers or even insurance for that country, it seemed that we were fucked up… but the truth is that we have managed to solve the problem and we have come out stronger from this situation!

In fact, if I could choose, I would choose to have happened there, somewhere else, because it turned out to be a situation to remember later, and for the rest of the trip we were never afraid of any future problems, because worse than we had been, was complicated.

when and where to buy?

For those who have a limited budget like ours, there aren’t a lot hypotheses regarding where to buy the motorhome, other than the usual websites selling cars and used items such as OLX, ebay. ..

The other option is to old friend friend’s way of selling a caravan or something. For those with a larger budget, you can always see in Stand’s, but prices will always be influenced.

Renting a motorhome for such a long period is completely impractical because apart from being almost impossible to find someone to rent for so many months, the value would be almost the price of buying a new one.

For those who wanted to rent for periods of one or two weeks, the value will never be less than € 60 per day (in Portugal and private), in a motorhome company normally the amounts are at least € 150 / day.

There is another option that is to make our own house on wheels! This option was on the table for us, in case we could not get the money we needed, because it is a much more economical hypothesis.

In this case, the budget drops to less than € 5,000, and we are already thinking about a minivan in good condition and a bit more recent, a friend of us for example made a van by himself for 3000 € all inclusive.

During our trip we saw many people traveling in camper, and we found that the only downside is just the fact that sometimes the van’s don’t havebathroom.

After a while, and traveling in winter and in cities, can become a small problem, but nothing that can not be solved.

The best time to buy a motorhome tends to be in the winter, because it is when more people want to sell and less people want to buy, we bought ours in September and we sold in October, out of curiosity in the year we were traveling, the market of used motorhome in Portugal has changed slightly and prices have risen.

Our caravan cost us 8500 € and we sold for 9500 €, however when we bought it it was common to have enough caravans for this value and now they are rare.

Photos of our motorhome

2 thoughts on “Home on wheels”